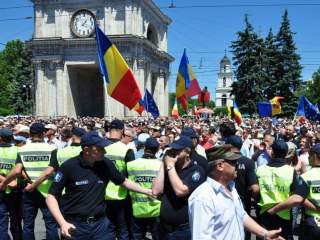 Half the size of Scotland, tucked between Romania and Ukraine, Moldova is the least-visited and poorest country on the European continent. Life centers on the sat, the “village.” The road into each is marked by a Soviet-era sign that spells out its name in cement block letters of red or grey. Many lack piped water. Steel buckets are chained to communal wells, shielded from crop dust by pitched roofs of bark. Ribbed horses bring in the harvest, still often the work of scythe and cart. At major intersections you are likely to confront a bony Christ hanging off a cross; beneath his toes, votive candles smolder in a cabinet of smoked-out glass. There are few public monuments. In a town called Florești, a rusted-out SU-15 fighter jet has been impaled on a three-story cement spike. A Lenin statue in Sukleia was beheaded the year after the Soviet Union fell; five years ago, Lenin was given a new head, too large for his torso. Now and then on a country road you hear the revving of a tricked-out BMW or Mercedes, the prize of a parvenit, a “profiteer”—one of the Moldovan boys who fled school, went to Russia to make his fortune and returned home loaded with cash.

Moldova was recently ruled by one Vlad, has fallen largely under the control of two Vlads, and is now coveted by a fourth Vlad. The first is Vladimir Voronin. In 1993, Voronin—a KGB attaché in Moscow throughout the late 1980s—returned to Chișinău, Moldova’s capital. Out of the ruins of the Soviet Communist Party, banned in Moldova after 1991, he erected a new party, the Moldovan Communists. It surged into parliament in 1998. Three years after that, Voronin won Moldova’s presidency. Gradually his allegiances tacked from Moscow to Brussels, which began funding public works in Moldova in 2005 in order to lay the groundwork for European Union accession, which is today all but unthinkable. “A friendly calf sucks two mothers,” Voronin answered his anti-EU critics, borrowing a line from Dostoevsky. To the seven in ten Moldovans who favored EU integration, Voronin’s rhetoric bore too little in practice. In April 2009 he was ousted, the work of a light revolution: Thousands of Moldovans packed National Assembly Square in Chișinău, demanding recall elections after Voronin secured his fourth consecutive parliamentary majority—only, the claim went, by distributing multiple ballots to his supporters. WikiLeaks later revealed that Voronin offered a ten-million-dollar bribe to a rival politician in a bid to preserve power. Protests turned violent. Demonstrators hurled furniture through the windows of state offices, which were scaled and draped with EU flags. Moldova’s 1991 Declaration of Independence was incinerated. There were cries in the crowd for unification with Romania—a broken dream of many Moldovans who see no other way toward a European future. Voronin’s sympathizers, overwhelmingly Moldova’s Russian-speakers, saw the situation differently: Europe’s fascists were upending Moldova’s Communists. For the next three months of 2009, Moldova existed without a government. Recall elections were held in July. Vlad Voronin was out.

Enter a pair of billionaires who despise one another. Their names are Vlad Plahotniuc and Vlad Filat, but Moldovans just call them the Vlazii, “the Vlads.” They are upstarts, unconnected to the old Soviet nomenklatura. Each is in his forties, identifies as an ethnic Romanian and comes from a tiny farming village in the Bessarabian plain. Technically they wield no more power than any other Moldovan politician—Plahotniuc doesn’t actually hold an office—but virtually nothing can be done in Moldova today without them. Slowly under Voronin, with fervor after his collapse, these two carved out their own zones of authority within the state: each privatized a political party out of his own pocket, and each used that party to seize personal control of different government sectors. Plahotniuc runs Moldova’s Judiciary and its National Anti-Corruption Center; Filat opted for its Customs Ministry. These are now the nodes through which every reform, law or political decision must pass in Moldova.

The Vlads’ early years in Russia and Romania, told to me in bits and pieces in my discussions in Moldova, are a goulash of shady, opportunistic, often ruthless acts, often recounted with equal parts awe and fear. Truth and lore here can be difficult to separate. What is clear is that power was amassed, and around the same time that Voronin took power, the Vlads pivoted back to Moldova. They shopped for old state assets. Plahotniuc started collecting TV channels and banks. Of Moldova’s five news networks, he owns four. He has a controlling interest of Victoriabank, Moldova’s third-largest bank. Filat went for border posts, from which he sends truckloads of unstamped Ukrainian cigarettes across the Prut River into Romania. Between the hotels, casinos and nightclubs of downtown Chișinău, little now falls outside the control of the Vlads. A Moldovan joke: “I hear Vlad Filat plans to buy Moldova today,” one villager says to another. “Impossible!” runs the reply. “Vlad Plahotniuc’s not selling it.”

The fourth Vlad is Putin.

Moldova is the murkier front between Putin and the EU. His strategy is to prevent Moldova’s EU accession by capturing the state softly, from within. In late 2013, after Chișinău ratified an EU Free Trade Agreement, Putin began pouring money into Moldova’s Socialist Party—a band of Communists defected from Voronin and led by Igor Dodon, a Putinist purist. The party now controls one in four parliamentary seats. It is a legislative ram with which Putin could federalize Moldova into a collection of regions that hold veto powers over one another. In Ukraine, where Putin has pursued a similar strategy, he used armed incursion to create potential territories out of Donetsk and Luhansk. In Moldova such territories are already lying in wait: the country’s two biggest Russian-speaking enclaves became autonomous in the 1990s. One is Transnistria, a self-governing rust belt splayed along the banks of the Dniester River. The other is Găgăuzia, a swathe of the Black Sea steppe inhabited by 160,000 Oghuz Turks who converted to Christianity in the later years of the Ottoman Empire.

In late May I took a bus to Comrat, capital city of Găgăuzia, a bleak, undulating stretch of plain. The Gagauz are tough people—Romanians call them răzeşi, “men of the earth.” In August 1990, an insurrection of Gagauz farmers brandishing machetes was crushed when Chișinău dispatched busloads of peasants, emboldened by vodka, to the region. Today, endemic poverty has driven many Gagauz teenagers into rural gangs. Last February, weeks before Crimea’s annexation, the Gagauz held a referendum. Yuri Yakubov—a Moscow tycoon who claims to have Gagauz origins—paid for the printing of ballots. Members of Russia’s Duma travelled to Comrat to ensure a fair electoral process. 98 percent of the Gagauz voted in favor of regional integration into the Russian Customs Union; in the event of Moldova’s entrance into the European Union, or of Moldova’s unification with Romania, they said they would declare their independence from Moldova. That spring, an unknown number of Gagauz youths made their way to the conflict in Ukraine. One was found among the dead anti-Maidan protestors in May’s Odessa clashes. Anatoli Cara, a former minister of sport in Găgăuzia, went to Rostov-on-Don to build camps for Gagauz men to train. At least one hundred Moldovans are known to have attended them.

This past March the Gagauz voted in a new başkan, “chief,” a woman called Irina Vlah, a close associate of Dodon. “Ms. Vlah wasn’t elected,” Oazu Nantoi, the former Moldovan presidential candidate, told me. “She was installed.” Nikolai Valuev, the seven-foot-tall boxing champion that Putin dispatches to Crimea to rouse up crowds, came to Găgăuzia to campaign for her. So did Anatoly Karpov, the Russian former world chess champion. On my second morning in Găgăuzia, three black SUVs rolled slowly through the center of Comrat. Men streamed in from the fields to watch with curiosity as the yabancilar, the “outsiders,” stopped outside town hall. The door of the lead car opened; out came a tall Tatar in a well-cut suit and gold-rimmed glasses—Farit Mukhametshin, Russia’s ambassador to Moldova. Next came Aleksei Alexeyenko—spokesman for Rosselkhoznadzor, Russia’s phytosanitary surveillance agency. An entourage of advisors floated behind them. The men moved with heavy purpose into the town hall, past a cast-iron statue of Lenin leaping into a train carriage.

Başkan Vlah, dressed in a teal blue suit, sat at the head of the table. Three small flags dangled in front of her: those of Găgăuzia, Moldova and Russia. She introduced us to her cabinet: sixteen Gagauz in suits starched with sweat, along with two big men in uniforms—“Gagauzian security officials.” The Gagauz were interested in mechanizing their farm equipment. The Moscow delegation had come to help.

“Our two peoples share the same values: land, labor, Orthodoxy,” Mukhametshin told the room. “Sure we’d like to get some machines to you. Găgăuzia is small enough that Moscow could send technicians to every single one of your fields. But what’s necessary is getting private investors interested in this cozy little country of yours.”