Mongolia: The Next Asian Tiger? 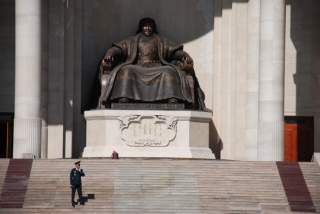 The news of July’s agreement in principle of the Mongolia-Japan Free Trade Agreement (FTA) was merely another addition to Tokyo’s stable of trade agreements in Asia. But for Mongolia, the trade pact with Japan is of far more significance—and not merely because it was with the world’s third largest economy. The conclusion of negotiations represents Mongolia’s official entry into East Asia’s proliferation of trade agreements, as this is the country’s first FTA. Meanwhile, Ulaanbaatar is also studying proposed agreements with South Korea and China.

But will Mongolia’s drive for FTAs and a greater push for economic regionalism help its economy? After years of soaring economic growth, the Mongolian economy has precipitously cooled over the past year with a sharp decline in GDP growth and a looming deficit of foreign direct investment (FDI). Indeed, Ulaanbaatar remains heavily dependent on the mining sector for its economic fortunes, which have been battered over the past two years due to the sinking price of coal as global supply outpaced demand. But while the demand for coal is once again slated to surpass supply in the coming years, Mongolia’s FDI numbers remain low.

Over the first six months of 2014, FDI to Mongolia dipped more than 70 percent as compared to the year before. This lack of capital flow compounds an already sizable challenge facing the Central Asian country, which saw its FDI numbers halved in 2013 after record growth in previous years. In addition to concerns about FDI in its minerals sector, Ulaanbaatar’s economy is likely to continue to feel pain in the coming years as a result of significant economic imbalances due to government policies aimed at stimulating economic growth. Without improved FDI flows, Mongolia’s trade imbalance—currently under -10 percent—will likely worsen as the country continues to depend on imported energy and infrastructure, rather than focus on strengthening its exports.

According to the most recent World Bank report, other key sectors are faltering too—such as agriculture, electricity and construction. These economic pressures are contributing to double-digit inflation in Mongolia and less purchasing power for domestic households. This inflation is also contributing to an already overheated housing market in Mongolia that is rapidly increasing household debt.

The news of the FTA with Japan—a significant source of regional FDI—is a good sign for kick-starting Mongolia’s drive to improve its investment appeal. But FTAs won’t be the only solution here. The government of Mongolian president Tsakhiagiin Elbegdorj continues to try to repair Mongolia’s international image after it rounded circles on its mining investment regulations over the past couple years. The new investment law has been more transparent and less restrictive than previous legislation, which handcuffed foreign investors and curtailed large investments in key projects, such as the multibillion-dollar Oyu Tolgoi copper mine.

What can Ulaanbaatar do to change the course of its economic fortunes? There are a number of domestic policies—including reigning in spending and attacking inflation—that are necessary, as noted previously. There are also key foreign-policy actions that Mongolia should undertake. First, Mongolia must address its FDI gap with a full-court press on international investors and a more transparent environment to court multinational companies. Second, Ulaanbaatar needs to recognize the limits of its “third neighbor” policy—which focuses on diversifying Mongolia’s strategic partnerships beyond Russia and China. While the policy has been, in general, a success story, Mongolia must work harder towards also pushing for stronger economic and investment ties with Beijing and Moscow.

Mongolia’s recent history as a landlocked vassal to these superpowers has understandably cautioned Ulaanbaatar’s appetite for stronger ties. But despite historical resentment, most acutely focused at China, Mongolia must remain pragmatic in order to maintain its economic success of the past decade. This pragmatism was on display during Chinese president Xi Jinping’s two-day visit to Mongolia last month. The visit, the first by a Chinese leader in over a decade, was a significant step towards an improved economic relationship between Beijing and Ulaanbaatar. During Xi’s visit, both sides agreed to elevate their relationship and enhance economic cooperation in the minerals sector and also in areas such as infrastructure development. Beijing also relished the opportunity to attempt to upstage Japan’s surging engagement with Mongolia.

Ties with Russia also remain vital to Mongolia’s prosperity and Elbegdorj has looked to enhance the relationship with Moscow, despite strong international pressure against Russia due to its actions in the Ukraine. At the recent Shanghai Cooperation Organization (SCO) summit in Tajikistan, Elbegdorj took part in a trilateral summit meeting with Xi and Russian president Vladimir Putin. During the meeting, Xi proposed the three countries create a trilateral “economic corridor” that would serve as a modern-day Silk Road.

But while the prospects of large FDI numbers from Beijing and Moscow are appealing, Mongolia will have to tap-dance around the geopolitical pressure from both. This maneuvering is becoming increasingly more difficult as both Moscow and Beijing seem adverse to U.S. and Japanese efforts to strengthen partnerships in the region. Indeed, Xi demonstrated this baggage during this week’s trilateral summit by inviting Mongolia to next year’s commemoration of the 70th anniversary of the end of World War II—an opportunity to celebrate “the victories of the World Anti-Fascist War and the Chinese People's War of Resistance Against Japanese Aggression.” In other words, Ulaanbaatar’s ability to balance its economic needs with its desired geopolitical trajectory will be put to the test in the coming years, especially if its economy fails to regain momentum.

J. Berkshire Miller is a fellow on Japan and Chair of the Japan-Korea Working Group with the Center for Strategic and International Studies Pacific Forum. Follow him on Twitter: @jbmllr.