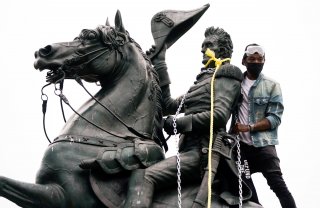 The war against the past took another step last night when a motley crew of demonstrators chanting “Hey, hey, ho, ho, Andrew Jackson’s got to go” sought to topple the equestrian statue of Andrew Jackson from its plinth in Lafayette Party. Old Hickory withstood the assault and the U.S. Park Police and DC police force dispersed the mob that tried to exercise a form of vigilante justice. But it may only be a holding action. While an “autonomous zone” may not be allowed to form in Washington—on Monday afternoon, DC police dismantled an incipient tent city on H street—it became clear to me early this morning after visiting downtown that the demonstrators have already established something of a foothold in Lafayette Park and Black Lives Matter Plaza. In staging his photo op outside St. John’s Church a few weeks ago, President Donald Trump inadvertently triggered the rise of what appears to be a free-floating encampment.

There weren’t many demonstrators around this morning. It was predominantly the news media feasting on the events of last night. Lafayette Park, which is blocked off by a fence, looked fairly intact, but Jackson’s statue was not. The word “Killer” was emblazoned in black spray paint on his plinth. Jackson has come in for a drubbing for his brutal treatment of American Indians. 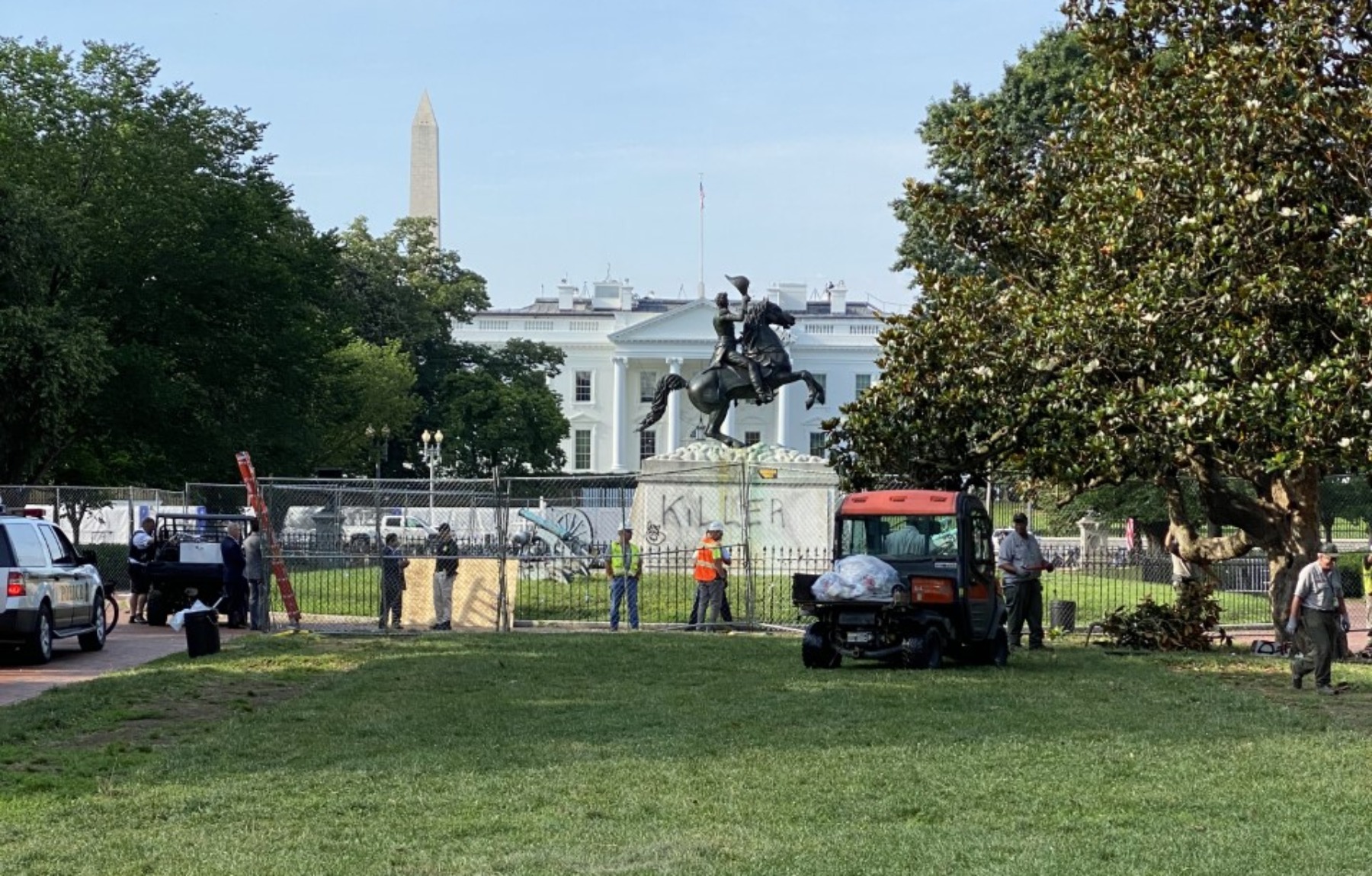 But it’s also bizarre that Old Hickory is being denounced by the left tout court. For many decades he was a hero to liberals. Jackson was a founder of the Democratic party; a staunch populist; an opponent of moneyed, aristocratic elites; and a foe of banks as well as the electoral college. Arthur M. Schlesinger, Jr. won a Pulitzer Prize for his biography The Age of Jackson, depicting him as a precursor of Franklin Roosevelt and the New Deal. Now it seems that Jackson, who has been embraced by Trump, who probably never heard of him until Steve Bannon mentioned his name, is a tyrant and an ogre for the ages rather than a flawed product of his time.

The police may manage to keep Jackson intact for now, but Lafayette Park and its immediate environs are in the hands of the protesters. They have everything they need to keep going—tents, food, hand sanitizers, and port-a-potties. The atmosphere was subdued this morning, but the tone remains militant. The thousands of posters lining walls range from plaintive—“Democrats and Republicans Will Never Help Inequality. They Are Now Same Party! Are Sold Out Must Start New Party Now, Here”—to exhortatory—“Stop White Terrorism!”—to outright threatening—“We Will Never Conform to Injustice A Change Will Be Made By Any Means Necessary”. 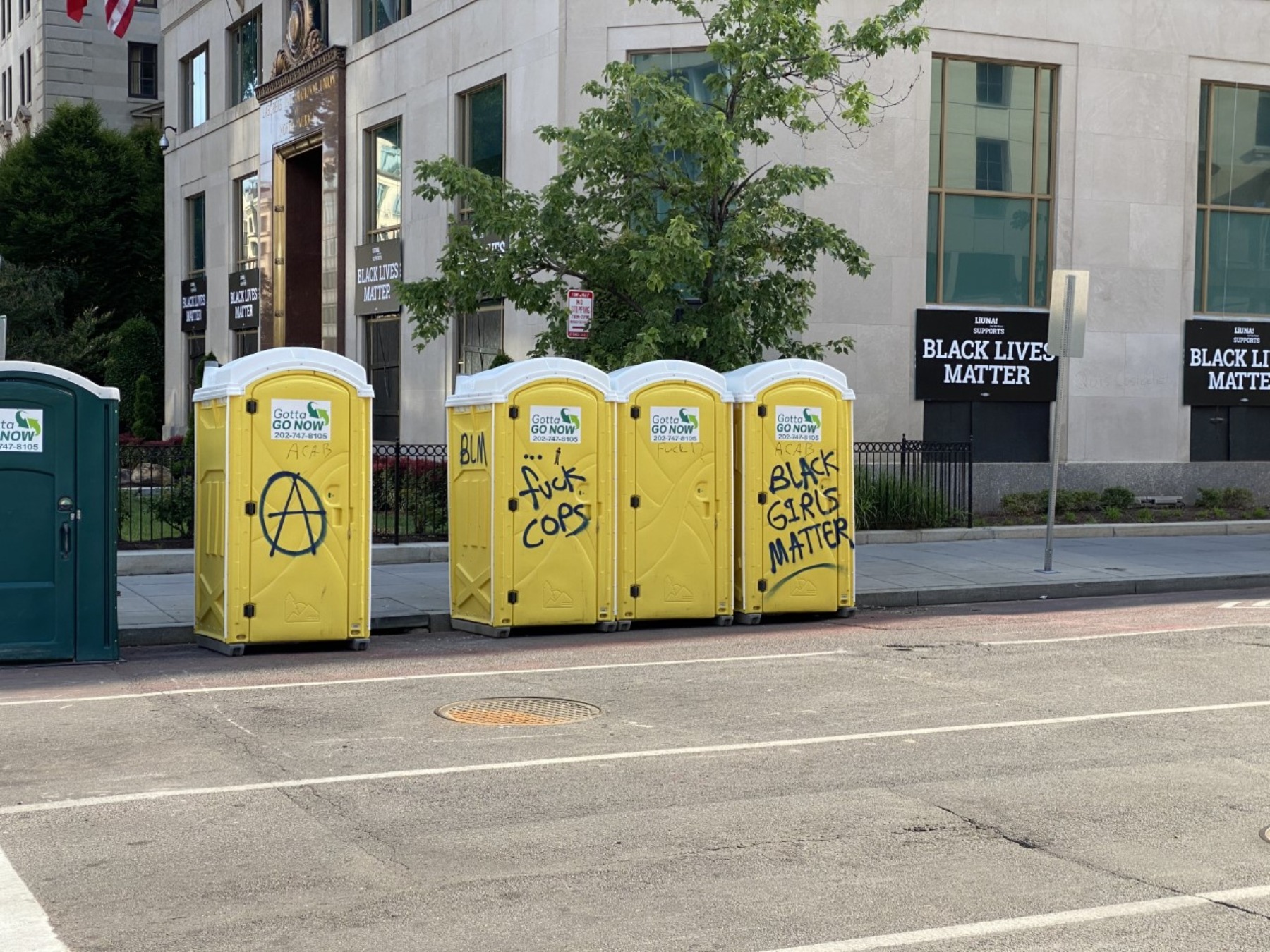 Local businesses, whether from genuine conviction or prudent self-preservation, are encouraging the protesters. The Hay-Adams Hotel, for example, has large banners on each side of its entrance proclaiming “Black Lives Matter” with the Hay-Adams logo embossed in gold. 16th Street, from K Street on down, is blocked to traffic and a rallying point for demonstrators as well as T-shirt vendors selling “Black Lives Matter” paraphernalia. Perhaps most discombobulating is the dilapidated state of St. John’s Church, which serves as a kind of home base for the movement. Any religious services would appear to be a non-starter: instead of the usual advertisements for religious services, the sign outside the church has been vandalized with such messages as: “Real Live On Moms We Not Reloctan Moe On Earl” and the like. What this gibberish is supposed to mean is beyond me. Another cardboard sign prominently displayed outside the church offers such pearls of wisdom as this: “Sex is Cool…But have you ever Fucked the System. Trump Did.” 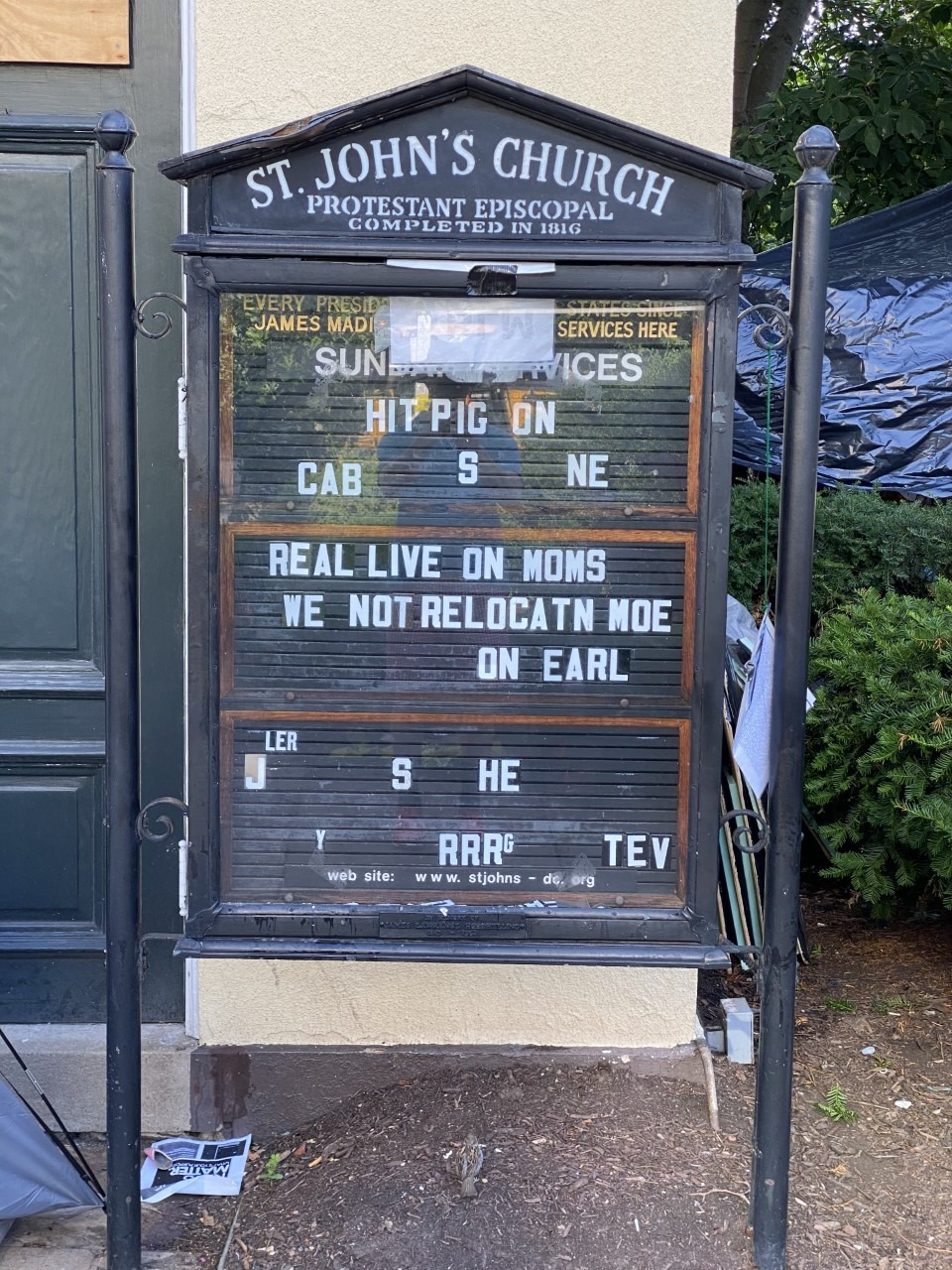 What does it all add up to? This morning, Trump is tweeting, “There will never be an `Autonomous Zone’ in Washington, D.C., as long as I’m your President. If they try they will be met with serious force!” But this is taking the grandiosity of the protesters at their own word. There is unlikely to be an "autonomous zone," let alone a storming of the Winter Palace. The more likely prospect is that Trump will face what amounts to a prolonged siege that he will fulminate about for the rest of the presidential campaign.