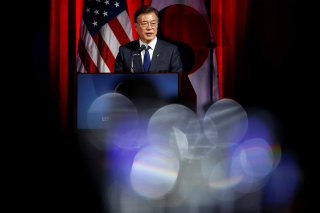 Ousted South Korean leader Park Geun-hye was brought down over a corruption scandal connected with the nation’s powerful “chaebol” conglomerates. Can newly elected President Moon Jae-in succeed where his predecessor failed, while delivering on his economic-policy promises?

Elected leader in May on a platform of reducing inequality, creating jobs and ending cozy ties between government and business, Moon’s five-year economic plan, announced July 25, would not have disappointed supporters of his Democratic Party.

Under Moon’s plan, the minimum hourly wage will be raised by more than 30 percent over the next five years, with increased jobs for bureaucrats along with higher taxes. The chaebol, whose sales account for more than half the entire economy, will face tighter regulations, including increased taxes and restrictions on cross-shareholdings and anti-competitive practices.

The plan also offers incentives for businesses to invest domestically, while requiring the public sector to convert more “non-regular” workers to permanent employees, as well as doubling subsidies for women on maternity leave.

Despite Moon’s party holding only 40 percent of the seats in parliament, his plan got off to a good start after winning parliamentary approval for 11 trillion won ($9.8 billion) supplementary budget. However, the parliament trimmed about 150 billion won from the initial budget, with opposition lawmakers criticizing the recruitment of more bureaucrats as a “populist act.”

Nevertheless, with the Bank of Korea expected to maintain accommodative monetary policy throughout the rest of 2017, Moon’s fiscal and monetary boost aims to lift gross domestic product growth to 3 percent this year and next, the fastest pace since the 3.3 percent GDP gain posted in 2014.

Bucking the global trend toward lower business taxes, on August 2, the Moon administration announced plans to hike taxes on companies with profits exceeding 200 billion won ($177 million), to 25 percent from 22 percent, starting in 2018.

According to South Korea’s finance ministry, 129 companies will be affected, including heavyweights such as Hyundai Motor and Samsung Electronics.

“We will optimize tax burdens mainly for big corporations which are relatively in better situations,” the ministry said. “With the additional revenues, we will support the underprivileged and marginalized companies, contributing to social integration and economic cooperation.”

The ministry says the tax increases, which need to be approved by the National Assembly, will raise an extra 5.5 trillion won a year. The plan is expected to be submitted by September 1 to parliament, where it may face further trimming from opposition lawmakers.

The government aims to pay for Moon’s spending plans while keeping the ratio of government debt to gross domestic product (GDP) under 40 percent, according to Finance Minister Kim Dong-yeon. This is despite plans to lift government spending at a faster rate than the nominal growth rate, currently estimated at between 4.5 to 5 percent.

Yet even if the reforms secure parliamentary passage, even more tax hikes could be necessary to prevent a budget blowout.

The reaction of the financial markets to Moon’s tax hikes was swift, with the benchmark KOSPI index dropping by almost 2 percent the day after the announcement, its second-biggest one-day fall since November. Samsung was hit hardest with a 2.5 percent drop in its share price, coming after the conglomerate’s recent record quarterly profit of around 11 trillion won.

Yet according to Bloomberg data, the increased tax might only affect ninety-two companies, which are already paying an average effective tax rate of 26 percent.

In addition, the extra tax deductions planned under Moon’s reforms could further reduce the burden on the chaebol, while still giving Moon political kudos from his apparent crackdown.

Moon declared in his inaugural speech to the National Assembly that his administration would ensure “politics-business connections will disappear” as part of his reform of the chaebol. Yet previous leaders, including Park, have made similar pledges, and Moon’s lack of a parliamentary majority could stymie his efforts.

“The [Economist Intelligence Unit] does not expect any onslaught against the chaebol, as their contribution to the economy remains decisive. However, we believe that Moon Jae-in will make a significant breakthrough on this issue, with a host of amendments to the Monopoly Regulation and Fair Trade Act beefing up the regulatory framework around the chaebol and its enforcement,” the EIU said in a June report, “South Korea: Making up for lost time.”

Nevertheless, Moon’s so-called “chaebol sniper,” Kim Sang-jo, who was appointed as head of the Fair Trade Commission, has indicated a more conciliatory approach.

“Chaebol reform is never about destroying or disbanding chaebols. Chaebol reform is about helping and inducing them to grow into important assets in the South Korean economy through rules,” he said at a news conference.

He also said unravelling cross-shareholdings among the group affiliates that help cement family control was “not an urgent matter,” as chaebol such as Lotte Group had addressed the issue themselves.

The Korea Chamber of Commerce and Industry has resisted efforts to reform the chaebol, saying lawmakers “shouldn’t twist the arm of the conglomerates.”

Moon’s plans for labor-market reform also face significant challenges without business backing. Already, the administration has sought assistance from the chaebol, having involved the Korea Employers Federation in a key government committee on job creation, despite having previously criticized it for employing more irregular workers.

Before his first talks with President Donald Trump, Moon’s administration liaised closely with the chaebol to ensure a positive outcome, by promising nearly $13 billion of Korean investments in the United States.

With exports accounting for around half of South Korea’s GDP, Moon is under pressure not to throttle the nation’s economic engine if he is to achieve his growth targets.

“The new administration must understand that economic growth is impossible without our cooperation,” a chaebol executive told Japan’s Nikkei newspaper.

The latest GDP data showed the economy expanding by 2.7 percent in the June quarter, helped by increased consumer spending and business investment. However, exports fell by 3 percent amid continued pushback by China over South Korea’s deployment of the THAAD missile defense system, which has hit companies such as Hyundai and Lotte.

Record household debt has also constrained consumer spending, with the central bank expected to keep interest rates at a record low 1.25 percent for the remainder of 2017.

In its latest forecasts, the Asian Development Bank projected that South Korea would post 2.7 percent GDP growth this year and next, a slight improvement on last year’s 2.5 percent expansion.

Nevertheless, along with the dispute with China, the nation’s biggest trading partner, the International Monetary Fund has warned of a number of structural headwinds for South Korea, including “unfavorable demographics; heavy export reliance; pockets of corporate vulnerabilities; labor-market distortions; lagging productivity; a limited social safety net; and high household debt. Inequality and poverty are also of concern.”

Other potential trouble spots for the Moon administration include Trump’s demand to renegotiate the “horrible” U.S.-South Korea free-trade agreement, which Seoul has resisted, while the threat of war on the Korean Peninsula has ratcheted up due to North Korea’s escalation of its missile tests. Pyongyang thus far has shown little inclination to respond positively to Moon’s tentative rapprochement.

With the next parliamentary elections not due until 2020, Moon will have to prove a master negotiator on both the domestic and foreign-policy fronts to deliver on his promises.