Moscow Lashes out against Stalin Film 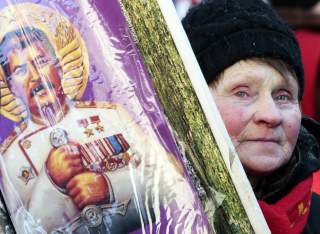 On the eve of a presidential ballot widely expected to re-elect Russia’s president Vladimir Putin for a fourth term in office, Moscow is once more engaged in a battle with history. This time, it is Scottish writer and director Armando Ianucchi and his film The Death of Stalin—which opened in the United States on March 2—who has provoked official Russian ire.

Ianucchi’s film is set in Russia in 1953 and several of its principal characters are Soviet officials: Nikita Khrushchev, played by Steve Buschemi, Vyacheslav Molotov, played by Michael Palin, and Lavrentii Beria, played by Simon Russell Beale. The movie has been adapted from a French graphic novel and is based on real events surrounding Stalin’s death and the subsequent crisis over who would succeed him.

Western reviewers saw the film as a satire of Western politics in the context of growing European populism. A 2017 BBC review of the film described it as something that “might echo most pertinently with baffled observers of Trumpland,” a film that “confirms your worst fears about what politicians say and do behind the scenes.” Ianucchi wrote the film before Trump’s election, however, to reflect broader trends in Western politics rather than developments in America specifically.

Despite the film’s apparent non-Russian targets, official audiences in Russia have nevertheless seen it as disrespectful and dangerous.

Russian contemporary politics have propagated a view of Stalin as the leader who brought Russia’s bloodiest war to a successful conclusion. With this in mind, and as Russia’s presidential election approaches, it is perhaps unsurprising that the Russian government banned the film on January 23, invoking a 2016 law. Russian Culture Minister Vladimir Medinsky commented that the banning of the film was “not censorship,” but that though the Russian state is not afraid of “critical and impartial evaluations of [their] history…there is a moral line between critical analysis of history and the mockery of it.”

The controversy continued when two Russian commentators appeared on television to discuss the ban and ended up brawling with one another. The duo, Nikolai Svanidze and Maksim Shevchenko, had been asked to answer the question, “Is Stalinism a bad thing?” “You’re defending Stalin,” said Svanidze. “I am defending history!” Shevchenko shot back.

Whether it intended to or not, the film has definitely hit a nerve among nationalist hardliners who decried it as “an abomination and filth.” Putin has not commented on it, but numerous others are discussing it. The most revealing thing said about the film by its critics was reported by the Associated Press. Vladislav Kononov, executive director of the government-sponsored Russian Military-Historical Society, tore into the film’s portrayal of Stalin’s inner circle, stating that “They could have been tyrants, but they weren’t idiots. It’s how the West sees our people.”

Shevchenko echoed this on air, telling “Komsomolskaya Pravda listeners that the Soviet era was a “singular” era in the history of the Russian people. Under the Soviets, he said, “The rulers did not act on the behest of the West and not with the West’s knowledge…The state acted in the interests of the people, and nevertheless developing social systems, systems of healthcare, scientific systems and so on.”

That mockery of Stalin could be a matter of moral outrage and even illegality is directly tied to his continuing popularity in Russia. According to a Levada poll on the “leading people” of history, Stalin topped the list as the greatest leader of all time for Russians, with 38 percent of the 1,600 surveyed granting him the ranking of number one. He has seen an unsteady rise in popularity since the poll began in 1989, receiving 12 percent of the vote then, peaking at 42 percent in 2012, and now sits at the top, while current president Vladimir Putin and the renowned nineteenth-century poet and “Russian Shakespeare” Pushkin tying in second at 34 percent. Lenin, who received 72 percent of the vote in 1989, is now ranked fourth at 32 percent. Denis Volkov of Levada, in an editorial with RBK, commented on Stalin’s strange return to popularity in the public sphere.

“Across the country,” he wrote, “Here and there like mushrooms after the rain, appear busts and commemorative plaques of the ‘great leader.’”

Upon his death in 1953, Stalin’s godlike position in the national consciousness received a potent blow from the 1956 “Secret Speech” of Nikita Khrushchev denouncing the tyrant. Briefly, there was a rash of publications that were permitted to criticize Stalin’s dictatorship. Alexander Solzhenitsyn’s One Day in the Life of Ivan Denisovich was the first Soviet work to expose the horrors of the GULAG system for public consumption. No longer was the Great Terror something whispered about behind closed doors: Stalin could be condemned out in the open, though the Soviet government continued to withhold records of what occurred under his leadership. Stalin’s image was somewhat rehabilitated under Leonid Brezhnev, who reversed Khrushchev’s liberalization policies and staged the first public trials since Stalin’s death, then was again pushed away by liberalizing leaders Mikhail Gorbachev and Boris Yeltsin. Now, under Putin, Stalin’s ghost rises again as a proxy for Russians supportive of—and opposed to—Russia’s current leader.

Putin had much to say about Stalin, asserting in an interview with Oliver Stone that while “the horrors of Stalinism” certainly existed, “excessive demonization of Stalin is one of the ways Russia's enemies attack it.” Shevchenko said something similar, though framed strictly in domestic political terms: “Russia isn’t returning to the Stalinist period,” he concluded. “The banning of the film…is not linked to the fact that Putin’s elite love Stalin so much, but to the fact that it would give the Left strength.”

The myth of Stalin and his role in World War Two have coincided with Putin’s more assertive role on the world stage. “This is not a coincidence,” wrote Volkov in his RBK column. “The [Crimea] events were taken by the population as a sign of the restoration of the country’s greatness – the same greatness which many people feel was created during Stalin’s rule and lost after the collapse of the Soviet Union.”

By elevating World War Two, or the Great Patriotic War as it is known to Russians, and by extension, Stalin’s leadership during it, to monolithic proportions, Putin can subvert the credibility of critics in Russia and abroad. “War is one of the things that legitimize the Putin regime: It names itself the inheritor of the victory that is sacred for all Russians, and therefore, the government is above all criticism,” according to Carnegie Moscow Center senior associate Andrei Kolesnikov in a Washington Post interview. “If you criticize the government, you are criticizing Russia.”

Policy-wise, banning The Death of Stalin reflects the current Russian government’s unwillingness to give an inch to Western powers when it can help it, especially when 68 percent of Russians consider the United States their primary enemy. Sanctions have not, and likely will not, convince them to soften their stances on Ukraine, Syria, or their interference in United States politics. The fact is that since 2000 Putin’s government has cultivated a public sentiment that Russia is a heroic nation that needs to take back its place as a leader on the world stage.

The banning of The Death of Stalin may be a signal of Russia’s authoritarian present, but it is even more valuable as a measure of a regime suppressing the horrors of the past in order to legitimize a government, one that has yoked itself to a history when things were better, with the implicit promise that life will become great again. It is a mark of national consciousness so desperate to regain its glory days that it cannot tolerate jokes that are directed at it, even when they aren’t.

Meagan Ford is an intern at UCLA’s Center for World Languages.