Moscow's Perspective: The West Is Responsible for Navalny’s Poisoning 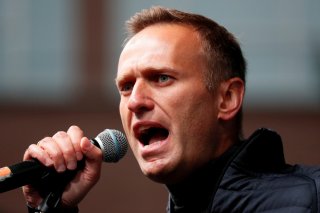 The European Parliament is calling for new restrictive measures against Russia in relation to the poisoning of opposition member Alexey Navalny. Moreover, the European Union minister for foreign affairs, Josep Borrel, is calling for a new sanctions package in the name of Navalny, following the example of the Magnitsky Act. In its resolution, the European Parliament calls for halting construction of the Nord Stream 2 pipeline and freezing the assets of those involved in the Navalny investigation. This amounts to several hundred people, including some from the highest echelons of the Russian government, among them the current prime minister, Mikhail Mishustin, former president and prime minister Dimitry Medvedev, as well as high-ranking security officials and heads of major state corporations.

In Russia, officials call Alexey Navalny a blogger, in Europe and the United States, a politician and one of the best-known opponents of “Putin’s regime.” The EU is confident of the fact that the Russian opposition figure was poisoned. In the words of German Chancellor Angela Merkel, “The presence of poison in the tests is beyond doubt. We can say with certainty: Alexey Navalny was the victim of a crime. It was an attempt to silence him.”

Consequently, in the West they speak confidently about the involvement of the Russian state, rather than private entities. There they believe that this could happen only with the Kremlin’s approval. Russia denies all charges, especially those relating to the alleged participation of its security services. Moscow points to the fact that it would not be profitable for the authorities to publicly eliminate their opponent: firstly, it would raise a wave of domestic discontent and strain the already tense relationship with the United States and Europe. And second, the choice of elimination means, i.e. “Novichok.” Why use a substance, which would point directly to the involvement of Russian security services? Finally, there is the fact that among the targets of Navalny’s anti-corruption campaign were quite a few figures in Russia with significant resources. The man, it must be said, was not without enemies.

The Kremlin itself continues to wait for reliable evidence from Berlin: “There is too much absurdity in their narrative to simply take their word for it, so we have no intention of taking their word,” said Vladimir Putin’s press secretary, Dimitry Peskov. The Russian Ministry of Foreign Affairs in turn will consider this narrative just an excuse to implement new restrictive measures. “If it hadn’t been Navalny, they would have thought up another reason to roll out additional sanctions,” asserted Minister of Foreign Affairs Sergey Lavrov.

But sanctions are just sanctions, and the chances of finding out what really happened grow smaller by the day. And there are several reasons for this: First, of course, is the difference in the positions of Moscow and the European capitals and the unwillingness to engage in real cooperation. In Russia, they say that no traces of poison were found and moreover, that the supplies of “Novichok” were destroyed long ago. In Germany, they contend the opposite but refuse to offer anything that would support their sweeping statements. And of course, Navalny and his associates are not helping to fill in the gaps in this story. Even in the Instagram photos taken from his hospital bed, they’ve covered the monitor displaying medical data.

Additionally, as it became clear quite recently, only a few hours after news of the poisoning, Navalny’s associates entered his former hotel room and took several bottles of mineral water, bypassed Russian law enforcement, and transported these bottles to Germany on the medical flight with Navalny himself. Consequently, they rendered a proper investigation impossible. Although, of course, there are questions to pose to Russian law enforcement bodies. A month has passed since the incident occurred and still no full-scale criminal investigation was announced. The Russian investigative committee promised to review the facts but claimed a full-fledged investigation is impossible without the transmission of clinical tests from Germany. But German authorities appear to be in no hurry to pass anything on. And instead of taking the initiative in their own hands, demonstrating interest or desire to find and punish the guilty party, the Russian security services are silent, having effectively passed the investigation to the Europeans, and simultaneously created fertile ground for spreading various kinds of rumors.

And what results is the West as an accuser, on the one hand, and complete Russian denial, on the other. And this is already far from the first situation of this kind. Europe instantly labels any incident with “Putin’s critics” as assassination arranged by the Russian authorities and demands an immediate reaction: talk of sanctions is first in line. There were sanctions after the Litvinenko affair, the “Magnitsky Act,” the Skripal poisoning. And also, a formidable list of restrictive measures for a variety of other reasons—for Crimea and the Donbass, for interference in American elections, for Syria, threats of sanctions on Nord Stream 2, and now, in all likelihood, there will be additional sanctions in the name of Navalny.

Russia, constantly finding itself under the pressure of an endless stream of accusations, is already accustomed to this, and sees any claims against it as a component of hybrid warfare, together with the real actions of the European Union, the United States, and the NATO bloc on the Russian border. High-ranking Russian officials have said this repeatedly. And since Moscow cannot respond to all this symmetrically, it resorts to predictable statements in the spirit of the Cold War about the "anti-Russian campaign” and “unreliability of partners". Here, for example, is a statement by Russian Duma Speaker Vyacheslav Volodin, who is known for his particularly strong patriotic position: “After statements of the European parliament, it is justified to say that it is special services of foreign countries that are behind the Navalny situation. If such terms as democracy, international law and justice have any meaning for western countries, they should hold those accountable in the European parliament who initiated such decisions.”

And the result is that we end up in a situation, where everyone does and will continue to do what they are accustomed to, working out their positions out of habit. Each side, stubbornly proving their righteousness, doesn’t even hope for the opportunity for any kind of cooperation or dialogue. Consequently, we probably won’t see any real proof of Alexey Navalny’s poisoning by “Novichok,” or evidence of the contrary. But it doesn't matter because the facts in this situation won't change anything.