MOUs: The Secret Sauce to Avoiding a U.S.-China Disaster? 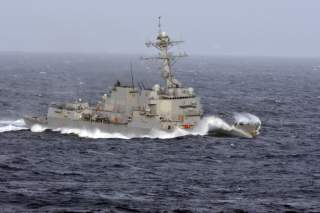 On August 19, 2014, a U.S. Navy P-8A Poseidon maritime surveillance aircraft was flying above the Chinese exclusive economic zone (EEZ) about 220 nautical miles east of Hainan Island in the South China Sea when a People's Liberation Army Navy Air Force (PLANAF) J-11 fighter intercepted it. The encounter, according to Pentagon spokesman Rear Admiral John Kirby, was "very close, very dangerous ... pretty aggressive and very unprofessional. … On three different occasions, the Chinese J-11 crossed directly under the U.S. aircraft, with one pass having only 50-100 feet separation between the two aircraft ... The Chinese jet also passed the nose of the P-8 at 90 degrees with its belly toward the P-8 to show its weapons load-out. In doing so the [Chinese] pilot was unable to see the P-8, further increasing the potential for a collision. … The Chinese pilot then flew directly under and alongside the P-8, bringing their wingtips within 20 feet, and then, before he stabilized his fighter, he conducted a roll over the P-8, passing within 45 feet." The incident ended without a collision or the death of aircrew from either side, but it invoked memories of another serious incident that did not end as well—the April 2001 collision between a U.S. Navy EP-3 and a Chinese F-8 in which the Chinese pilot perished.

Although the most recent encounter ended without casualty, the seriousness of the P-8 Incident energized the U.S. government ahead of the November 2014 APEC Summit to get some results in improving the nature of the interactions between American and Chinese military units. After several rounds of negotiations in both Beijing and Washington, in early November 2014, the U.S. Department of Defense and the Chinese Ministry of National Defense signed two Memoranda of Understanding (MOUs) designed to enhance the stability of the military relationship between the two countries. The first, an MOU concerning “Rules of Behavior for Safety of Air and Maritime Encounters” speaks to the American desire to fully integrate China into the rules-based international maritime order. The second, an MOU on “Notification of Major Military Activities” is explicitly a confidence-building mechanism to advance a “new model … of military-to-military relations” and to promote increased Chinese transparency. The Notification MOU seeks to build and institutionalize habits of positive communication in order to reduce the risk of misunderstanding and to avoid miscalculation.

The goal of the “rules of behavior” MOU is to create a common and shared understanding and acceptance of the rules sets that ensure safe operations at sea as a “risk reduction” mechanism to “strengthen regional peace and stability.” By focusing on risk reduction, the MOU implicitly acknowledges the sometimes contentious and competitive nature of U.S.- China relations in the East Asian seas. To manage the risk inherent in military encounters in this type of environment, Americans have long worked to bring China into the rules-based maritime order—it was the consistent focus of the George W. Bush administration after the 2001 EP-3 Incident and this objective has been persistently pursued by the Obama administration. That the Chinese agreed to this MOU is positive evidence of progress toward this goal.

To accomplish the risk-reduction objectives, the MOU reinforces existing “rules of the road” at sea and in the air as provided in agreements to which both China and the United States are already parties. This includes the International Maritime Organization’s Collision Regulations (COLREGS) for safe navigation at sea, the Chicago Convention on rules for safety of navigation in the air and the recently-agreed-upon Code for Unplanned Encounters at Sea (CUES). Since no new rule sets are created by this MOU, no change in American naval and military operations or procedures is required on the bridge of any U.S. Navy ship or in the cockpit of any U.S. military aircraft. American naval and military units already operate in accordance with the rules for safety and this MOU reinforces the importance for professional behavior by the forces of the PLA as well. American military commanders will now be looking for PLA ships and aircraft to consistently operate safely in the vicinity of American units—known in legal terms as the exercise of due regard for the rights and freedoms of others—as is required by existing international rules and laws.

Reflecting the universality of the “due regard” requirement for conducting operations, the “rules of the road” MOU is geographically neutral—it applies everywhere in and above the ocean. Indeed, the most frequent contacts between U.S. and Chinese units are actually in the Arabian Gulf, not in East Asia. But universality also means it applies in all maritime zones. Accordingly, whether U.S. and Chinese vessels meet in a territorial sea, an exclusive economic zone (EEZ) or on the high seas, this MOU increases the likelihood that the vessels or aircraft will interact safely, even when the two sides may not have the same policy about the underlying international law that applies.

That the United States and China need this MOU highlights the fact that the two countries still have different policies concerning the right to undertake military activities in a foreign EEZ, although that policy gap may be closing. China’s policy, which is contrary to international law, is based on its domestic laws, which assert that foreign intelligence-gathering operations or military exercises in and above China’s EEZ are unlawful without Chinese consent. American military units performing such operations have been the frequent targets of aggressive Chinese maneuvering—resulting in the USNS Impeccable Incident in 2009 and the USS Cowpens and a U.S. Navy P-8 incident in 2014. Ironically, similar PLA naval operations in the American EEZ around Hawaii and Guam in 2013 and 2014 provided some early evidence that China’s stance on such operations may be changing. The Chinese operations were met with very safe and professional American responses, demonstrating that national interests can be expressed without aggressive behavior. If this MOU reduces or even eliminates dangerous Chinese behaviors, it will prove to be a major milestone in U.S.-PRC military relations.

One additional benefit of the “rules” MOU is worth highlighting—it may also benefit China’s beleaguered neighbors. China’s public acknowledgement of international standards of behavior should allow other countries to observe them and to hold China accountable for observing them in their mutual interactions. Accordingly, the “rules of the road” MOU sets a clear international standard, not just a U.S.-China standard.

Despite the positive developments brought about by this MOU, some questions remain. For instance, China routinely declares “exercise areas” or “inner defense areas” in its EEZ and purports to entirely close the areas to international navigation during the period of the exercises. When done in its EEZ, this practice is contrary to international law, which allows states to announce “warning areas” during potentially dangerous exercises, but gives no right to enforce closure of such areas to international navigation. Will the Chinese change their exercise claims and, like other countries, accept that during such exercises, the participating units have the burden to give due regard to other ships practicing their right to navigation?

A second issue is apparent from the structure of the MOU itself. Apparently, negotiating time before the APEC Summit ran short before an annex on aerial navigation could be completed. The MOU commits China and the United States to complete an air annex in 2015, but will this happen? The safety of aerial contacts is perhaps the single most important issue in U.S.-China military interactions, since the margin for error is slight and the consequences of unsafe interactions can be so severe. Indeed, Chinese pilot Wang Wei died in the 2001 mid-air collision with a U.S. Navy EP-3. With American surveillance and reconnaissance flights continuing in the airspace above China’s EEZ in the East and South China Seas, the dangers of unsafe aerial contacts remain clear and present.

Finally, the U.S. and Chinese navies have a long history of engagement through the MMCA process. The MOU reinforces the centrality of the MMCA process by providing a feedback mechanism to discuss allegations of any nonconforming behavior. But there is no enforcement mechanism built into either the MOU or the MMCA process. Will an offending individual be held accountable? Will the results of disciplinary processes be shared with the aggrieved side to complete the cycle of accountability? These are just some of the questions that will need to be clarified over time. However, to the extent that the “rules” MOU reinforces a rules-based relationship between the United States and China at sea, it is a major positive development. The Chinese movement in the direction of full acceptance of international rules and laws can only enhance the safety of military encounters.

The second MOU agrees to high-level notification of each side’s “major military activities.” It reflects the increasing sense of strategic instability in East Asia, as China’s military expands. The MOU advances and addresses the existing imbalance in the military-to-military relationship in which American notifications and invitations substantially exceed those of their Chinese counterparts. While the “rules of the road” MOU is focused on avoiding crises by managing the behavior of tactical forces, the “notification” MOU places its burdens on senior military and civilian leaders to manage strategic risk through increased transparency. Thus, alongside the “rules” MOU, it should effectively contribute to increased regional stability in East Asia.