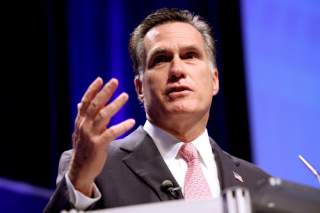 Washington is trying to unravel the man of mystery that is Mitt Romney.

How can someone about to embark upon his third consecutive presidential candidacy, the 2012 Republican nominee, be so inscrutable to the political press? The idea of Romney 2016 wasn't taken seriously by many people not likely to wind up on the campaign payroll (for good reason, I argued in July).

The scenario where a Romney run made the most sense was if Chris Christie's stock continued to fall and Jeb Bush didn't run. At that point, establishment donors would be desperate to avoid a Tea Party nominee. Once Paul Ryan became chairman of the House Ways and Means Committee, he was never likely to get into the race.

But Romney revved up his engines at precisely the moment Bush took his first steps toward being a candidate. And the worst thing that has happened to Christie's chances since Bridgegate, unless you root against the Dallas Cowboys, is Romney's candidacy itself.

Romney wants to run to the right of Bush and Christie in the primaries, despite having a more moderate record as governor of Massachusetts. Bush was considered a fairly conservative governor in Florida and Christie got elected in New Jersey as a pro-life candidate.

In the general election, Romney wants to run as a man vindicated by events since President Obama was reelected. (The extent of that vindication, especially on foreign policy, is certainly open to debate.) But Obama won't be running again in 2016, so how strong will the sense of buyer's remorse really be?

That assumes Romney, who struggled against a woefully underfunded Rick Santorum, can defeat a much tougher primary field nearly a decade after the last time he held elected office and fourteen years removed from his last successful general election campaign.

Plus boredom and personal grudges appear to be part of Romney's motivation for running, neither of which makes for the soundest political calculation. What is wrong with this picture?

But Romney seems to be serious about running—he is at the very least serious about preventing Jeb from consolidating donor support, or he would not be taking these steps now—so let's, for the sake of argument, take him seriously.

If—and this is a big if—the money primary is essentially a wash, Romney can probably use his own fortune to break the tie. He was strong in all the early states but South Carolina in 2012, though you'd have to assume Florida would be a stretch if Bush stays in the race. Maybe he can maintain that strength, or enough of it to win in a splintered field.

Rudy Giuliani sat atop the national polls for a year, but by the time Florida—the first state he wanted to seriously contest—rolled around, the race had passed by him. Maybe Romney could box out Bush and Christie long enough for momentum to carry him, though they would presumably try to do better in the early states than Giuliani did.

Once nominated, Romney could run a fall campaign built on the following message: You may not like me, but I am a fixer of institutions with financial problems—Bain, the Olympics, Massachusetts—and can fix the U.S. government. A noncrazy Ross Perot who will get under the hood and get it done, but with some actual experience in government.

The economy was better when Bill Clinton left office, but the Clinton fatigue was still real enough that Al Gore wound up on the wrong end of the hanging chad. Maybe a similar set of circumstances at the end of Obama's second term would let Romney sneak into the White House.

I don't believe that anything I just sketched out is terribly likely, and don't know if Romney does, either. Romney's candidacy frankly makes the most sense if you believe he is more interested in preventing Bush or Christie's nomination than securing his own.

Nevertheless, by flirting so openly with a presidential run, Romney, Bush and Christie all appear to be betting against each other. As MSNBC's Chuck Todd pointed out, all three of them are also to some extent betting against Hillary Clinton.

The odds are that one of the Big Three bows out before the first ballots are cast. A looming test is how successful Bush is in his plans to raise an intimidating $100 million in three months. Top-tier candidates usually don't persevere once a realistic path to the nomination is gone.

But if the establishment triumvirate does somehow defy the odds, it could give conservatives their best shot at nominating one of their own since Ronald Reagan.