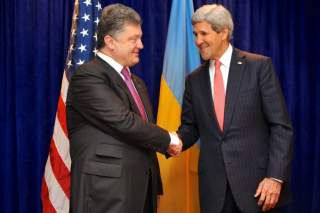 Ukrainian president Petro Poroshenko addresses a joint session of Congress today, an event that House Speaker John Boehner described as “another signal of our steadfast commitment to the aspirations of his people”. Given the huge challenges Ukraine faces, it is understandable that Congress and the Obama administration want to make a big show of their support for its president. Washington would be wise to remember the pitfalls of giving unconditional backing to foreign leaders such as Poroshenko. This would not be the first time that a post-Soviet president has entranced American politicians with promises of reform and democracy, only to prove a disappointment. Our experiences with the likes of Russia’s Boris Yeltsin, Georgia’s Eduard Shevardnadze and Mikheil Saakashvili and Ukraine’s own Viktor Yushchenko (who also addressed a joint session of Congress in 2005) should give us pause. If the United States really wants to support the aspirations of the Ukrainian people, it should develop a realistic and effective strategy for supporting their country and not simply give carte blanche to problematic leaders like Poroshenko.

Poroshenko’s past is well known, and members of Congress should keep it in mind as he speaks. Like much of the elite in the former Soviet Union, he became wealthy by acquiring state assets and then using that wealth to launch a political career. In the early 1990s, Poroshenko created a company, UkrPromInvest, that bought up confectionary and then later agricultural and automotive producers. In 1998, he was elected to parliament, and in 2001, he helped create the Party of Regions, which backed former president Leonid Kuchma and his ally Viktor Yanukovych (who himself became president in 2010, but was driven from power by the 2014 Euromaidan revolution). In 2002, Poroshenko quickly broke with the Party of Regions and teamed up with Viktor Yushchenko, whose presidential campaign he funded. Yushchenko named Poroshenko head of Ukraine’s Security Council, but dismissed him less than a year later after Yushchenko’s former chief of staff accused Poroshenko of unspecified acts of corruption. The prosecutors office investigated the matter, but no charges were filed. Nevertheless, the incident tarnished Poroshenko’s reputation, prompting some U.S. officials to describe him at the time as a "disgraced oligarch" and “tainted by credible corruption allegations.” Poroshenko, though, would later return to government, serving as foreign minister under Yushchenko and then Economic and Trade Minister under Yanukovych.

Poroshenko actively supported the popular protests in Kiev that started after Yanukovych failed to sign the EU association agreement in 2013. He addressed the crowds and heavily financed the Maidan movement. However, unlike other protest leaders, he did not engage in any negotiations with Yanukovych, a move that greatly boosted his popularity. At the same time, however, he has faced allegations that he has continued to cooperate with Dmytro Firtash, a billionaire who backed Yanukovych and is currently in Austria fighting extradition to the United States on “international corruption conspiracy” charges. According to some sources, Poroshenko and Kiev’s mayor, Vitali Klitschko, visited Firtash in Vienna earlier this year.

President Poroshenko has made cleaning up the state bureaucracy and fighting corruption a priority. However, he seems truly troubled by his past brushes with the darker sides of Ukrainian business and politics. Asked by the BBC if he had ever paid a bribe, he responded, "I wish to say no. But I believe in God and it's not a good thing to be a liar…I am in a position not to give bribes to the bureaucrats now. But in the beginning unfortunately it happened." Given his apparent commitment to improving Ukraine’s governance, perhaps his past is not so important. After all, it was probably impossible to be involved in business or politics in the 1990s in Ukraine and not get caught up in corrupt activities. Poroshenko, in fact, seems to be cleaner than many other would-be leaders. Beyond this, he has said he is placing his assets in a blind trust so as to remove any appearances of impropriety.

And we could probably accept that Poroshenko is turning over a new leaf and that he can fight for better, cleaner government, if he in fact were relinquishing control of all his assets. In fact, though, he has decided to keep control of one very important holding: Ukraine’s Channel 5 television network. The network has long served as a public-relations tool for Poroshenko and those whom he chooses to support. Asked why he wasn’t selling the channel, Poroshenko responded, “This is my asset, and I can do whatever I want with it.” Politicians using the media to promote themselves is, of course, not unique to Ukraine. But Poroshenko’s unwillingness to part with this powerful tool raises questions about his willingness to clean up Ukraine’s political process.

When applause for Poroshenko’s speech subsides and the photo ops end, American politicians should think long and hard about how to devise an approach toward Ukraine that fits U.S. national interest and that can actually benefit Ukraine. The United States has too often allowed unconditional support for a favored leader to masquerade as policy, and in the former Soviet Union this approach has proved disastrous. Poroshenko seems well intentioned, but his past, along with Ukraine’s past, should make us very cautious. Poroshenko should leave Washington understanding clearly what actions the United States will and will not support and understanding clearly what American objectives are for Ukraine. In the absence of such clarity, Ukraine could well be headed for the sort of disappointment that came after the last time one of its presidents spoke before Congress.

Raymond Sontag is an Adjunct Senior Fellow at the Center for the National Interest. He writes on Russian and Eurasian affairs and US foreign policy and has worked as a consultant for the Department of Defense and Department of State. Dr. Sontag previously served as a program officer at the National Democratic Institute for International Affairs, working with political parties in Russia, Azerbaijan and Georgia. He received his doctorate from Oxford University where he also taught courses on post-Soviet Russian politics.