Mr. X on America's Role in the Middle East 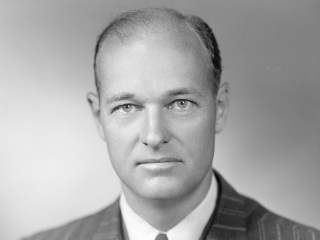 Reflecting on the faith that generations of U.S. policymakers placed in George Kennan’s explication of containment, former Defense Secretary Robert Gates recently expressed his concern that the United States lacks a comparable construct to address the Middle East’s unraveling:

“If you accept the premise that we face a generation-long period of turbulence and violence in the Middle East, the lack of an overarching strategy for how you react to a region in flames is a problem. Are there fires we should just let burn out? Who are our friends? Who should we support?”

Kennan was not a scholar of the Middle East. While the State Department had reassigned him to its Jerusalem consulate in June 1937, and he had even begun learning Hebrew, the Roosevelt administration ultimately had him stay in Washington on account of his insights into the Soviet Union—insights that understandably occupy the defining role in his diplomatic legacy. Still, his perspectives—especially those he articulated in the later years of his life—bear directly on the convulsions now gripping the region. In a March 1995 essay for Foreign Affairs, he exhorted the United States to revisit the wisdom of its sixth president, John Quincy Adams. In a July 4, 1821, address he delivered while secretary of state, Adams warned that if America were to assume

“banners [other] than her own, were they even the banners of foreign independence, she would involve herself beyond the power of extrication, in all the wars of interest and intrigue, of individual avarice, envy and ambition, which assumed the colors and usurped the standards of freedom.”

Kennan also observed how difficult it is for a country, even one of surpassing influence, to intervene in another’s “domestic affairs or in its conflicts with its neighbors” “without creating new and unwelcome embarrassments and burdens” for itself.

The upheavals that began in the Middle East five years ago have reshuffled longstanding alliances and hostilities, created a staggering array of new actors, and left vast stretches of the region in either intermediate or total collapse—outcomes that have collectively shattered the prevailing order there. In February 1990, Václav Havel told a joint session of Congress that the Soviet Union’s disintegration was occurring so quickly that observers had had “literally no time even to be astonished.” One could say the same about today’s Middle East, where Syria is being rent by a horrific civil war, the Islamic State is on a rampage, and Libya and Yemen are devolving ever further into chaos. Given how challenging it is simply to process such developments, speculations about the region’s evolution should be regarded with suspicion, as should impassioned calls for the United States to display greater “strength,” “decisiveness” and “leadership” that are unaccompanied by clarity of prescription and consideration of consequence.

The growing ruin of the Middle East and the increasing speed with which social media render judgments on events, combined with America’s commendable can-do mentality, are imposing overwhelming pressure on U.S. policymakers to do something, even if that something is unclear. But prudent foreign policy cannot emerge if the agitation to intervene trumps the imperative of defining the scope and duration of the intervention. In the case of the Middle East, as Secretary Gates explains, the United States is incapable of answering fundamental questions.

Imagine a frantic individual who rushes into a hospital, begging to be seen. No responsible doctor would administer treatment without first diagnosing the patient and assessing what can reasonably be done to improve the patient’s condition. Nor should the United States rush to “treat” the Middle East when it has precious little understanding of the region’s emerging dynamics and even less appreciation for the unintended consequences its actions could have there.

In a Winter 1985 essay, also for Foreign Affairs, Kennan noted that “[i]n a less than perfect world, where the ideal so obviously lies beyond human reach, it is natural that the avoidance of the worst should often be a more practical undertaking than the achievement of the best.” One cannot heed this advice, however, unless one brings “one’s commitments and undertakings into a reasonable relationship with one’s real possibilities for acting upon the international environment.”

Caution need not be, as it is often tarnished, a euphemism for inaction. There is much the United States can and should do with regards to the Middle East: absorb a far greater number of refugees from Syria (it has admitted a few thousand, while Canada has resettled more than ten thousand); work with regional partners to limit the Islamic State’s advances and minimize disruptions to energy flows; and continue implementing the landmark deal it signed with Iran last year. But these disparate measures do not contradict a posture of restraint, one that internalizes the lessons of America’s military interventions in Iraq and Afghanistan; appreciates the limits to U.S. influence in a region whose present turbulence is borne more of organic protests than external interventions; and recognizes that the Asia-Pacific region’s evolution will be far more decisive in shaping its role in the world than that of the Middle East.

Kennan is properly recognized as one of the twentieth century’s foremost Sovietologists. But as it contemplates the myriad changes sweeping through the Middle East, the United States would do well to recall his cautionary counsel—evergreen, but of heightened importance in times of such great uncertainty.

Ali Wyne is a nonresident fellow at the Atlantic Council and a fellow with the Truman National Security Project.