Much Ado About Volodymyr Zelensky 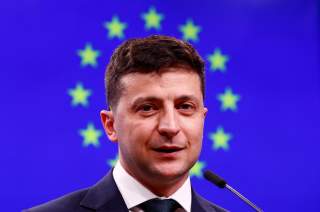 Ukrainian president Volodymyr Zelensky got his wish. Ever since the comedian-turned-presidential-candidate won the presidency, he has insisted that he could not govern nor could he move on his agenda without obtaining a fresh mandate in the Ukrainian parliament. Having successfully dissolved the Verkhovna Rada ahead of schedule, he and his team made the case that Ukraine needed a legislature fresh for the job. Ukrainian voters responded, giving his newly created and quickly assembled “Servant of the People” party the absolute majority in the new assembly. He now takes full responsibility for the course of the country.

Like his predecessor Petro Poroshenko, who only lasted one term in office, Zelensky has promised the Ukrainian people that he can keep Ukraine's Euro-Atlantic integration on course, while finding a lasting settlement to the conflict with Russia, all while tackling the corruption that has hobbled the Ukrainian economy for the past two decades. Like the "Obama-Trump" voters in the United States, Zelensky, both as a presidential candidate and in terms of his political party, received most of the votes of those who rallied to Poroshenko in 2014.  The challenge now is whether Zelensky can succeed where Poroshenko did not.

That will depend on several factors.

The first is whether a hastily formed political movement that is quite clear on what it opposed can transform itself into a cohesive governing party. Will the Servant of the People deputies be prepared to hand a blank check to Zelensky in terms of ministerial appointments and rubber stamping his preferred pieces of legislation? Beyond that, how will the new deputies—many of whom are political novices who were selected as candidates precisely because of their lack of connection to the pre-existing state of affairs—adjust to the realities of having to govern?

For Zelensky, will he prefer to sustain democratic norms or use his victory to redefine the power of the presidency and to give him more authority, particularly to rule by executive action? Here, Ukraine could follow the trajectory observed in Georgia after the Rose Revolution of 2004--with an effort to shift to a more powerful presidency in order to try and push through reform.

The second is whether, in the wake of Zelensky's victory, the United States and Europe decide to accelerate the pace of their support for Ukraine by making more aid available as well as contemplate debt forgiveness or postponement in order to give the new administration more breathing space. However, Zelensky takes office at a time when most of Europe's centrist parties are on the decline, and where there is less enthusiasm for another round of Ukrainian bailouts.

At the same time, Russia has had five years to move on its own plans for bypassing Ukraine. At the time of the Maidan uprisings, new energy pipelines were only drafts on paper; as of writing today, however, Nordstream 2 (linking Russia directly to Germany) is more than 60 percent complete and the TurkStream line is 90 percent finished. Russia has had the opportunity to delink itself from Ukraine while finding ways to reorient its previous dependence on Ukrainian industry for defense articles through a mix of import substitution but also by continuing to recruit Ukrainians with the necessary experience to relocate to Russia.

The strategy adopted by the Poroshenko administration was to use unease in Washington and in some European capitals to Russia's efforts to bypass Ukraine to generate actionable sanctions that would prevent Russia from finishing its bypass lines and compel continued energy transit from Russia to Europe via Ukraine. Whether the Zelensky government will have more luck than its predecessor in stopping the Russian bypass strategy remains to be seen. At the same time, his vague assurances that he can end the conflict with Russia are interpreted differently in different parts of the country.

Does Zelensky have more freedom of action to pursue compromise approaches to de-escalating the conflict with Russia? Poroshenko's team did not believe he had the domestic political credibility to pursue a prisoner exchange with Russia. Now it appears that the first exchange since 2017 may take place, and would encompass both combatants but also people deemed to be held on political charges. Does this portend a more flexible stance by the new Zelensky team on talking with Russia? Or will it create tensions within his political movement.

Finally, it is unclear how the struggle with corruption will bear out. While much is made of the sheer number of new arrivals to the Verkhovna Rada replacing career politicians, it bears remembering that in the aftermath of the 2014 Maidan uprising there was a similar influx of activists and  fresh faces—but over time, a mix of succumbing to corrupt incentives or feeling the futility of politics led to many of the young revolutionary activists to be co-opted by the system. Will Zelensky take control of the system, or will it find ways to corrupt his people? And to combat corruption, could Zelensky, like Mikheil Saakashvili in Georgia before him, find a new appreciation for using authoritarian ways to achieve these ends?