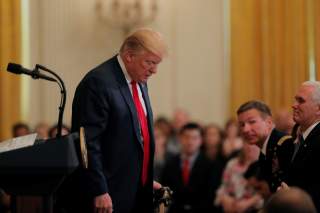 The formal release of Mueller’s report was similarly sparing to the White House. Hundreds of pages confirmed what the American public and the world knew prior to Thursday: the Russian government interfered in the 2016 election, and as Attorney General Barr said, “Russian operatives… did not have the cooperation of President Trump or the Trump campaign.”

Also largely extinguished Thursday was a cottage industry that speculated that Barr—a decades-long friend of Mueller’s—was in some way obfuscating from the meat of Mueller’s findings in his letter to Congress in late March. Barr, as promised, released a redacted version of the full report in under a month.

While Mueller’s team stuck a fork into the notion that Trump colluded with Moscow, it effectively kicked the question of whether Trump obstructed justice to Congress—concerning to some conservatives. “The evidence we obtained about the President’s actions and intent presents difficult issues that prevent us from conclusively determining that no criminal conduct occurred,” the report reads.

But putting the ball in Congress’ court could test Nancy Pelosi’s leadership in the House. She has previously poured cold water on the idea. Thursday was much the same: the House majority leader and Pelosi’s longtime ally, Steny Hoyer, again dismissed such talk, telling CNN: “Very frankly, there is an election in 18 months and the American people will make a judgement.” Indeed they will.

The Democrats want to focus on healthcare and retaking the Midwest. As Indiana presidential hopeful Pete Buttigieg emphasized Thursday, the president may not be seditious, but selfish: “The Mueller report is a disturbing if not completely surprising collection of evidence that shows a president putting his own interests ahead of the country’s. Today again demonstrates why we need to change the channel in 2020.” American Conservative editor James Antle noted today that his sunny message could prove a potent one if enough of the country is tired of Trump’s constant tweets and acidulous approach.

It may be a tough go, however, and more hardline members of the House caucus—and left-leaning cable news—may push for impeachment, nonetheless. It will be up to seasoned operators like Pelosi to clamp the lid down on renewing a fight that the president himself—concerned that he’s under-delivered on central campaign planks—increasingly seems to relish.