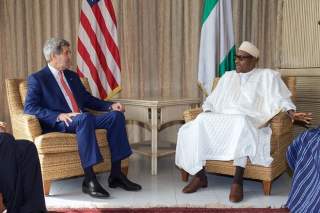 Though he's not the candidate with the name "Goodluck," Muhammadu Buhari, the challenger in Nigeria's now-delayed presidential election, must be feeling lucky.

As the race shapes up to be the closest election since the return of “civilian” government in 1999, it also promises to be the most important test of Nigeria's nascent and imperfect democracy. Unlike the previous four elections, there's a real chance that the dominant People's Democratic Party (PDP) could fall from power. If it does, Nigeria's incumbent president Goodluck Jonathan will be judged by history on the basis of how he left office as much as what he did in power.

Jonathan today is as embattled as African heads of state typically get. Struggling in his fight to halt Boko Haram's rise in northeastern Nigeria as a growing international threat, and reeling from a collapse in global oil prices that's left his government staggering to slash a national budget already inadequate to address the dual challenges of Nigerian security and development, the country's nominally independent national election commission postponed its general election for six weeks—from February 14 to March 28—ostensibly to register more voters in areas affected by the Boko Haram insurgency and to give the Nigerian military a chance for one last offensive against the group.

The six-week delay initially felt like a suspicious opportunity for Jonathan to rally his chiefly southern, chiefly Christian supporters to win reelection. But it is already turning out quite differently. Jonathan is increasingly sidelined by economic and security problems, and last week brought a long-time-coming defection from his former patron, former president Olusegun Obasanjo, who tore up his PDP membership card last week, the latest chapter in an increasingly vocal turn away from Jonathan and toward Buhari.

Far from rallying Jonathan, the current six-week extension period is something like a triumph for Buhari, who's so comfortable about the state of the race that he spent over a week in London on a charm offensive in the United Kingdom, which has retained close postcolonial ties with Nigeria. Buhari quietly met with former prime minister Tony Blair, and he spoke at Chatham House, a leading London think tank, on February 26. Opponents, most notably Ekiti governor Ayodelse Fayose, claim that Buhari's trip is related to ill health, and Buhari himself said upon his return to Nigeria that he used the trip in part as a rest from the campaign trail, but there's no indication that the seventy-two-year-old candidate was seeking medical treatment abroad.

Notwithstanding his overseas trip, Buhari is no unfamiliar face to Western policy makers. Buhari is waging a compelling and credible campaign on two joint rationales—first, that he can reduce the extent of Nigeria's massive corruption and second, that he is better suited for thwarting Boko Haram than Jonathan.

But Buhari would arrive at the presidency with considerable baggage.

Three decades ago, Buhari led a coup against the civilian government of former president Shehu Shagari. Though the military coup was widely popular and Shagari despised for perpetrating corruption on a previously unseen scale, Buhari has a decidedly mixed record during his own tenure as Nigeria's military head of state between December 1983 and August 1985. Among the most egregious excesses involved the enactment of “Decree 4,” a repressive measure that curtailed press freedom by punishing the publication of anything that brought Nigeria's government into “ridicule or disrepute” with a two-year prison sentence. Several prominent journalists at the time were tried before military tribunals and imprisoned.

Nevertheless, Buhari led the most committed campaign in Nigerian history to eliminate graft and corruption, and his ambitious “war against indiscipline” sought to instill a sense of professionalism within the civil service and civic pride among the Nigerian population. It was Buhari's intolerance for corruption that probably brought his government to an overhasty conclusion. Terrified elites, in both Nigeria's north and south, breathed a sigh of relief when another military leader, Ibrahim Babangida, came to power in yet another coup. Babangida, who remained a powerful Nigerian political boss in the north after his own fall from power, has even endorsed Buhari in 2015, thirty years after deposing him.

Western fears run high that Buhari's victory would restore to office a figure who first rose to power by deposing Nigeria's first elected leader and who, while in office, evinced little regard for human rights. But a Buhari victory could, under the right circumstances, actually strengthen Nigerian democracy. It demonstrates quite a bit of confidence on Buhari's part that he is spending so much time wooing Western officials before any votes have even been cast. It also underlines just how cozy relations between the Jonathan government and Western governments are, especially during U.S. president Barack Obama's administration.

But the knee-jerk distaste for Buhari might be too pessimistic.

As John Campbell, George W. Bush's former ambassador to Nigeria, writes in his memoirs, Nigeria: Dancing on the Brink, "Buhari's reputation at home was that he, almost alone among the rulers of Nigeria, tried to address the problems of the country. The popular view was, and largely remains, that Buhari's anti-corruption campaign was waged against the oga networks on behalf of the 'everyman' . . . at present, Buhari is probably the only national political figure with genuine popularity, at least in the North. . . . for those who have benefited from Nigeria's current political economy, Buhari is high risk."

Since the return of professedly civilian rule under Obasanjo in 1999, Buhari has tried (and failed) three times to win the presidency. He lost to Obasanjo in 2003 by the lopsided margin of 61.9 percent to 32.2 percent. In 2007, he lost to Obasanjo's hand-picked successor, northerner Umaru Yar'Adua, by an even more lopsided official tally. Jonathan, an ethnic Ijaw who comes from the oil-rich Niger Delta, assumed the presidency upon Yar'Adua's death in 2010, and he, too, defeated Buhari when he ran for election in his own right in 2011.

But those margins coincide with reports of widespread voter fraud, and so they likely understate the level of Buhari's true support. In 2011, many members of Nigeria's northern Muslim political establishment cautiously backed Jonathan, notwithstanding Jonathan's decision to reverse a pledge to stand down in 2011, which would have restored the balance of alternating the Nigerian presidency between the Muslim north and the Christian south. In 2015, virtually the entire northern establishment backs Buhari. Nigeria's opposition movement is stronger than at any time since 1999, with several political parties and a handful of PDP stalwarts defecting to form the All Progressives Congress (APC), united chiefly in their desire to wrest power back from Jonathan.

For sixteen years, the PDP's rule has made Nigeria an effectively one-party state. Buhari's victory would change that, and the APC's strength, especially in the north, could deliver it a firm majority in Nigeria's National Assembly. But the country has yet to experience a peaceful transfer of power from one democratically elected president to an opposition figure, and in 2010, there were fears that the uncertainty surrounding Yar'Adua's incapacitation and death could invite the kind of military intervention all too familiar prior to 1999. National elections are marred by commingling of campaign and government coffers, with rife examples of vote-buying and outright vote-stealing. In the best-case scenario, Jonathan's reelection would be tainted by suspicion of an unfair and unfree vote. In a worst-case scenario, Nigeria's military might even intervene to keep Jonathan in power. Ironically, despite Buhari's military past, top army officials are sympathetic to Jonathan and PDP rule, under which they are much likelier to maintain their economic and political interests.

The election is of paramount importance to global interests in sub-Saharan Africa. As the most populous country in sub-Saharan Africa, and as of last year, its largest economy, Nigeria represents a particularly strategic U.S. ally. Even as the country cycled from military to civilian leaders, and between less corrupt and more corrupt governments, Nigeria consistently partnered with the United States. That makes it an important anchor for regional stability in west Africa, even when Nigeria is itself in danger of rupturing chaotically. Nigeria today faces many of the same problems, in miniature, as greater sub-Saharan Africa, making it a template as well as a touchstone for how twenty-first-century Africa might either progress or stagnate in the decades ahead.

Its oil production brings with it the same “resources-curse” issues of overvalued currency, corruption and the crowding-out of other export industries, such as Angola, Sudan (and perhaps in the future) Ghana and other countries. A renewed effort by a Buhari administration to, at a minimum, reduce corruption would divert more oil funds to the Nigerian treasury to boost education, welfare, agriculture and other economic sectors.

Its split between a northern Muslim and a southern Christian population means that Nigeria faces the same ethno-religious tensions as many other Sahelian countries, including Mali and Ethiopia, where a Muslim majority may emerge over the course of the next decade. Boko Haram's insurgency in northeastern Borno state means that, like Kenya and Somalia, a cash-strapped Nigeria is scrambling to allay the flames of extremist violence. Though Boko Haram's leadership despises Buhari nearly as much as Jonathan, Buhari has more credibility with Nigeria's Muslims. He supported the introduction of shari'a law (in name more than in practice) to twelve northern states in the early 2000s, and he would take power with a strong chance to soothe long-running north-south rifts.