Munich Conference Exposes the Decline of the West 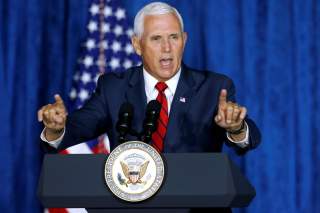 Who knew that the 2020 presidential campaign would really kickoff at the annual Munich Security Conference? Former Vice-President Joe Biden announced, “we will be back. We will be back. Don’t have any doubt about that.” He was referring to what he sees as America’s natural leading role in the international stage. But it was hard not to read in it another message, which is that he himself will be back in Washington. This time as the Democratic candidate who ousted Trump whose policies Biden dismissed as an “embarrassment.” Biden dinged Trump for everything from its climate change policies, or lack of them, to its trade wars. The message was clear: after a four-year interregnum, the ancien regime will be restored.

Vice President Mike Pence, by contrast, suggested that everything is hunky-dory. Pence is a member of the hawkish wing of the GOP that is straight out of the Reaganite 1980s. Fresh off his flagrant failure in Warsaw to convince Europeans to join the anti-Iran crusade, he tried to paint Trump as strengthening the NATO alliance, a goal that Trump himself displays zero interest in pursuing. Nuking the INF Treaty, as Trump has done, scarcely bolsters European security; it erodes it.

Trump is a believer in old fashion realpolitik, not in permanent alliances. Pence, though, sought to reinvent Trump: Under Trump’s leadership, he said, “America is leading the free world once again.” Trump, in other words, is a new Reagan.

Whether the Europeans believed any of this folderol from both Biden and Pence is doubtful. Trump has accelerated America’s drift away from Europe, which took place under President Barack Obama. Obama took no particular interest in Europe, other than regretting that he led a NATO coalition into Libya in March 2012. He later called it the “worst mistake” of his presidency. But unlike Trump, Obama never heaped public contempt on Europe as does Trump for whom the failure to pay adequately for their defenses served as a fine pretext to condemn the entire project.

Of course, the Europeans are doing a fine job of sabotaging themselves. German Chancellor Angela Merkel delivered an impassioned speech defending the West, but latest reports indicate that the Germans can barely field a functioning army. If a hard Brexit occurs, Europe will be further weakened politically and economically. Germany could start looking East rather than West.

In this regard, tensions are rising between Washington and Berlin over the controversial gas pipeline Nordstream 2, which Merkel is stoutly defending. France and other countries worry that the project will strengthen German-Russian ties at the expense of Ukraine. Merkel is an advocate of maintaining political ties to Moscow. At Munich, she said it would be foolish not to consider the geopolitical repercussions of halting the Nordstream project: “Consciously shutting Russia out politically, I think that’s also wrong. Europe can’t have a geopolitical interest in halting all relations to Russia.”

No matter what Biden or Pence may say, Europe knows that it is increasingly on its own. Munich did not create any new transatlantic policies or clashes. It simply exposed them.