Name and Shame Peacekeepers That Won't Act to Keep Peace 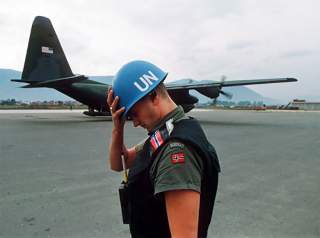 The latest outbreak of political violence in South Sudan has left an estimated forty-two thousand people homeless and claimed the lives of two UN peacekeepers. The violence between forces loyal to President Salva Kiir and First Vice President Riek Machar is a reminder of the important role UN peacekeepers play in protecting civilians in conflict—and how terrible the harm can be when peacekeepers don't live up to their responsibilities.

Witnesses allege that South Sudanese soldiers have raped dozens of women and girls just outside a UN base since the recent fighting, while peacekeepers failed to intervene. These allegations recall a major incident of peacekeeper inaction earlier this year. On February 17–18, armed assailants attacked a UN Protection of Civilians site in Malakal, South Sudan, killing more than thirty civilians and burning large swaths of the camp to the ground. Investigations into the event, including an internal UN board of inquiry, confirmed that UN peacekeepers were slow to respond and failed to live up to their responsibilities to protect the civilians living in the camp.

Failures like this occur all too often in nations that host UN peacekeeping operations, usually with no consequences for the peacekeepers involved. This trend, however, may be about to change. The head of UN peacekeeping operations, Hervé Ladsous, confirmed recently that units or individuals will be sent home in response to the failure to intervene in the Malakal attack. “Certainly there will be repatriation,” Ladsous told the media.

The UN deploys peacekeeping missions to support peace agreements and protect civilians in response to some of the most violent conflicts. These missions are critical to global security, preventing fragile states from collapsing and saving countless lives. Yet despite high expectations, peacekeeping troops too often fail to respond to attacks against civilians.

The UN Department of Peacekeeping Operations says that peacekeepers risk repatriation if they do not perform to UN standards, but has so far applied this disciplinary measure extremely rarely, even in clear-cut instances of failure to protect.

In 2010, UN peacekeepers in the Democratic Republic of Congo failed to intervene as armed groups ravaged a cluster of villages less than twenty miles from their base. No troops were sent home for this failure to respond. In 2013, UN peacekeepers in Darfur surrendered a bus of displaced persons to rebel forces without a fight. Again, not one peacekeeper was repatriated or held responsible.

By contrast, there are many examples of peacekeepers being sent home for other failures. Over a thousand peacekeepers have been dismissed due to sexual exploitation and abuse or affiliation with such abuses. Thirty peacekeepers from three peacekeeping missions were repatriated due to excessive use of force last year alone. Personnel have been sent home for involvement with drugs, violating curfews, ill preparedness on arrival and allegations of human-rights abuses in their home countries.

The UN has been reluctant to repatriate troops for failing to protect in part because of its delicate relationship with key troop-contributing countries (TCCs). The UN solicits voluntary troop contributions from member states to serve in peacekeeping missions. Offending a major TCC by dismissing its soldiers from one mission could make that country reluctant to provide troops for future missions, or even cause it to pull its troops from all UN missions.

For example, when Indian peacekeepers fled the advance of RUF rebels on Sierra Leone’s capital in 2000, then-Secretary-General Kofi Annan attempted to remove the Indian Force Commander from his post. In response, the Indian government threatened to withdraw all of its forces from all UN peacekeeping operations. Current Secretary-General Ban Ki-moon met the same threat when he attempted to dismiss an Indian contingent commander in the Democratic Republic of Congo after he allowed the rebels to take control of a major city in 2012.

The UN and its member states have taken a number of steps to address this problem. At a summit cochaired by President Obama last September, the UN received commitments from fifty member states to contribute over forty thousand additional peacekeepers when needed, reducing the department’s dependence on specific TCCs. The UN General Assembly has approved premium payments to peacekeeping contingents serving in high-risk areas. The UN also now requires force commanders to regularly assess military units’ performance and notify headquarters immediately when any contingent fails to follow an order.

But ultimately, sending forces home is the only way for the UN to send a strong message that it is unacceptable for peacekeepers to stand by when civilians are in danger at their doorstep. Peacekeeping chief Ladsous’ promise to repatriate the troops who failed to respond effectively during the Malakal attack is an important step in the right direction.

The UN should now go one step further: Name and shame the countries whose troops failed to protect civilians in Malakal. Troops that fail to intervene are often acting on instructions from their home capitals. Punishing the troops on the ground while letting the TCCs remain anonymous may end up protecting the political leadership that is ultimately responsible for the troops’ inaction.

Despite the fragile ceasefire, South Sudan may once again be on the brink of civil war. Peacekeepers could play a critical role in protecting civilians and preventing violence. By publicly denouncing clear-cut cases of peacekeeper inaction, naming the countries involved, and sending the responsible units home, the UN can make it clear that it will not tolerate inaction.

Aditi Gorur is the director of the Protecting Civilians in Conflict program at the nonpartisan Stimson Center based in Washington, DC. Madeline Vellturo is a research associate at the Stimson Center.