Nancy Pelosi and Theresa May are Leading on Borrowed Time 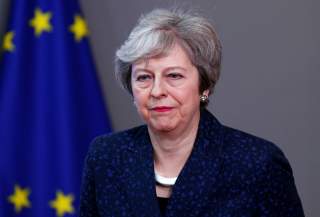 Prime Minister Theresa May and Speaker of the House Nancy Pelosi, two female politicians on either side of the Atlantic, each managed to stave off challenges to their leadership from members of their own parties last month, but only after both made commitments to step down within the next five years. Along with German Chancellor Angela Merkel’s pledge to not seek reelection in 2021, these two promises—the political equivalent of self-imposed expiration dates—mean that almost an entire generation of the West’s most recognizable stateswomen will exit the world stage in just the next few years. Now, with Pelosi having negotiated a temporary end to the partial government shutdown and May attempting again to pass a final Brexit deal, it is worth remembering that both women must contend with fundamental problems at the core of the power they are wielding to lead.

As the Conservative Party’s members of the British Parliament gathered in December to vote on a no-confidence ballot that would have forced Theresa May to step down, the prime minister promised a room full of her own party’s backbenchers that she would resign before the next parliamentary elections in Britain. Even then, 117 of her colleagues voted against her. While it is hard to know whether May’s promise to eventually step aside swayed the forty-odd members whose votes made the difference, one thing is clear: her decision is nearly unprecedented. Her four living predecessors in the premiership, all of whom are men, were either rejected by British voters at the ballot box or left office on their own terms. None of them were forced to set expiration dates on their own time in office to survive challenges from their own parties.

On the day of the no-confidence vote, YouGov polled over 3,000 British adults and asked them whether they thought Theresa May should continue as prime minister, as well as whether they thought someone else could “negotiate a better exit deal with the EU” if May lost the vote. May earned the support of a plurality of the respondents, both among those who had previously voted to leave the EU and among those who had voted to remain. A majority of those polled who identified themselves as Conservatives also supported May, even though the challenge to her leadership was coming from within her own party.

Among the women whom YouGov surveyed, May enjoyed far greater support. While only 29 percent of British women did not support May on the day of the no-confidence vote, 40 percent of men believed that she should not remain as Prime Minister. At the same time, when asked whether they thought another leader could secure a better Brexit deal, 62 percent of British men answered that they did not. While May’s handling of the Brexit negotiations has been seen as the source of her political weakness, the results of Wednesday’s YouGov poll suggest that gender was a more accurate predictor of whether a person supported the prime minister than how they cast their vote in the 2016 referendum.

On the other side of Atlantic, Nancy Pelosi is the first person since Sam Rayburn to hold the speaker’s gavel for two nonconsecutive terms. That place in history has come at a cost. Pelosi secured the support of enough remaining caucus holdouts for her speakership bid in December. This, however, came only after she had pledged to step down as leader of the House Democrats by 2022, and even though the party had made sweeping gains in the November midterm elections. When was the last time that a minority leader in the House was forced to place an expiration date on his or her tenure as speaker before even being elected?

Of course, there is a difference between negotiating the terms of Britain’s exit from the EU with Michel Barnier and navigating the complicated politics of the U.S. federal budget and funding for a border wall with Donald Trump. May and Pelosi have each faced unique challenges associated with their roles as politicians—and they certainly would not agree on many matters of policy—but both encountered curiously similar challenges to their leadership last year.

Democratic erosion assumes many forms. Concerns about the rise of far-right political movements in Europe and the roaring return of populism to the United States have shaped many conversations about the decline of liberal democracy in the West. Meanwhile, Nancy Pelosi and Theresa May have now both weathered challenges to their leadership from within their own parties, rather than at the ballot box. Less than two years ago, the British people chose more Conservatives for seats in Parliament than any other party, even with May at the helm. This November, American voters gave Democrats a considerable majority of seats in the House, even though Pelosi gave no indication that she would step aside should her party retake the chamber.

Undermining female political leaders from behind closed caucus doors represents another form of democratic erosion. Preventing elected women from fulfilling their mandates risks providing other political movements—often authoritarian, often driven by machismo—with more opportunities to undermine liberal democracy in the West. How does the treatment of Nancy Pelosi and Theresa May at the hands of their own members affect the thinking of women in Western democracies who might consider seeking positions in party leadership after running for elected office and winning?

The bargains that Nancy Pelosi and Theresa May have struck with members of their parties should cast the relationship between the health of Western democracies and the political inclusion of women into an even harsher light. Both are leading on borrowed time, having made arrangements with their respective caucuses that male politicians in the same roles may not have even been asked to make. This pattern of behavior towards female politicians cuts across ideological lines and sovereign borders, but can still have deeply erosive effects on struggling democracies.

Chris Estep and Livia Godaert are researchers at the Center for a New American Security (CNAS).