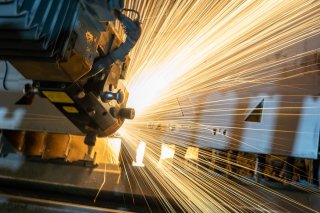 FDR also sought to break up non-financial monopolies and entrenched businesses, as he recognized that a democratic society cannot survive if economic and political power is concentrated in the hands of a commercial elite. The advent of World War II reinforced this view, as a number of American companies had international cartel agreements with Nazi German industry—including GE, DuPont, Alcoa, Dow Chemical, and others. Established monopolies were also broken up thanks to the U.S. government creating and financing competing enterprises. World War II saw the Roosevelt administration create the Defense Plant Corporation (DPC), the Defense Supplies Corporation, the Metals Reserve Corporation, the Rubber Reserve Corporation, and so on. The DPC was particularly important, as it essentially created the U.S. military aircraft and machine tool industries. These various industries were distributed across the country, creating new industrial hubs and bridging the geographic-economic divide.

Finally, the Roosevelt administration invested heavily in infrastructure. The Public Works Administration, created in 1933, resulted in the creation of millions of jobs, as workers built everything from roads, bridges, schools, and parks to massive projects, such as the Hoover Dam, New York’s LaGuardia Airport, and more. In total, according to Nick Taylor’s American-Made: The Enduring Legacy of the WPA, the agency “covered the U.S. with 650,000 miles of road, built 78,000 bridges, erected 125,000 civilian and military buildings, and constructed or improved 800 airports.” These programs put an unemployed nation back to work and built the foundation for future economic growth and productivity. Moreover, these projects developed parts of the nation that had otherwise been neglected in the pre-FDR years. The Tennessee Valley Authority transformed entire states that had previously been impoverished and disease-ridden. Cheap electricity was introduced in regions where companies had considered it unprofitable to expand into. New dams meant that periodic floods ceased to be a recurring problem for many.

FDR and Congress, by reasserting government authority over economic affairs, not only rescued the nation from the greatest economic depression in history but set the stage for what is still considered to this day to be the “Golden Age of Productivity.” The institutions that arose during the period still play an essential role in modern America, and provide a guide for what today’s leaders should aspire to achieve.

WHAT LESSONS, then, can be drawn from these previous crises in American history? And what sorts of reforms are necessary in modern America? Three themes stand out.

First, there is the question of finance and its influence over the rest of the economy. If there is a dominant recurring theme to the previous three great crises, it is that an under- or unregulated financial system is an endless source of troubles. Though finance plays an essential and unique role as the originator of credit for the wider economy, this also means that it can have a disproportionately negative impact if such influence is not deployed carefully. This is particularly the case if the sector grows too big and concentrated, since, in the words of James K. Galbraith, “the singular feature of big finance is that it is predatory, speculative, unstable, and a drain on resources to no good social end.” If the financial sector pursues short-term oriented profit through financial engineering and speculation—stock buybacks, leveraged first-to-default notes, power options, range accrual notes, high valuations on unprofitable tech startups, etc.—rather than long-term investment in productive ventures, then the only result will be self-enrichment at the expense of the public.

A recent report by Oren Cass from American Compass presents a picture of the current reality. Out of $200 billion “invested” into the United States last year through foreign direct investment, only a mere $4 billion was into greenfield investments (i.e., new ventures). The other $196 billion or so were merely acquisitions. Though from 2009 to 2017 the United States required an estimated $22.9 trillion to actually maintain growth, investment in that time period was only $19.6 trillion. A 10 percent decrease in available capital may not sound like much; it is actually very significant:

A pattern of wealth accumulation emerged in which nearly all gains go to the already-wealthy who hold capital. From 1989 to 2019, the liquid financial assets of households in the bottom 50% of wealth rose by $172 billion (+39%) while the top 10% gained $29 trillion (+291%). Factor in consumer credit, and the gains for the top 10% remain virtually unchanged while the bottom 50% find themselves with $1.5 trillion less liquid net worth than 30 years ago.

It is clear that a large segment of the public views the financial industry with antipathy, if not open contempt. The post-2008 Tea Party movement, the Occupy Wall Street movement, the support for socialist politicians (including Senator Bernie Sanders), and President Donald Trump’s 2016 election victory can all be attributed to this sentiment.

The financial sector’s prioritization of short-term profit over patient long-term investment and development has broader consequences. A lack of opportunities and too much financial/income inequality is a material-demographic basis for political and economic radicalism. More concerningly, if a large segment of the population feels perpetually disenfranchised, disengaged, and disappointed, why would this lot see any inherent value in maintaining social systems they feel no relation to? If the U.S. government will not tackle the issue of economic inequality, then won’t the public decide to take it upon itself to redistribute wealth on its own terms, all while expressing open contempt for modern capitalism? As Julius Krein has noted in American Affairs, $1 trillion in annual share buybacks (which serve no purpose other than further enriching asset holders),

…calls into question the viability of the free market capitalist system itself. After all, the entire social justification of free enterprise is that the private sector is the most capable of finding productive investments and deploying capital effectively. But when the corporate sector itself admits that it has no use for vast and ever-increasing amounts of capital, then someone else must find a use for it.

Yesterday, that meant trying to vote in politicians who promised to do as much. Today, it means taking advantage of technologically-enabled communications and democratized financial tools to deliberately target financial institutions, as the January 2021 short squeeze of GameStop and other companies’ equities so amply demonstrated. What will it be tomorrow?

Policymakers should deconsolidate the existing financial system by decentralizing it, and reduce gaping socio-economic inequality with carefully targeted redistributive efforts. This includes not just banks, investment funds, private equity firms, and so on, but also technology giants, as the latter have been expanding into this realm in recent years. Possible reforms include a return of Glass-Steagall, the creation of state-level public banks following North Dakota’s model, adding labor representation to the Federal Reserve’s Board of Governors, the closure of tax loopholes that disproportionately benefit capital interests, increasing liability on private equity firms, a budget increase for the IRS, and more.

Second, there is the role of manufacturing in the economy. Aside from providing tens of thousands of jobs, and the fact that it is essential for translational research—i.e., “learning by doing,” with innovation and improvements occurring as a result of work and experimentation on the assembly line—a strong manufacturing capability is critical for U.S. national security. Hamilton wrote in his 1791 Report on Manufactures that a domestic industrial base was essential so that America could be “independent on foreign nations for military and other essential supplies” and compete in global markets. The Union arguably won the Civil War because of its industrial capability. FDR in his time learned of the importance of manufacturing and supply chains in winning World War II. Manufacturing jobs are critical to restoring social stability, enabling the formation of families, and providing a viable path from the working class to the middle class. The loss of these jobs and the resulting unemployment are a recipe for social calamity. To quote Don Peck from The Atlantic,

The Great Recession may be over, but this era of high joblessness is probably just beginning. Before it ends, it will likely change the life course and character of a generation of young adults. It will leave an indelible imprint on many blue-collar men. It could cripple marriage as an institution in many communities. It may already be plunging many inner cities into a despair not seen for decades. Ultimately, it is likely to warp our politics, our culture, and the character of our society for years to come.

Decades of free trade-informed policy and business decisions, cheered on by the financial sector, have hollowed out the United States’ manufacturing capabilities. This has grave implications for America’s national security, military capacity, and ability to project power abroad. On January 14 of this year, the Pentagon released its Fiscal Year 2020 Industrial Capabilities Report, which “transcribes the defense department’s priority industrial base risks and vulnerabilities.” The findings are astounding. It asserts that,

... a U.S. business climate that has favored short-term shareholder earnings (versus long-term capital investment), deindustrialization, and an abstract, radical vision of “free trade,” without fair trade enforcement, have severely damaged America’s ability to arm itself today and in the future. Our national responses – off-shoring and out-sourcing – have been inadequate and ultimately self-defeating, especially with respect to the defense industrial base.