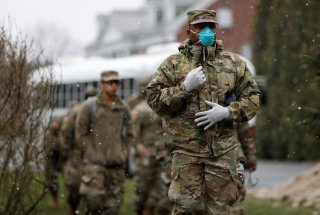 President Donald Trump’s fresh call up of National Guard forces in California, New York, and Washington represents a new phase in America’s pandemic response to the coronavirus, also known as COVID-19. Other states are now following suit. Escalating infection rates require an escalated response. Only, there is a right way and a wrong way to use the National Guard to fight a pandemic. Here’s how state leaders can get it right.

When Hollywood depicts a pandemic on screen, the arrival of the National Guard is usually the point when a fictional plague goes from bad to worse. Good cinema creates drama. There is nothing more alarming than seeing military vehicles rolling into town to shut down businesses or enforce quarantines. Thankfully, Hollywood is not in charge of the current crisis response. Elected leaders are. Using the National Guard as emergency law enforcement must be the last thing—never the first thing—that state officials consider, and then only under the most improbable of circumstances. However, the recent deployment of the National Guard is a great opportunity for local leaders and the public to consider what the service is, who it represents, and how it can help fight the coronavirus.

First, America’s Air and Army National Guard represent unique components of the military. Unlike other service branches, either the president or a state governor can deploy the National Guard—depending on the need and mission. During a domestic calamity, such as a natural disaster or pandemic, the National Guard’s job is only to assist. Civilian leaders run the show—never the National Guard. As just occurred with the activations in three states, the buck stops with elected governors. American democracy depends on it.

Finally, every state is going to have different requirements for responding to the coronavirus at the local level. Smart state leaders should avoid one-size-fits-all, open-ended missions. These missions need to be specific, and they should be geared to the specific activities for which the National Guard is best suited. Here, the National Guard can be a versatile lifesaver when it comes to building things, powering things, and moving people and things. That’s why smart governors will be wise to roll out their National Guard mobilizations in stages—only activating units that bring high-value capabilities in engineering, transportation, logistics, or communications, depending on the need.

Not only should state governors be selective about which National Guard capabilities to mobilize first, but they should also strive to be flexible about the individuals who are needed to muster when the call comes. Under current conditions, a mass statewide call-up—or worse, full-scale federalization of the National Guard—risks pulling first responders and medical professionals away from their civilian jobs. That is not a good use of the National Guard. As a smart solution: states should continue to mobilize National Guard forces under a part of the U.S. Code known as Title 32. This is what just occurred in California, New York, and Washington. It keeps National Guard forces under state control, while still providing federal financial support for their pandemic response mission.

As more states call up their National Guard units to fight the coronavirus, then a governor’s prime job must be to actively and clearly communicate the purpose of that mission. So far, the results have been mixed. There can be no room for ambiguity or confusion among the public—or the Guard. Above all, state activations should occur in stages—never all at once. And governors should not require the immediate muster of every unit, only a portion of the ones they need. Additional call-ups can come in stages. This will grant needed flexibility to local National Guard commanders—those who best know the men and women in their units—and allow some service members to stay in their essential civilian jobs on a case-by-case basis.

Clearly, panic is the last thing to do in a crisis. When it comes to the mobilization of America’s National Guard forces, we do not want state leaders to overreact when considering their options. For now, governors are wise to employ scalpels—not sledgehammers—when mustering the National Guard to fight the coronavirus.