NATO Is 70 and Past Retirement Age 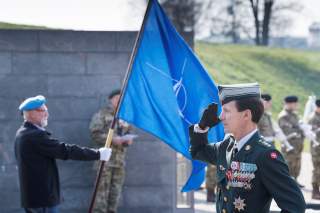 The North Atlantic Treaty Organization turned seventy last week and Washington has been celebrating. Yet for all the talk of “the most successful military alliance the world has ever seen,” NATO is more than just a little past its prime. The militaries of European member states are not only underfunded and increasingly irrelevant; the alliance itself is an irredeemable impediment to the actual national security of both America and Europe. At seventy, it is time for NATO to retire.

NATO was founded in 1949 to contain the Soviets, preventing them from dominating western Europe and thus accruing power to directly threaten the United States. The alliance was a realistic response to an existential threat to America's national security. The Soviet Union is dead, however, and Russia possesses only a fraction of the USSR’s power and reach.

NATO was also supposed to have an expiry date—at least for American ground troops in Europe. General Dwight Eisenhower, upon assuming command of all NATO forces in Europe in 1951, proclaimed that if “in ten years, all American troops stationed in Europe for national-defense purposes have not been returned to the United States, then this whole project will have failed.”

Nearly sixty years after Eisenhower spoke those words, and thirty years after the fall of the Berlin Wall, over sixty thousand U.S. troops remain in Europe. As MIT’s Barry Posen recently noted, those soldiers not only give Europeans the luxury of not paying for their own defense, they also enable America’s worst interventionist impulses by providing a network of bases and logistical hubs to project power into the Middle East and Africa, regions of diminishing strategic importance.

It is appropriate to judge post–Cold War NATO a failure. The alliance is a paper tiger, beset with slashed European defense budgets and hollow forces. It has become a social club and an appetizer, a prelude to European Union membership for the formerly-communist states of eastern and southern Europe. What it is not is a credible military alliance. Nor is it making America more secure.

NATO’s performance in the foolish limited wars of the past two decades has demonstrated Europe’s failure to take either funding or fighting seriously. In the Kosovo air campaign of 1999, the Royal Air Force nearly ran out of bombs and spare parts. Moreover, it was U.S. aircraft that had to conduct about two-thirds of all sorties during the seventy-eight-day war.

By the 2011 Libya intervention, the situation had actually gotten worse. Only eight of NATO’s then-twenty-eight members chose to fight, using their air forces. Additionally, most European countries ran out of smart bombs and had to be resupplied in a hurry by the United States.

In Afghanistan, some American servicemen muttered that NATO’s ISAF (International Security Assistance Force) actually stood for “I Saw Americans Fighting.” The more charitable would grant that it was “I Saw Anglos Fighting,” including the British and Canadian troops who held ground in the violent south and southwest. Despite the undoubted valor of soldiers from all nations in the coalition, the reality was that most European contingents were hamstrung by risk aversion, restrictive rules of engagement, and national “caveats” that limited their ability to fight. Some were even worse: the Italians were credibly alleged to have bribed Taliban forces not to attack them.

NATO’s relentless expansion has also long since passed the point of farce. The alliance, fifteen members strong throughout most of the Cold War, is about to add its thirtieth state, the newly-renamed North Macedonia. Macedonia boasts a tiny army of eight thousand men and a defense budget of $120 million—a rounding error for the Pentagon. The previous mouse that roared, the 2017 addition of Montenegro, is even more militarily irrelevant. Montenegro’s entire army has two thousand men—less than two U.S. battalions, or about 5 percent of the size of the New York City Police Department. These nations have been welcomed into a mutual defense alliance because that alliance is no longer serious about mutual defense.

These new NATO members provide virtually no military capability to help others, but they do bring one thing to the alliance: heightened tensions with Russia. There is ample evidence that the first Bush and Clinton administrations reassured Russian leaders that we would not expand NATO to their doorstep. We have done so, and now wonder why we are continually needing to “reset” relations with Russia.

We are told NATO’s Baltic states face the existential threat of invasion and reabsorption into Russia, but they sure don’t act like it. Despite a recent RAND Corporation war game that showed that Russian troops would reach the Baltic capitals in a maximum of sixty hours, the Baltic countries spend barely 2 percent of GDP on defense. Yet “E-stonia” can afford free internet throughout the nation.

NATO’s heavyweights, the United States excepted, are nearly as impotent per capita as the alliance’s Baltic and Balkan members. These countries have the money but they have chosen to shirk their Article 3 responsibilities and instead rely on the American taxpayer and the American soldier.

Britain, considered among the most capable NATO militaries, has slashed its defense spending to the bone since the 2008 financial crisis. The United Kingdom only clears the arbitrary 2 percent of GDP spending threshold through some pensions legerdemain. Britain can now fit its entire active duty army into Wembley Stadium, with room to spare. The Royal Navy is so short of personnel that it had a frigate and a destroyer tied to the pier in Portsmouth as “training ships” for most of 2017 and 2018.

Yet Germany manages to put Britain to shame in the free rider sweepstakes. With the fifth largest economy in the world, Germany dominates European politics. But its military, once a large and proud frontline force, is a laughingstock. Germany’s air force has regularly had less than a third of its fighter aircraft ready for combat. Its defense spending has drawn chiding and, now, outright attacks from generations of U.S. presidents. In a story reminiscent of the post–Versailles Reichswehr, due to equipment shortages German troops on a 2015 exercise used black broomsticks to simulate machine guns.

Europe still has ample resources to defend itself, even if one accepts the claim that Putin’s Russia is resolutely revanchist and not defensive or merely opportunistic in its conduct. Even without the United States, NATO has five hundred million people and a combined GDP of more than $10 trillion, more than triple Russia’s population and wealth. It also has two nuclear deterrent forces.

Only two possible reasons exist for European nations’ failure to field credible military power: they have either decided they do not regard Russia as a serious security threat, or they are content to rely on U.S. defense welfare.

Again, even the frontline Baltic states do not treat their national defense seriously. Germany, a “dangerous pacifist,” is the most unserious of all. In a fitting prelude to this week’s celebration, on March 18 the Wall Street Journal reported that Germany would renege on its goal of reaching even the paltry spending level of 1.5 percent of GDP on defense by 2024. Two years of President Donald Trump’s bluster and threats have achieved the same results as the efforts of his predecessors: nothing.

Germany’s attitude towards NATO sums up the key, irresolvable problem facing the alliance: Its Western European members have consistently shown they are not interested in defending Europe, not even from Russia. Polls show that a majority of Europeans, especially in the West, expect the United States to fight for the alliance but do not think their own soldiers should do the same.

NATO’s famed Article 5 is not an ironclad commitment to join hostilities. Though Article 5 states that member states “agree that an armed attack against one or more of them in Europe or North America shall be considered an attack against them all,” how each state responds is left to its own discretion. The commitment is to “such action as it deems necessary.” In the event of a conflict with Russia in the Baltics, particularly if there is even a hint of ambiguity via “little green men,” it is likely that western European states would offer only moral and maybe financial support to their allies.

The United States, meanwhile, is committing itself to fight—four thousand miles from home—for allies who won’t fight for each other. This state of affairs, which has become increasingly clear to both friendly and hostile onlookers, does not create security or stability. Instead, this hollow alliance invites brinksmanship, escalation, and miscalculation that could lead to nuclear war. Will Americans fight and die to defend Europe, when Europeans won’t? We may find out.

European collective defense should be built on a bedrock of shared sacrifice and credible deterrence. As long as the United States remains committed to defending Europe, Europe will lack the will and the means to defend itself. Nearly three decades of post–Cold War defense welfare has made Europe militarily weak and strategically unserious. American pressure for Europe to share more of the defense burden, going back to the Kennedy administration, has had little effect. Americans are increasingly fed up with this unsustainable state of affairs. Only the shock of a U.S. withdrawal from NATO can spur the European nations to commit themselves to their own collective defense.