NATO Allies Should Not Be Judged on Defense Spending Alone 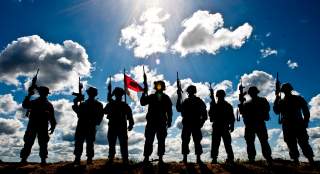 Last week, President Donald Trump embarked on his first big wave of foreign travel since his January inauguration. For Europe-watchers, the most anticipated event during this trip will be Trump’s first meeting with NATO heads of state and government in Brussels on May 25. On the docket for the day will be a tour of NATO’s shiny new headquarters, and a dinner serving up discussions on counterterrorism, burden sharing and other important topics. While this meeting may not be as long or as jam-packed with deliverables as usual NATO Summits, just having the meeting is consequential in and of itself. But for the president, Trump will likely hone in on one specific issue: European allies meeting the 2 percent of GDP target for defense spending.

For transatlanticists, increasing alliance defense spending is an issue on which all agree. But the issue is broader than just how much nations spend on defense. The issue is burden sharing, namely, is the burden of a common defense equally shared among the allies? The definition of burden sharing is not agreed among all, and each nation has its own narrative describing how it help carry the burden. But that wider definition of burden-sharing should be the context within which Trump judges how well allies are carrying their fair share of the load, not just how much they spend on defense.

It is no secret that Trump has long been critical of how much Europeans spend on defense, and he famously referred to NATO allies as “free riders” during his campaign. To be sure, his rhetoric has somewhat softened since taking office, and he stood shoulder-to-shoulder with Secretary General Jens Stoltenberg last month and declared that “NATO is no longer obsolete.” But Trump’s recurring talking point seems limited to warning allies that they must spend 2 percent of their GDP on defense, a target agreed by the allies at the 2014 NATO Wales Summit. While it is true that European allies must make a priority of spending more, measuring burden sharing solely by how much a nation spends is over simplistic. Such a benchmark leaves out other important ways nations help bear the burden and also ignores key political and geostrategic factors that limit how much nations can spend on defense.

First and foremost, it is important to note that so far Estonia, Poland, Greece and the United Kingdom are the only European NATO members who hit the 2 percent of GDP spending target. While this is certainly a laudable achievement for these four NATO allies, there are many other members who have contributed significantly to NATO’s mission of collective defense. Norway, for example, is in the process of purchasing high-end military capability, including F-35s, P-8 maritime patrol aircraft and four new submarines to replace the current fleet. These purchases will help NATO monitor and control the increasingly contested North Atlantic. But for some, that’s not good enough because Norway only spends 1.5 percent of its GDP on defense.

Similarly, Lithuania is home to one of NATO’s new enhanced forward presence battalions, and has plans to spend around 100 million euros on two batteries of the Norwegian Advanced Surface-to-Air Missile system (NASAMS), which will strengthen deterrence in NATO’s east. But Lithuania spends less than 1.5 percent of its GDP on defense, and so those achievements won’t count against the 2 percent benchmark.

Both of these examples demonstrate a critical point: it is not only how much a nation spends on defense that matters, but what that nation spends it on and its willingness to use it. More doesn’t always equal better, and there is no guarantee that increased defense spending will lead to more efficient defense spending.

Second, this one-dimensional measurement tends to over-militarize solutions to European security problems. Over the past few years, Europe has experienced a wave of mass migration, increased support for far-right parties, and a breakdown of trust between political elites and those whom they serve. These issues will determine the future of Europe, and leaders must place increased focus on addressing the grievances of Europeans who feel like they have been negatively affected by globalization, trade and migration. Unfortunately, few, if any, of these issues can be solved by more defense spending.

Lastly, there is only so much some European leaders can do to increase the defense line in their budgets. European leaders are often being pulled between the many requirements of both NATO and EU membership. For example, the EU’s Stability and Growth pact requires countries to keep their government deficits below 3 percent of GDP. NATO, on the other hand asks its members to hit the 2 percent of GDP spending target. But it’s hard to balance between both. If meeting the former and not the latter means the difference between winning and losing the next election, common sense can tell us which will probably take precedent.

At the end of the day, European allies must do more to contribute to their own defense; the United States should not be responsible for filling in the gaps. To narrow the gaps, it makes sense to have a defense-spending target for allies to reach. But an ally’s success or failure at burden sharing should not be measured by defense spending alone. Transatlantic security can only be ensured by partners willing to undertake a full range of actions, from foreign assistance to participation in allied operations. Equitable burden sharing is the standard against which nations should be judged; increased defense spending only helps you get there.