NATO Is Giving Montenegro a Chance. Why Not Us? 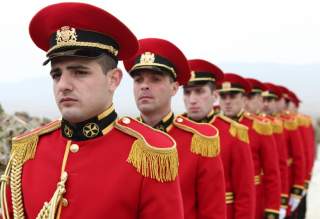 The challenges in Georgian-Russian relations are not new. Back in 2008, Georgia’s aspirations to membership in Euro-Atlantic institutions helped to trigger the full-scale ground invasion of sovereign Georgian territories. Russia subsequently recognized the independence of two breakaway regions, Abkhazia and South Ossetia; it also built military bases and stationed large numbers of troops in Georgia’s occupied regions.

Moreover, Russia moved ahead by applying “creeping annexation” as a tool to press on the government of Georgia, and these breakaway regions have become the spear of an aggressive Russian strategy.

On top of that, South Ossetian separatists, along with Russian troops, initiated a process of illegal border “demarcation” in the villages of Orchosani and Khurvaleti. As a result, about two kilometers of the Western Route Export Pipeline fell within occupied territory. Furthermore, there are projections that the 1,800-meter length of oil pipeline passing through the village of Karapila, near the city of Kaspi, could share the same fate.

In this regard, the NATO Summit of Warsaw 2016 should bring immense progress for Georgia, since members will have to respond to these threats and challenges that have accumulated since the NATO Bucharest Summit in 2008, when Georgia and Ukraine were on the edge of NATO membership.

Taking this longer view, the war against Georgia (which broke out just months after Bucharest) has proven to be the beginning of Russia’s reemergence on the global political stage since the collapse of the Soviet Union. Georgia’s case was the first in a chain of Russian actions, most prominently, the annexation of the Crimean peninsula and further moves in other regions of Ukraine.

The West’s slow reaction on Ukraine, quite like that in the aftermath of the Russo-Georgian War, boosted Russia’s political self-esteem, encouraging further action in places like Syria. There, Moscow has, in the words of NATO's top general at the time, Philip Breedlove, "weaponized" the refugee crisis against the West; deliberately exacerbated migration crises increased the flow of hundreds of thousands of Syrian migrants to Europe, serving to destabilize and undermine European political structures—indeed, the fear of migrant flows was surely a factor in the recent British vote to leave the European Union.

Thus, the West faces a complex of security concerns and political challenges that could have been avoided if it had expressed a firm willingness back in 2008 to grant membership to Ukraine and Georgia.

In spite of that, there have been huge security dilemmas regarding Georgia. On the one hand, the country is currently outside of an alliance with the single largest contributor to global security. On the other hand, it would be a colossal security consumer within NATO and a potential troublemaker with Russia.

Regarding future expectations of the Warsaw 2016 summit, Georgia expects a number of conceivable outcomes.

According to various analysts and politicians, the Warsaw Summit will see the concluding steps towards a Membership Action Plan (MAP) for Georgia. This argument is backed by stressing the country’s important contributions in international missions and numerous achievements on the pathway to NATO.

For instance, Georgia has been assisting and contributing in the NATO-led International Security Assistance Force (ISAF) in Afghanistan since 2004, and was the largest non-NATO troop contributor.

Nevertheless, according to a statement by the Defence Minister of Georgia, “MAP is the past for Georgia.” To be more specific, the statement stresses that Georgia has all necessary tools for further integration with NATO. Tbilisi has fulfilled all the tasks given from Brussels; the remaining obstacles are political and have nothing to do with the progress Georgia has made.

Moreover, NATO’s decision to send an invitation to Montenegro confirms NATO’s open-door policy for newcomers—and could raise expectations in Tbilisi about the formalization of Georgian membership. After all, Montenegro is a highly corrupt country with weak rule of law, poor governance, increasing pressure on the media and lower support for NATO membership among its population. By contrast, Georgia has been waiting to join NATO for many years, backed by massive public support. Georgia has modernized its defense infrastructure, implemented transparent civilian control over the military and essentially defeated corruption.

It thus would appear that membership in NATO is more a political process than an issue of NATO interoperability or standards. From Tbilisi’s viewpoint, the denial of its membership is aligned with a Russian factor—more specifically, that Moscow claims the South Caucasus as its own backyard, or in other words, as its sphere of influence. Indeed, those who would accede to Russia’s aggressive stance and opposition to NATO’s further expansion near its borders are giving it an informal veto on Ukraine and Georgia. They thus treat Russia as if it is a NATO member state whose consensus is required. NATO leaders, of course, protest that no country outside NATO has a veto. If that’s true, why is Georgia still not a member?

Unfortunately, from the perspective of some NATO nations, Moscow is a partner in energy security. For others, it’s the one holding all the cards on Syria and refugees. Still others fear that Georgia will be a security consumer and even a troublemaker. Yet this ignores that inviting Georgia into NATO will have a number of positive implications. By admitting Georgia into NATO, the West will strengthen its position in the South Caucasus. France and Germany, longtime opponents of Georgia’s accession to NATO, will boost their energy security through Georgia as an energy corridor. Russia’s energy leverage, frequently applied for geopolitical purposes, will be lessened. The upcoming Southern Gas corridor consist of the huge energy power, will cross Georgian territory en route to Turkey and Europe. Thus, Georgia is a critically important country to provide Europe with alternative energy supplies. Accordingly, the European Union and the United States have endorsed the corridor as the way to reduce Europe’s reliance on Gazprom. The West thus must support Georgia for its own interests, especially in terms of energy diversification.

And what about France? While Paris has been an opponent of Georgian membership, Tbilisi has managed to forge closer ties by signing military contracts with French military companies. Myths of an embargo on arms sales to Georgia were busted. Further, Georgia contributed troops to the European Union’s peacekeeping mission in the Central African Republic, joining a large French contingent.

As a result, Moscow is anxious. Deeper cooperation between Georgia and France could indicate a change of heart in Paris.

And there have been a number of other positive strides in NATO-Georgian cooperation. For instance, at the 2014 Wales summit, allied leaders identified Georgia as one of five countries eligible for enhanced cooperation and dialogue opportunities with the alliance. They endorsed a Substantial NATO-Georgia Package, raising big hopes in Tbilisi.

The key aspects of the Substantial NATO-Georgia Package set the country as a primary beneficiary of NATO’s Defense Capacity Building Initiative. Additionally, the establishment of the NATO-Georgia Joint Training and Evaluation Center (JTEC) enhanced and strengthened defense and security capabilities.

Georgia also became the fourth nonmember state to join the NATO Response Force (NRF). It is necessary here to clarify that NRF encompasses deeper engagement and cooperation between the Georgian Armed Forces and the alliance. U.S.-Georgian defense cooperation is also up, with a second edition of the joint military exercise Noble Partner held in May. Drills like these enhance NRF interoperability.

In Warsaw, with the growing tension between the West and Russia, the alliance may decide to bolster its ties by signing a special partnership agreement with Georgia and Ukraine. There are discussions among members of the alliance about offering an association agreement with a “28+2” framework, allowing the Georgian and Ukrainian militaries to further intensify cooperation with NATO. Official Tbilisi had perceived the summit as an opportunity to receive a MAP. However, from the perspective of the existing realities in the region, even smaller steps towards NATO in the 28+2 format would be a huge improvement.

Of course, it is easy to expect an impulsive, harsh decision from Russia regarding any attempt to welcome Georgia and Ukraine as full NATO members. An association agreement, on the other hand, could lift the formal requirement of the integration of these countries into the NATO Command Structure, avoiding formal membership and thus lessening Russian anxiety. This would raise the question, however, of whether Article 5 defense guarantees would extend to Georgia in the case of war. Of course, it would be unlikely that NATO states would agree to give Article 5 guarantees to Georgia without it also taking up the full obligations of membership, but in theory it might be possible for an association agreement to include deeper Georgian contributions in return for deeper protections—membership lite, or membership under another name.