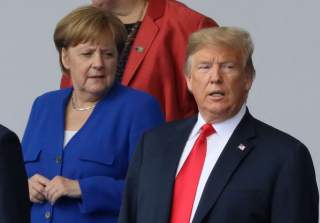 President Trump’s confounding behavior during the recent meeting with North Atlantic Treaty Organization (NATO) members and at this week’s Helsinki summit with Russia has produced no shortage of dismay among those who believe that the defense of the European continent is an important national security interest of the United States. Although Trump’s larger geopolitical agenda is not obvious, when it comes to NATO itself he has been quite clear and consistent about the source of his dissatisfaction: money. Specifically, he has been insistent that America’s partners make an insufficient investment in defense as a percentage of their GDP, to the detriment of the United States. This is not a new position either for Trump or for America, which long has encouraged allies to adjust the nature and type of their defense investments. What is new is Trump’s effort to manipulate member states simply into paying up for fear of a U.S. exit. Given what we know of President Trump neither his focus on money nor his willingness to threaten U.S. withdrawal is surprising. They are, however, beside the point and counterproductive.

Defense budgets long have been a barometer of power in the international system because they are suggestive of state capabilities and intentions. It is undeniable that money buys militaries, and militaries can be used to impose one’s will. Still, money spent is an imperfect measure of actual might, both because raw accounting glosses over overhead expenditures and because it assesses warfighting readiness only presumptively. Even less definitive, although still prized, is the information offered by defense budgets about state intentions. This is because spending on defense as a percentage of GDP hints at both a country’s economic vitality and at its national priorities.

Trump thus is not entirely incorrect to interpret less-than 2 percent of GDP spending by a subset of important NATO members as meaningful, not least because they may, in fact, reflect America’s partners’ priorities and their comfort in passing defense costs on to Washington through the collective defense clause in Article 5. If President Trump wishes to convince America’s allies that more spending is required, however, it’s unlikely that complaints about fairness will be effective. Statecraft, after all, is a fundamentally competitive endeavor in which leaders broker compromise out of necessity, not out of benevolence. It would be reasonable to assume that Trump’s fixation on what is or is not fair reads to leaders abroad as nothing more than personal petulance and a play to Trump’s domestic base.

This effect is magnified by the fact that it is not at all clear what actual benefit would adhere to the United States were its allies to start paying their “fair share” by meeting the 2 percent threshold. If the gain is understood to be monetary, then the underlying assumption must be that a shift upward in allied defense spending will translate into a concomitant decrease in the U.S. outlays on the common European defense. The United States European Command (USEUCOM) currently manages operations that emanate from, and transit through, approximately 350 installations on the European continent, 10 of which are major bases. Each of the U.S. military’s service arms encamps at these sites sizable numbers of personnel (more than 60,000 in total) and stores large quantities of material. Furthermore, America operates a regular cadence of rotations, exercises, and training operations in service of independent USEUCOM missions and to support those of other combatant commands. U.S. Central Command, for example, relies upon USEUCOM for the transit of supplies in support of its activities in Afghanistan.

The total 2019 budget request from USEUCOM to fund the European Defense Initiative (EDI) is $6.5 billion, registering far less than the $114 billion that would be produced by additional European spending and constituting less than one percent of the U.S. defense budget. Certainly, the proposition is not that USEUCOM would go out of business were allied spending to increase, and so the financial effect would be even less. It bears noting that neither Trump himself nor his Administration more generally has given any indication of how, in what operational areas, or by what measure, increased allied contributions would relieve the burden on the United States.

Understanding these dimensions of lessening America’s commitment is important because the wrong reductions in the wrong places at the wrong times could have a grave effect. USEUCOM’s and the EDI’s existence is far from being anachronistic. The old saw that the likelihood of catastrophic war is decreased by keeping “the Americans in, the Russians out, and the Germans down” remains apt. After all, the last decade made clear that Russia is far from content with its current reach and that it is willing to take sizable risks to have more. One wonders what they might do in an environment in which those risks appear increasingly to lessen. So too is the U.S. presence in Europe essential to the panoply of activities undertaken to counter violent extremism; to bolster the legal transit of goods that are essential to the global economy; to manage transnational crime; and to demonstrate to regional powers the United States’ ability and willingness to project power quickly and en masse. America’s standing presence in Europe, which is dependent upon the goodwill of host nations and their belief in an alignment of interest, in other words, remains essential to the United States’ ability to shape the international environment such that it conforms more to its preferences rather than less.

Fair in financing or not, both the United States and its European partners benefit from NATO’s continuation, and it is unlikely that even universal adherence to the 2 percent benchmark would change much in the defense of the continent. To threaten the collapse of the alliance on the basis of an arbitrary measure, however, can change a lot—most importantly the perceptions of Russia, Iran, and China, who are at the ready to seize any opportunity to ingratiate themselves with friends the United States alienates. If the Europeans continue to fall short, and President Trump makes good on the threat to opt out of NATO with the logical consequences, the psychological balm of being principled about fairness will be cold comfort indeed.

Melanie W. Sisson is Senior Fellow at the Stimson Center, where she leads the Defense Strategy and Planning Program. She holds a Ph.D. in political science and an MA in international affairs.

Image: German Chancellor Angela Merkel and U.S. President Donald Trump are seen as they pose for a family photo at the start of the NATO summit in Brussels, Belgium July 11, 2018. REUTERS/Reinhard Krause