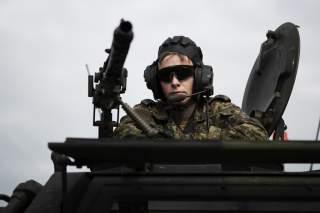 Before President Donald Trump attempts real diplomacy with Russian President Vladimir Putin at a summit in Helsinki on July 16, he'll first be subjected to another summit. That first summit is a gathering of leaders of the North Atlantic Treaty Organization (NATO). These leaders continually assure the United States they are America's best allies, even as most contribute little to America's defense and rack up huge trade surpluses with the United States. Trump will insist on a better deal but should go farther and wind down U.S. membership in NATO.

After the alliance was established in 1949, its first secretary general, Lord Hastings Ismay, summed up its purpose concisely: “to keep the Russians out, the Americans in, and the Germans down.” The unofficial mission matched the time well: Western Europe’s postwar future was clouded by the prospect of a Soviet invasion, American insularity, or German militarism—all possible given the preceding decades of history.

Nearly seventy years later, none of these concerns still exist. Furthermore, NATO's opposing alliance during the Cold War, the Warsaw Pact, quit the Soviet Bloc in 1989, and the Soviet Union itself passed into history in 1991—twenty-seven years ago.

Despite endless searches for a new mission to justify its massive burden on U.S. taxpayers, NATO has failed to be of much use since then. As its boosters like to remind us, after 9/11, the alliance invoked its Article 5 mutual-defense provision on our behalf. But action from America’s allies did not follow the grandiose gesture—the NATO mission in Afghanistan relied mostly on U.S. forces and effectively failed.

Today, the alliance’s bureaucrats and some member states spotlight a threat from Russia as a reason for keeping the organization alive, along with a laundry list of “train and equip” missions.

Yet NATO members' defense budgets don't reflect a real sense of danger from Russia or anyone else. Among the twenty-nine members, only the United States is really serious about its Article 3 obligations to defend itself, spending approximately $700 billion or 3.5 percent of its GDP on defense. No other NATO member comes close to this proportion, and the vast majority fail even to meet the modest, self-imposed requirement to devote at least 2 percent of GDP to defense.

Britain and Poland are rare members that meet the 2 percent requirement. One of the worst free-riders is Canada, which spends just 1 percent of its GDP on security, amounting to $20 billion. Furthermore, Germany spends a similarly pathetic 1.2 percent.

Compare that to non-NATO members facing real threats, some of which spend 5-10 percent of their GDPs on defense. These include Saudi Arabia and the United Arab Emirates, who must contend with Iran and spend nearly a combined $100 billion. Israel, which faces the same enemy, adds $15 billion to the equation.

Despite protestations of poverty at a time when their economies have never been larger, NATO members are more than willing to rack up additional liabilities, knowing America has their back. Last year, the alliance welcomed Montenegro. It is now poised to admit the Former Yugoslav Republic of Macedonia, which would mean the United States is pledged to defend a nation that devotes just $120 million per year to its own defense, not quite as much as the Cincinnati Police Department.

But the reality is there is no truly capable Russian foe seriously threatening the West. Russia has one million uniformed personnel in its military, the world’s second-largest behind America, but the European Union could easily afford to match that with its combined $17 trillion economy—ten times larger than Russia’s. However, it needn’t bother as Moscow spends just $61 billion on its overwrought military, which doubles as an employment program.

Russia’s Vladimir Putin has gotten the most from Russia’s military, occupying parts of Georgia and Ukraine and gaining influence in Syria by backing the Assad regime. Still, his success in all three cases rested heavily on surprises that Moscow seems unlikely to be able to repeat against prepared and adequately funded European militaries.

Yer we should expect to hear none of this nuance at the NATO summit, as poohbahs of the dying old European political order gather to tut-tut President Trump in the alliance’s fancy new $1.4 billion headquarters, funded predominantly by American taxpayers.

To get out of this abusive relationship, Trump should begin the process of limiting America's role in NATO. A good model is that of Sweden, which cooperates with NATO on some matters and not on others. Such an approach could allow joint training, but end the practice of having over-burdened U.S. taxpayers foot the bill for wealthy Europeans' security. As part of this plan, Trump could mothball U.S. bases in Europe and shift most resources spent there and in the Atlantic to the Indo-Pacific region, where China and Iran pose real threats to America—and against which NATO is irrelevant.

Europe is prosperous and treats America like a patsy. Let it stand on its own.