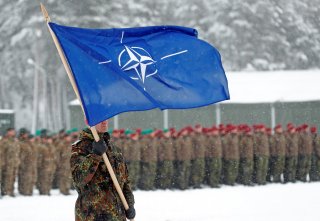 The coronavirus pandemic that is ravaging the world brings a prolonged public health crisis into sharp focus—along with the bleak prospect of a long-term economic crisis that can destroy the social fabric across nations.

World leaders need to reassess expenditures of resources based on real and present threats to national security—to reconsider how they may be tackled. A continuing commitment to NATO, whose global ambitions are largely driven and funded by the United States, must be questioned.

In 1949, the first Secretary-General of NATO, described NATO’s mission as “to keep Russia out, the Americans in, and the Germans down.” Seventy years on, the security landscape has totally changed. The Soviet Union and the Warsaw Pact are no more. The Berlin Wall has fallen, and Germany has no territorial ambitions on its neighbors. Yet, America is still in Europe with a NATO alliance of twenty-nine countries.

In 1993, one of the co-authors, David Speedie, interviewed Mikhail Gorbachev and asked him about the assurances he claimed to have received on NATO’s non-expansion eastwards. His response was blunt: “Mr. Speedie, we were screwed.” He was very clear in his judgment that the trust that the Soviet Union had placed in the West, with the reunification of Germany and the dissolution of the Warsaw Pact, was not reciprocated.

This raises a fundamental question: whether NATO today enhances global security or in fact diminishes it.

We believe that there are ten main reasons that NATO is no longer needed:

One: NATO was created in 1949 for the three main reasons outlined above. These reasons are no longer valid. The security landscape in Europe is totally different today than seventy years ago. Russian president Vladimir Putin actually proposed a new continental security arrangement “from Dublin to Vladivostok,” which was rejected out of hand by the West. If accepted, then it would have included Russia in a cooperative security architecture that would have been safer for the global community.

Two: It is argued by some that the threat of present-day Russia is why America needs to stay in Europe. But consider this: The economy of the EU was $18.8 trillion before Brexit, and it is $16.6 Trillion after Brexit. In comparison, the economy of Russia is only $1.6 trillion today. With an EU economy more than ten times the economy of Russia, do we believe that Europe cannot afford its own defense against Russia? It is important to note that the UK will surely stay in a Euro defense alliance and will very likely continue to contribute to that defense.

Three: Cold War I was one of extreme global risk—with two superpower adversaries each armed with thirty-thousand-plus nuclear warheads. The current environment presents an even greater danger, that of extreme instability arising from non-state actors, such as terrorist groups, acquiring weapons of mass destruction. Russia and the NATO principals are uniquely capable of addressing these threats—if they act in concert.

Four: The only time a NATO member has invoked Article 5 (the “attack on one is attack on all” clause) was the United States after the terrorist attack of Sept 11, 2001. The real enemy was not another nation but the common threat of terrorism. Russia has consistently advanced this reason for cooperation—indeed Russia provided invaluable logistical intelligence and base support for the post–9/11 Afghan engagement. Coronavirus has dramatized another grave concern: that of terrorists possessing and using biological weapons. This cannot be underestimated in the climate in which we now live.

Five: When Russia has a potential enemy on its border, as with 2020 NATO military exercises, Russia will be more compelled to veer toward autocracy and the weakening of democracy. When citizens feel threatened, they want leadership that is strong and affords them protection.

Six: The military actions of NATO in Serbia under President Clinton and in Libya under President Barack Obama, along with almost twenty years of war in Afghanistan—the longest in our history—were substantially U.S. driven. There is no “Russia factor” here, yet these conflicts are used to argue a raison d’etre chiefly to confront Russia.

Seven: Along with climate change, the greatest existential threat is that of a nuclear holocaust—this sword of Damocles still hangs over all of us. With NATO having bases in twenty-nine countries, many along Russia’s borders, some within artillery range of St. Petersburg, we run the risk of a nuclear war that could destroy humankind. The risk of accidental or “false alarm” was documented on several occasions during the Cold War and is even more frightful now, given the Mach 5 speed of today’s missiles.

Eight: As long as the United States continues to spend close to 70 percent of its discretionary budget on the military, there will always be a need for enemies, whether real or perceived. Americans have the right to ask why such exorbitant “spending” is necessary and whom does it really benefit? NATO expenditures come at the expense of other national priorities. We are discovering this in the midst of the coronavirus when the health-care systems in the west are woefully underfinanced and disorganized. Diminishing the cost and needless expense of NATO will make room for other national priorities of greater good to the American public.

Nine: We have used NATO to act unilaterally, without congressional or international legal approval. America’s conflict with Russia is essentially political, not military. It cries out for creative diplomacy. The truth is that America needs more robust diplomacy in international relations, not the blunt military instrument of NATO.

Ten: Lastly, exotic war games in Russia’s neighborhood—coupled with a tearing up of arms control treaties—provides a growing threat that can destroy everyone, particularly when international attention is focused on a more elusive “enemy.” The coronavirus has joined the list of global threats that demand cooperation rather than confrontation even more urgently than before.

There will inevitably be other global challenges that countries will face together over time. However, NATO at seventy is not the instrument to address them. It is time to move on from this curtain of confrontation and craft a global security approach, one that addresses the threats of today and tomorrow.

Sharon Tennison is President of the Center for Citizen Initiatives. David Speedie is the founder and former Director of the program on U.S. global engagement at the Carnegie Council for Ethics in International Affairs. Krishen Mehta is Senior Global Justice fellow at Yale University.