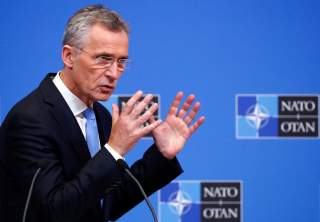 In 1949, the North American Treaty Organization (NATO) was founded as an intergovernmental military alliance to provide collective defense following World War II and the subsequent rise of Soviet Communism as the dominant threat to Western Europe. With the Cold War era long gone, President Trump has allegedly inquired about withdrawing from the alliance, and the subsequent cranial explosions of the Washington establishment were heard up and down the Acela corridor.

Is such a decision warranted given the present circumstances? The United States has been practically begging the other member countries to contribute the agreed upon two percent of GDP for defense for decades. Many summits have passed with “commitments” and “strong statements” but nothing has really changed. At last glance, only five of the twenty-nine member nations—America, Britain, Greece, Estonia, and Poland—meet the two percent threshold. Although President Trump’s hard line regarding burden sharing is having an impact on funding levels, it might be a case of too little, too late.

Americans must ask why wealthy allies continue to free-ride on the back of the American taxpayer. If defense spending isn’t a priority for them, then why should it be a priority for America?

The alliance has been successful and the principal threat that necessitated it—expansionist Soviet Union—has been gone for thirty years. However, since then, NATO has extended membership to former Warsaw Pact countries that previously provided a buffer between Russia proper and Western Europe. This is an extremely provocative action and has made an increasingly paranoid Russia even more so. The accession to NATO of countries like Poland in 1999 and the Baltics in 2004 occurred not because Russia was ok with it, but because it couldn’t do anything to stop it. The Russo-Georgia War of 2008 and the annexation of Crimea from Ukraine in 2014 were the Russian answers to those nations’ flirtations with joining the bloc.

Geopolitically, bonds within the alliance have begun to fray as the initial common threat diminished and national interests diverged. Look no further than Turkey’s adventures in Syria. Be it a personal grudge between Erdogan and Assad, a ploy to solidify power at home, or visions of a new Ottoman Empire, Turkey’s actions have put other NATO members in an awkward position; potentially be dragged into a larger regional conflict because a member state is fighting a proxy war with Russia’s client.

Or observe Russia’s exports of natural gas to Germany and other countries in Eastern Europe. Not only does this undercut the U.S. ability to sell its gas to allies, but it precludes those nations from presenting a unified front condemning Russia when necessary, which is kind of the overall point of the alliance.

Ideologically, we observe the biggest irony. NATO was the free capitalist West’s bulwark against the authoritarian communist Soviets, protecting not only fertile European territory and vibrant economies, but the very ideology that allowed those economies to thrive; liberty. But by subsidizing Western Europe’s defense, America afforded them the ability to redirect resources normally earmarked for national defense and become welfare states in their own right, embracing the very collectivist ideas (and state control that comes with them) that the West was supposed to be fighting against.

Given the overall shifting dynamic, two uncomfortable questions inevitably arise. Are Americans and NATO members really willing to go to war over Montenegro or Estonia, or a prospective new member? If not, how will that reflect on America’s other treaty obligations?

While stopping short of withdrawing from the alliance completely at this time, America should absolutely take a much harder line with nations that are habitually delinquent in their financial commitments and military capability development and simultaneously reduce U.S. commitments so that U.S. resources can be shifted to solving America’s own challenges here at home.

Greg Archetto was a foreign affairs officer at the Bureau of Political Military Affairs at the State Department and a security assistance officer at the Defense Security Cooperation Agency, Office of Secretary of Defense.