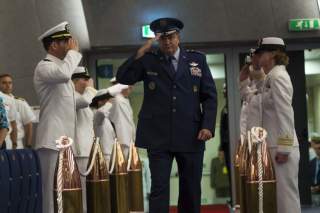 Gen. Philip Breedlove gave his annual report to the House Armed Services Committee on Wednesday in his capacity as Commander of U.S. forces in Europe. As expected, the speech focused heavily on Russia.

But it also included a number of statements that seemed to lump together NATO members with nonmember states. His report is just the latest iteration of this semantic habit, common in official statements from Washington. But such fuzzy thinking about America’s allies can be harmful, diverting attention from necessary reforms inside NATO, and giving states like Russia the impression that the U.S. response to crises in Georgia and Ukraine may be representative of the U.S. response to any attack on a NATO ally.

Though officials never explicitly conflate NATO members with other Eastern European states like Ukraine, Georgia and Moldova, they are often discussed in the same breath, or described en masse as the “transatlantic community.” In the case of Wednesday’s congressional hearing, Gen. Breedlove consistently used the term “NATO allies and partner countries” throughout, rarely addressing the needs of NATO members as unique.

His prepared testimony frequently seemed to accord the security concerns of nonmembers more prominence than those of member states, including three different sections focusing on threats to Partnership-for-Peace countries (i.e., Georgia, Moldova and Ukraine), as well as a section on frozen conflicts in these states.

In contrast, actual NATO members in the Baltics and Eastern Europe were discussed in depth in only two sections. While Breedlove’s remit as the senior military commander in Europe necessarily means he should be concerned about all potential threats in Europe, the time spent detailing Ukraine and Georgia’s security concerns was excessive.

Unfortunately, this focus on states that aren’t NATO members is detrimental for several reasons, including perpetuating the long-held idea that Georgia and Ukraine will eventually become NATO members. Though Russia’s recent actions in Ukraine are indefensible, there is no denying that the unquestioning acceptance by U.S. leaders of future membership for Georgia and Ukraine is one root of the current crisis.

Given the events of the last year, there is no longer any realistic likelihood that these states will join NATO; they may be part of NATO’s Partnership-for-Peace program, but so is Russia. Yet officials continue to talk as if our relationship with these states were on par with that of full NATO members.

Of greater concern is the idea that this approach makes Washington’s official stance on defense of Eastern Europe harder to discern. Many commentators have argued that Washington’s unwillingness to intervene in Ukraine makes a Russian intervention in the Baltics more likely, and have speculated on what would happen if NATO doesn’t respond to an attack on a member state. Yet this shouldn’t be in question: one of these cases involves a treaty commitment on the part of the United States, while the other does not. Likening inaction in Ukraine to U.S.-NATO treaty commitments is a straw man argument, made worse by the continual conflation of NATO allies and nonmember “partners.” This could be dangerous if it encourages Russia to believe that U.S. commitments to Ukraine and the Baltics are comparable.

The continuing public focus on the needs of nonmember states over member states also inhibits much-needed discussions on the necessity for reform within NATO. Many NATO members, including some in Eastern Europe, spend far too little on defense, with only three states other than the United States achieving NATO’s target of 2 percent of GDP. Most also need substantial military reform in order to make any increased spending effective. At present, the United States bears much of the cost responsibility for defense of European states, a situation which is both untenable and unnecessary. NATO also suffers from a lack of common vision among members, a problem compounded by NATO’s ill-considered expansion throughout the last decade. The emphasis on nonmember states diverts attention from these problems, making them more difficult to solve.

Breedlove’s comments yesterday were just the latest example of official Washington’s tendency to equate NATO member states, which are formal treaty allies, with those states which are simply considered partners. This fuzzy approach to transatlantic security can have real-world consequences of sending misleading signals on U.S. commitment to NATO members and placing the focus on the needs of states like Ukraine and Georgia, rather than on the necessities of strengthening NATO. Rather than borrowing concerns from other states, U.S. leaders should work more closely with NATO allies to solve the problems we already have.