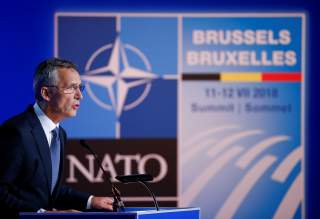 Russia has mastered the pipeline diplomacy. In fact, coercive energy policy became Moscow globally recognized trademark. Yet, the Russian aggression against Ukrainian vessels in the Black Sea in November 2018 showcased that Moscow is ready to go beyond political and economic tools to protect what it defines as its critical infrastructure.

The West decided to turn a blind eye to cautionary signs that appeared prior to the Kerch Strait incident. A major warning came in the spring of 2018 when Russia closed down parts of the Baltic Sea for a navy live-fire exercise. This affected the air and maritime traffic in and around the Baltic Sea region. Yet, more importantly, the exercise was purposefully calculated to take place around the planned route of the Nord Stream 2. This pipeline, should it be completed, would become a key critical infrastructure asset. Capacity-wise, it would complement Nord Stream 1. In fact, their combined volume would allow Russia to ship a total of 110 billion cubic meters under the Baltic Sea, straight to the heart of the German gas market. More importantly, Nord Stream 2 would allow Moscow to redirect gas supplies destined for other European consumers that are now importing it via the pipelines running through Ukraine. This would have a detrimental impact on the Ukrainian economy. For example transit fees and levies for Russian gas transiting Ukraine’s territory provide Kyiv with roughly $3 billion per year. For the sake of comparison: in 2017 Ukraine’s military expenditures totaled $3.6 billion.

Nord Stream 2 would also allow Russia to retain its grip on the European gas market. Time is key in that game as the global gas market undergoes structural changes. Thanks to the shale gas revolution the United States has already outpaced Russia as the world’s largest gas producer. Gas is an increasingly globally traded commodity thanks to the rapid deployment of LNG terminals. Contrary to conventional wisdom, 2018 proved that American LNG can compete with piped gas from Russia on the European markets. In fact, last year Poland concluded three long-term contracts for the supplies of U.S.-made LNG.

Russia needs to secure its fight against new suppliers and infrastructure projects that could undermine its position. To achieve this goal and push its foreign-policy agenda, Moscow has been relying on three main tools.

First, it needs to tackle propaganda and disinformation. The recent Central European diversification efforts, tough fully aligned with the objectives of the EU’s Energy Union, came under heavy fire in media outlets and social-media channels sponsored by Moscow. They tried to make the case that deliveries of LNG to Europe are not commercially viable. Those claims were dismissed by many people including Piotr Woźniak, the CEO of the Polish Oil and Gas Company. In several public statements he underscored that the adopted pricing formula pegged the prices of U.S. LNG supplies to those at the Henry Hub, making them around 20 to 30 percent cheaper than Russian gas flowing to Poland through the Yamal pipeline transiting Belarus.

Second, exploiting the “Opera Pricing” approach—the closer you sit, the more you pay. In fact, countries enjoying traditionally good political relations with Russia have been handed relatively low bills for their gas imports, whereas those having diverse political preferences have been paying a higher price. Today Ukraine is the case in point. While President Viktor Yanukovych was in power, Gazprom charged Ukraine with 268.5 billion cubic meters. Currently, Ukraine pays 485 USD/billion cubic meters, i.e. an increase of more than 80 percent.

Finally, including energy policy into Russia’s wider hybrid warfare portfolio. In the gas sphere, Russia relies on intimidating countries that are over-dependent on its fuel supplies with gas cuts being its chief instrument. Its activities in the power sector are marked by cyberattacks. Since 2014, Russia has converted Ukraine into a test-bed for its offensive cyber activities. Critical energy infrastructures became prime targets. Gaining control of electricity systems and nuclear power plants allowed hackers to stop electricity supplies in Ukraine. The methods tested in Ukraine are later replicated against Allied facilities. In early 2018, the United States accused Russia of engineering a series of cyberattacks on power plants and distribution grids on Allied territory in Europe and the United States.

What Can the International Community Do?

Russia’s coercive energy policy as well as readiness to use military force to protect energy critical infrastructure pose a serious risk for NATO, its allies and its partners. NATO is not—and will not be—an energy organization. Yet, energy developments can have significant political and security implications. Therefore, three elements should be taken into consideration by NATO and the closest partners of the Alliance.

First, give more prominence to energy security in political consultations at NATO. Those discussions should serve to raise awareness about Russia’s usage of energy as a tool of its foreign and security policies on its eastern and southern flank. The discussions should also help to debunk Russian myths and propaganda on energy security. A North Atlantic Council visit to one of the LNG terminals in the Baltic Sea region could be helpful in achieving both aims. Moreover, NATO should regularly consult Ukraine on matters related to energy security. This topic should be included in the works of the NATO-Ukraine Platform on Countering Hybrid Warfare.

Second, the international community should continue to enhance energy resilience. This is primarily the responsibility of national authorities. Yet, the protection of energy critical infrastructure is key for any NATO operations. Therefore, the current NATO strands of work on cyber, countering hybrid threats and building civil preparedness should include to a larger extent energy related elements. In the same spirit, NATO exercises should more frequently include energy security issues in their scenarios. This could be done in close cooperation with the NATO Energy Security Centre of Excellence based in Lithuania.

Third, the countries blocked under the Three Seas Initiative should work jointly with Ukraine and study the possibility of creating a regional gas hub fueled by gas produced locally supplemented with piped supplies from Norway and LNG deliveries from the United States. In fact, the EU internal gas market is to be based on a net of interconnected wholesale markets. Transitioning to a model of competitive, regional markets will require the development of necessary infrastructure such as grids and interconnectors. In that context, storage sites will be needed to ensure demand-response management in order to reduce the volatility of prices and increase supply security. Ukraine comes with a ready fix. The massive capacity of its storage sites emerges as a vital asset.

Julian Wieczorkiewicz is an expert in energy security. He currently works at the Permanent Delegation of the Republic of Poland to NATO. Prior to joining the Ministry of Foreign Affairs, he worked at the Centre for European Policy Studies, a leading Brussels-based think-thank, where he covered energy-related issues.

Dominik P. Jankowski is a political adviser and head of the political section at the Permanent Delegation of the Republic of Poland to NATO.

The authors’ views and opinions expressed do not necessarily reflect the official positions of the institution they represent.