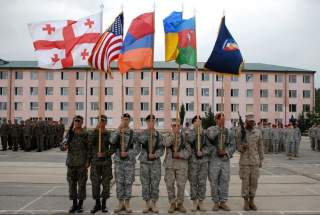 This year’s Warsaw Summit in July focuses on stability beyond “our borders.” The notion of stability is straightforward. Euro-Atlantic partners want to contain the dangers emerging from failed states on the periphery of Europe and seek the means to address “traditional” security concerns. In trying to encapsulate these challenges in a manner that is “diplomatic,” there is often a tendency to resort to historical analogies with the Cold War.

That is wrong. A comparison with the interwar period is much more fitting.

Russia has nothing to do with the USSR, because at the time Moscow offered an alternative paradigm of governance. Now Russia is an expression of anti-liberal fear, becoming the worst reflection of failure in liberal societies. Moscow treats much of the Russian territories as “near abroad,” exercising suzerainty rather than sovereignty, ruling indirectly through strongmen that can guarantee loyalty.

Like the interwar period, Russia has no rule of law, although there is no question about might being right. The Kremlin did not manage to hold on to checks and there were never quite any balances. Everything rests on divide and rule, plus patronage, not unlike Tsarist politics. In Russia’s mind, the South Caucasus should be no different than the North. And this neo-classical imperialist regime offers no alternative road to modernity, an ideological paradigm, or an economic model. Russia is a threat, not a proposal.

As in the interwar period there is a friction between strategic blueprints and diplomacy. Like then, it is increasingly hard to tell whether political language is being “securitized” or the military is being “politicized.” Clemenceau’s dictum that “war is too important a matter to be left to the military” is timely. Today, generals must be attuned to the perplexities of politics; politicians must learn to master logistical detail. Ultimately, what is important is to retain a balance between security and freedom, the primacy of political objectives over policy means.

The integration of land, air, sea, cyber, and space threatens to blur the role of traditional military and civic actors. The issue at hand is no longer “asymmetrical tactics” and the ability to fight by proxy through little green men militias. That was already an emerging feature of warfare in the 1990s. The challenges now are “asymmetrical strategies” that blend cyberspace and political communication, party funding and troll factories, digital infrastructure and mega data to attack “a social contract.”

From a conventional security perspective, any war ravaged zone today becomes a land of opportunity from which crowdfunding campaigns can be launched globally, natural resources that can be captured, and civilians that can be kept hostages pending the inflow of humanitarian aid. “Brand terrorism” spreads quickly and makes its eradication a matter of ideological and political confrontation, as much as a matter of military might. If anything, making peace is harder when the opponent is not a state.

That is why Europe needs to stand by states that work. Georgia is one of the few examples where a lot of things go well at the same time. We are no longer important merely for where we are, but also for what we have become. After billions of dollars in investment, capacity building, institution building, reform programs, roadmaps, evaluations, assessments and reforms Georgia has not been “reformed.” Georgia is transformed, which is still an ongoing and open-ended process, but the foundations have now been laid.

We have moved away from democratic “transition” to consolidation. There is a government and an opposition. Elections are held that can be lost. This is one of the most transparent countries in Europe and one of the most business-friendly environments in the world. And this is one of the leading states in freedom of speech and the internet in Eastern Europe. Georgia has 90 percent electricity sourced from green energy and is seeing an unprecedented surge in foreign direct investment. The prison population has been halved. The economy is increasingly being diversified, our credit ratings are upgraded, and growth is solid. Society is acquiring a taste for education and culture that is reminiscent of much better times in the Caucasus, when post-Soviet was as meaningless as it is now.

Holding on to all that is what is at stake in Warsaw, for Georgians, but also for Europe. The road to Warsaw is not a virile narrative of confrontation with Russia. It is clear that the alliance has the cyberspace, conventional, and missile supremacy to deter. Regional balances differ, but the resolve of the alliance to prove it is a community will be put to the test.

The first signal came with the accession of Montenegro, which the alliance must see through. And so the door remains open for Georgia that is still a member of “the community” even if not a member of NATO—a status of “membership minus” in which Article 5 cannot be invoked. Until that happens, there is little doubt that Georgia is as much a part of this Euro-Atlantic community as Sweden and Finland. In Warsaw the question will not be who is committed. The time to discuss loyalty has come and gone.

That is the question of historical significance, which is unique and beyond analogies. In many ways, the history of Europe since 1945 and again since 1991 is to create an unprecedented level of linkage, interdependence, cohesion, and solidarity. We make “authentic choices” even as we hold on to history as a companion.