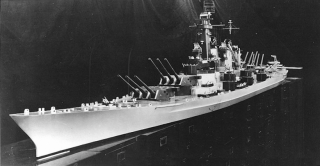 America’s Iowa-class battleships, some of the last battleships ever produced, were also the most powerful. Equipped with nine 16-inch guns, they were floating arsenals capable of duking it out—and winning—against any other ship of their kind. The ships were so powerful they were reactivated in the 1980s, refitted to do battle against the Soviet Union.

As powerful as they were, the Iowas would have been dwarfed by an even larger class—the monster battleships of the Montana class. How would the Montanas, which were tragically never built, have fared against Germany’s greatest battleship, the Bismarck?

The Montanas were to be sailing superlatives. At 921 feet long, they would be longer than the Iowas, and longer than the Essex-class fleet of aircraft carriers by a hundred feet. This class of super battleships was projected to displace seventy thousand tons fully loaded, outweighing the Iowas by the displacement of an entire U.S. heavy cruiser—plus three destroyers thrown in for good measure. They would be so large they were to have been the first American warships unable to transit the Panama Canal. This inability to quickly transit from the Atlantic to the Pacific was likely part of the reason a force of five battleships was envisioned.

The Montana battleships were also much more heavily armored. They were to have sixteen inches’ steel armor at the belt, a third more than their predecessors. Turret armor was increased from a generous sixteen inches to nineteen. Bulkhead armor went from eleven inches to eighteen, increasing their ability overall to absorb and restrict damage.

Each battlewagon would have had twelve 16-inch guns, three more than the Iowa class and two more than the Royal Navy’s King George V class of battleships. The Montanas were to mount the same guns as the Iowas—sixteen-inch diameter Mark 7 guns with a length of fifty calibers, making each sixty-six feet long from breech to muzzle. They would also fire the same shells, particularly a 2,700-pound armor-piercing shell that penetrated twenty inches of steel plate at 11.36 miles.

The ships bristled with armament. In addition to the primary batteries they had twenty 5-inch dual-purpose guns, as many as four Fletcher-class destroyers. Antiaircraft armament included up to forty 40-millimeter guns and fifty-six 20-millimeter guns, a remarkable number considering the threat of air power against large combatants was not yet proven in battle.

The Montanas could punch harder, shrug off more blows and sail farther than the Iowas. Perhaps the only category they were inferior in was speed, with a projected speed of 28 versus 32.5 knots.

The Bismarck class was the apex—and the end—of German battleship development. Construction began started in 1936, shortly after Hitler had wrangled concessions out of England on the size and composition of the German fleet. Bismarck would be commissioned in April 1940 and was sunk just thirteen months later.

Bismarck and her sister ship Tirpitz were 821 feet long and displaced up to fifty thousand tons, making them up to fifty percent larger than the largest German World War I battleships, the Bayern class. Bismarck’s twelve Wagner boilers drove three turbines, making her capable of steaming at just over thirty knots.

In a hypothetical battle, which battleship would win? The Montana is the clear winner in armament, having one-third more main guns, more powerful main guns and better radar fire control. In a slugging match, the American ship could get more rounds off more accurately, increasing the chances it could seriously damage the German battleship first.

The American super battleships were also more heavily armored; while the Bismarck could theoretically penetrate a Montana’s main armor belt at eleven miles, the latter’s gun turrets were practically invulnerable to German fire at all ranges. Eighteen inches of bulkhead armor meant that a Montana could better contain damage. The Bismarck’s armor, on the other hand, was woefully insufficient to stop and contain damage from the Montana’s twelve big guns.