A Necessary Litmus Test Every Democratic Presidential Candidate Should Take 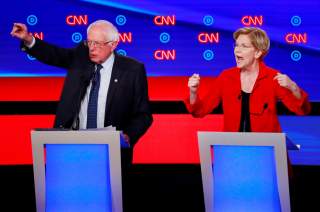 The Left has set several litmus tests for presidential candidates, to help sort the true progressives from the moderate liberals. These include commitments to the Green New Deal, Medicare-for-All, impeachment, and, for some, the abolition of the Electoral College, and expansion of the Supreme Court. The time has come for the moderates to reciprocate by providing the Left with some tests to separate the Hard Left from the rest.

The candidates, who are leaning to the left, could be asked a simple question. Do they agree that, although the United States is deeply flawed, America is not defined by its flaws but is basically a good society, with a robust set of liberal institutions? Or, is America inherently, structurally, a society dominated by racism, jingoism, chauvinism, and homophobia? Is America society that must be rebuilt, from the ground up, on new foundations?

Patriotism, de Gaulle stated, is the love of country. Is the Hard Left patriotic?

Another test is which view of American history the candidate considers the truer one. Does the main arc of U.S. history bend toward justice—is it a narrative of ever-growing rights, first for those whites that did not own property, then for women, then for African Americans, next for gay people? None received their due, but all are in a vastly better place than they were centuries, generations, and even decades ago. Or, are racism, chauvinism, and other forms of prejudice so deeply ingrained in American values and institutions that all we see, over the ages, are changes in window dressings but very little true change? Indeed, racism, for example, has become more insidious, but no less biting.

And one ought to ask: are there enemies to the left of the Left, public figures the Left are willing to disassociate themselves from because they are too unpatriotic? Americans ask, nay, demand—quite appropriately—that the Republicans condemn David Duke, write off Judge Roy Moore, and ostracize the Alt-Right. What about the other end of the spectrum? What about those in Antifa who argue that right-wing speakers are Nazis and hence their speech may be disturbed and that they and their followers may be punched? Or what about Louis Farrakhan’s homophobia and antisemitism, or a rapper who calls for killing all whites?

Finally, President Barack Obama was fond of repeating that “We have never been just a collection of individuals or a collection of Red States and Blue States: we are, and always will be, the United States of America.” Does the candidate hold that we should write off the supporters of Trump, define them as deplorable, red necks, white trash? Or do the candidates see them as good people who are misled by Fox News and company—brothers and sisters who must be included in the great American community that badly needs to be shored up?

Amitai Etzioni is a University Professor and Professor of International Affairs at The George Washington University. His next book, Reclaiming Patriotism, will be published by University of Virginia Press this summer.