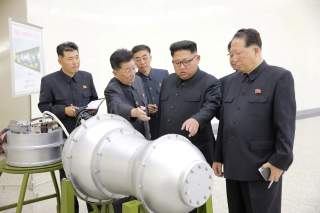 At the Pyongyang summit between North Korean leader Kim Jong-un and South Korean President Moon Jae-in, held from September 18–20, 2018, a declaration was signed by the ranking military officials of the two Koreas. This agreement is intended to prevent military confrontation on the Korean Peninsula, specifically it establishes buffer zones, based on the Military Demarcation Line (MDL) on land, and on the Northern Limit Line (NLL) at sea. Optimists see the agreement as a useful step toward better relations; but pessimists see it as a step too far, given the continuing military tensions on the Korean Peninsula. A balanced appraisal suggests that it is too soon to decide.

The Background to the Agreement

Longstanding tensions. For decades, the Korean Peninsula has remained technically at war, and Koreans have endured recurring military confrontations, with the terrifying prospect of these hostilities escalating into full-scale war. Recent developments have brought hope to all Koreans that the times may finally be changing. Nevertheless, President Moon’s visit to Pyongyang on September 18–20, 2018, to attend a third summit with Kim Jong-un, just two months after the previous one, was remarkable, given the slow progress on North Korean denuclearization. Despite the suspension of ROK-U.S. Combined Military Exercises. To date, North Korea has offered little in return. But this is exactly why the two Koreas need to be working together to break the stalemate.

Whither Denuclearization? The North Koreans have made some efforts, but are still a very long way from the U.S. requirement for “complete, verifiable, and irreversible” denuclearization. Indeed, the North has yet to take the first essential step towards this, by providing a comprehensive inventory of their stockpiled nukes and missiles together with the locations of all their nuclear facilities. If the North Koreans want the United States to believe that they are serious about denuclearization, then they will have to do far more to demonstrate their sincerity.

Since the U.S.-DPRK Singapore summit in June, there is evidence that North Korea has continued to work on increasing its stockpiles, by enriching uranium and by building ballistic missiles in secret factories near Pyongyang. Some commentators are therefore skeptical about North Korea’s intentions, arguing that North Korea is, and will remain, a de facto nuclear-armed state. For example, Pakistan possesses strategic nuclear missiles, uncomfortably for some Western powers, but the situation is tacitly accepted, so perhaps the best that can be achieved with North Korea is a freeze upon further development of its missiles and nukes, and possibly some quantitative reductions.

The South Korean Economy. Growth remains sluggish, and Moon sees huge potential to transform the South Korean economy by utilizing the pool of cheap, well-educated North Korean labor. There are outstanding investment opportunities, especially for assembly factories, and North Korea is also a big new market. The resulting boost to the South Korean economy should also reduce youth unemployment, which is a serious social problem. Conspicuously, Moon was accompanied to the latest summit by a large group of business South Korean leaders, who are rumored to have struck some important deals.

President Moon as honest broker. Despite the negligible progress on denuclearization, both the North and South Korean leaders are strongly motivated to continue to improve ties between them, and in this they both have the enthusiastic support of their people. Expect, therefore, to see further North-South summits, with President Moon trying to square the circle of denuclearization ambiguities, representing himself as an honest broker who can chip away at the stalemate between the United States and the DPRK, and also deliver an End of War Declaration to satisfy Kim Jong-un.

Details of the 9/19 Military Agreement

Both Koreas have made notable concessions affecting their current combat readiness in all three battlespaces: land, sea and air. They have committed to establishing so-called peace zones, near the NLL and the MDL, without any military withdrawals or redeployment of troops from either side. Within these new buffer zones, live-fire artillery drills, major maneuvers, and new weapons will not be permitted; there will also be no-fly zones, including for UAVs, and joint fishing areas crossing the NLL. The existing Demilitarized Zone (DMZ) is two kilometers on either side of the MDL; the new buffer zones will extend to five kilometers. The peace areas based on the NLL will reach 135 kilometers. Near the DMZ, the no-fly zone for helicopters will be ten kilometers, for UAVs fifteen kilometers, and for fixed-wing aircraft twenty kilometers on the eastern and forty kilometers on the western frontlines.

Several previously agreed measures will also be implemented or reactivated, including: establishing a Joint North-South Military Committee, membership to be determined according to the Basic Agreement of 1991; connecting high-level hotlines as agreed in the Joint Statement of 1974; disarming security guards in the Joint Security Areas, and allowing mutual use of the Han River Estuary, in accordance with the Armistice Agreement signed of 1953. Both sides will also withdraw a number of guard posts, and the two Koreas will work together to recover human remains and clear landmines near to the DMZ.

Reaction to the 9/19 Military Agreement

Conservative opinion in South Korea has criticized the agreement for several reasons. Some, who are stuck in a Cold War mentality, believe that North Korea is still planning a military invasion of the South, so that the agreement is mere subterfuge. Others complain that it unfairly treats North and South on equal terms, as if the history of lethal military provocations by the North is somehow equivalent to the verbal hostility sometimes expressed by the South, and that both are equally guilty of escalating military tensions. Another objection concerns the future of the longstanding U.S.-ROK alliance: Pyongyang has always sought to drive a wedge between Seoul and Washington, and right now there is a huge gap between U.S. and South Korean perceptions of North Korean intentions. The United States is only interested in rapid denuclearization, whereas South Korea has focused on trust-building measures, and many ordinary people view the North with tolerant goodwill. So is the whole process a trap set by North Korea with the ultimate goal the withdrawal of U.S. Forces from the Korean Peninsula?

Many within the military establishment believe that the threat from North Korea is unchanged: they see the 9/19 Military Agreement as unnecessary and dangerous, conceding too much to North Korea and undermining South Korea’s national security. One crucial issue concerns the inspections which will form an essential part of implementing the 9/19 Military Agreement; unfortunately the United States may not get on side with such requirements. It was a shock for President Moon’s government when U.S. General Vincent Brooks refused to give the South Korean military permission to enter the DMZ to prepare for working-level inspections of the long-neglected North Korean railways. But any inspection that involves USFK facilities and deployments will likely be completely out of the question, and some will then argue that the ROK-U.S. alliance has now begun to obstruct peace on the Korean Peninsula.

Many other issues will impact the implementation of the agreement: how to achieve North Korean denuclearization; when to transfer wartime operational control to South Korea from USFK; how to secure civilian control of the military, in response to the changing political and social circumstances in South Korea; how to proceed with conventional arms reductions between the two Koreas, taking into account comparative GDP, population, economic structure, and future threat perceptions; and of course the geopolitical context cannot be overlooked—the Korean peace initiative will need to be supported, or at least not opposed, by China, Russia and Japan.

But support is most needed, of course, from the United States. The progress already made between North and South Korea on limiting the buildup of conventional arms is running far ahead of the U.S.-DPRK process of denuclearization. President Moon wants to emphasize the importance of continuing negotiations between the United States and North Korea, rather than relying on the “maximum pressure” strategy of enforcing sanctions.

If Kim Jong-un is sincere in wanting to transform North Korea, then the United States and South Korea should do everything they can to help him. Both the suspension of ROK-U.S. combined military exercises and the extension of the buffer zones between two Koreas are useful, in that they provide reassurance to the North Korean regime, and to its people, that neither the United States nor the South need be feared any longer. South Korea wants to see signals from North Korea that it is evolving into a more normal state, with a normal kind of leadership. Helping the North to feed its people and provide them with a better standard of living is not about saving Kim’s face, it is an essential part of the normalization process. Yes, social and political freedoms are also essential, but they will not come tomorrow.

The basic agreements that have been signed between North and South Korea need to be fully implemented. Denuclearization needs to be negotiated with tolerance and patience, and the process cannot be hurried. Improvements in North-South interactions should be treated as a separate process, with its own timescale, and not held hostage to progress on denuclearization. The 9/19 Military Agreement between the two Koreas should not become entangled with the U.S. determination to achieve denuclearization, still less with U.S. domestic politics.