Neither Candidate Challenged the Establishment 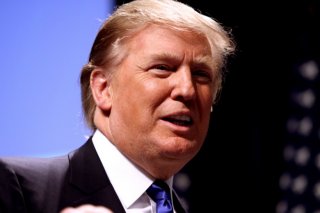 The news cycle is obsessing over who won. The general consensus is that Donald Trump fought to a tie in the first 30 minutes and Secretary Hillary Clinton won the last hour of the debate. Who knows how the polls will react over the coming week, but one thing should be clear from last night: America lost. Overall, Trump scored points on trade; Clinton scored on national security, but mostly voters were left gasping for oxygen in a stagnant pond of policy nothingness.

Last night's debate began promisingly from a civility perspective. Though the trade policies of both candidates are built off of daft protectionist talking points, the candidates kept the discussion to policy. Her delivery surprised on the upside of in terms of liveliness, and his surprised on policy.

Then we got to the bad puns and poor command of facts. Clinton: "Trumped up trickle down economics." Trump: China is using our country as a "piggy bank" to rebuild their country. Clinton: conservative economics and deregulation caused the housing crisis. Trump: President Obama doubled the national debt.

Of course, Trump correctly raised that last point. Obama did blow through about $10 trillion in debt. Of course, left unmentioned by both Clinton and Trump is the fact that the man who signed every one of Obama's checks, House Speaker John Boehner, is a Trump fan.

Then the fibs got loud, and the candidates began jabbing one another with lies. Trump denied Clinton's claim that he had asserted climate change was a Chinese invention (ahem), and Clinton asserted that she had never called the Trans-Pacific Partnership the "Gold Standard" of trade deals (ahem)

Then we moved on to the issues of race and birtherism.

Skipping ahead, we finally, we go to national security. By this point, both candidates were hot and bothered, particularly Trump, and much of what we heard from both candidates came filtered through a populist lens.

As a topic, Russia came up first. Interestingly, Clinton did not threaten Russian President Vladimir Putin for interfering in our elections. Rather she warned him. Trump said that we do not know the interference comes from Russia; for all we know it could be "a 400 lb blogger on a bed."  Translation: expect another Russian reset regardless of who wins.

And what began as a useful conversation about ISIS ended with Clinton taking a victory lap for killing bin Laden, and Trump declaring that he would "take their oil."  What we missed was a serious discussion of radical Islamic Ideology. Clinton said she wanted to make an animating principle of her administration to kill Abu Bakr al-Baghdadi, the leader of ISIS. Surely she knows that killing Bin Laden did not stop Al Qaida nor Al-Qaida in Iraq. ISIS did not suffer defeat when U.S. forces killed its leader, Abu Musab al-Zarqawi in 2006.

Regardless, stopping the terrorist threat will not come by way of an endless game of high-tech drone whack-a-mole, something we have been at since the fall of 2001. We need to combat the ideology of political Islam.

On Iraq, Trump made valid points that the Obama/Clinton troop withdrawal left a vacuum, from which arose ISIS. Astonishingly, Clinton brushed off the withdrawal as the early Obama administration simply following a policy that the Bush administration had set in motion.  Placing Obama’s signature first term foreign policy on his predecessor requires considerable chutzpah.

Instead of tugging at that yarn we quickly moved to the irrelevant question of who supported the Iraq invasion thirteen years ago. In place of that pointless argument, the country needs a real discussion about what our national security apparatus could have achieved. This was the critical question that the Bush administration did not answer.

In 2003, some asserted that Muslim societies were not ready for democracy. Secretary Powell wanted to fix Iraq if we broke it. Others wanted to invade and leave, etc. What won the day was nation building, of course. But in none of those cases did the Bush administration adequately think through what the government’s actual capabilities meant for that goal. This is fundamental stuff. Does the government have the capabilities to achieve your objective?

We should shudder when our two candidates for president seem not to understand this and, instead, prefer to wallow in the same tired argument that has bedeviled the establishment since 2003. We face 2016, not 2003 problems. Not to mention, the past sixteen years have proved without a shadow of a doubt that our counter-terrorism strategy is ineffective.

So, perhaps Clinton won the debate, but, more importantly, neither candidate challenged the establishment. As a result, America lost.