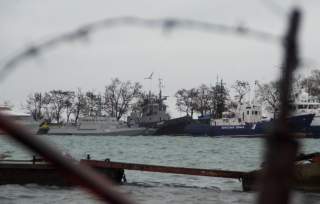 A naval clash between Russia and Ukraine in the Kerch Strait was bound to happen sooner or later. Recent months have witnessed the militarization of the Sea of Azov, which the strait links to the Black Sea, as Russia seeks to dominate the body of water it shares with Ukraine and the latter resists. Russian forces have harassed Ukrainian ships, as have the Ukrainians Russian vessels, albeit to a much lesser degree. Moreover, the Russians are paranoid about potential threats to the Crimean Bridge, the sole, strategic link across the strait between Crimea and the Russian mainland that was opened to traffic this past spring. In these circumstances, it doesn’t take much to spark a conflict.

We do not know in important detail what took place in and around the strait on November 25. Not surprisingly, we have diametrically opposed Russian and Ukrainian narratives, with the only common point that the incident was premeditated. The Russians speak of a Ukrainian provocation to challenge Russian sovereignty in Crimea and elicit further Western pressure on Russia, with some adding that it was all orchestrated by the deep state in Washington. The Ukrainians see Russian aggressive, imperialist designs to deny Ukraine’s right of innocent passage through the strait to ports on the Sea of Azov, part of a larger effort to reinforce Russia’s control of Crimea, all timed to a moment when Western countries are distracted by domestic controversies, such as the violent protests in Paris and the impending critical vote on Brexit in Britain.

The reality—if anyone cares to discover it—may turn out to be more prosaic, a case of local decisions made in the context of miscommunications and based on worst case thinking. Just a couple of months ago, Ukrainian naval vessels followed a similar route through the strait without incident. But in an atmosphere where each eschews anything that might prejudice its claim to sovereignty over Crimea, it is not difficult to imagine Ukrainian ship captains and Russian border force commanders misreading actions or lack of responses to communications as deliberate attempts by the other side to do harm to legal claims or physical structures, such as the Crimean Bridge.

Despite the mutual denunciations, neither side has an interest in escalation. The Ukrainians know they cannot stand up to the full might of the Russian military, particularly since they would have to stand alone. Neither the United States nor any European country, despite expressions of outrage, is prepared to enter armed conflict on the Ukrainian side. The Russians meanwhile have nothing to gain by a direct military confrontation with Kyiv when they are slowly achieving their strategic aims through constant low-level pressure that rarely provokes Western notice, let alone a response. Both sides will, however, play up the incident to the hilt for domestic political purposes.

Ukrainian president Petro Poroshenko undoubtedly sees the incident as a godsend that could lend a spark to his flagging reelection campaign. With the election set for next March, he is running well behind his chief nemesis, former prime minister Yulia Timoshenko, in public opinion polls. Because the economy is faltering, and Ukraine remains in the thrall of an oligarch-clan system, which the Maiden Revolution of Dignity that brought him to power sought to overthrow, Poroshenko is understandably running on his patriotic defense of Ukraine under the slogan “Army! Language! Faith!” There is no better way to polish his patriotic credentials than to act tough in the face of Russian aggression (although his mishandling of the declaration of martial law suggests he could bungle this opportunity).

Meanwhile, Vladimir Putin could also benefit from a show of great-power bravado. Although he is hardly in the same dire position as Poroshenko, his approval rating has collapsed by some twenty points since he decided to push through widely unpopular pension reform this past summer. Vigorously defending Russian territory, which Russians overwhelmingly consider Crimea to be, and standing defiant in the face of further Western sanctions will undoubtedly buoy his support, at least in the short run.

Beyond these domestic considerations, bigger geopolitical issues are in play. Kyiv has long been concerned with combating Ukraine fatigue in the West. In my meetings last month in Kyiv, senior Ukrainian officials insisted that, in fighting Russian aggression in the “heart of Europe,” Ukraine was fighting Europe’s battle and therefore deserving of more robust support, including stepped up military assistance and diplomatic backing, as well as crushing anti-Russian sanctions. They were disturbed by the growing chorus of voices in Europe calling for normalization of relations with Russia, which they were convinced could only come at Ukraine’s expense. The Kerch incident has now refocused the West’s attention on Ukraine for at least a moment, which Kyiv will want to extend for as long as possible.

For Putin, the incident has already derailed his meeting with Trump on the margins of the G-20 summit in Buenos Aires this weekend—should Trump not reverse his decision abruptly tweeted out while he was flying to the summit. Coming after the cancellation of the planned meeting in Paris earlier this month, this is a major setback for Putin’s effort to stabilize relations with Washington. The damage could be limited if Trump’s and Putin’s teams meet and work from the agreed agenda absent the presidents. Whether the two presidents can agree on an early date for a summit remains to be seen.

How all these factors will play out—and what the consequences of the Kerch crisis will be for Russia’s relations with Ukraine and the West—remains to be seen. But even now this incident should cause the West to reconsider its approach to the Ukraine crisis. Up to this point, the West has operated on the assumption that the dispute over Crimea, with the competing claims of sovereignty, would not prove ripe for resolution until long into the future and that efforts should therefore be focused on resolving the seemingly more tractable conflict in the Donbas. That was always an illusion. From the beginning, Moscow has implicitly linked the two issues—a settlement in the Donbas should come with Western recognition of Russian sovereignty over Crimea. Moreover, the Ukrainian issue—the question of Ukraine’s geopolitical orientation—in Moscow’s mind is part and parcel of the larger issue of European security architecture. It has sought to engage the West on that issue since the breakup of the Soviet Union without notable success. That failure lies at the heart of Putin’s deepening disaffection with the United States, as he made clear in his infamous remarks at the Munich Security Conference in 2007.

The Kerch incident underscores the imperative of dealing with the Crimean issue head on. Even if the issue of Donbas were miraculously resolved, Crimea would remain a chronic source of tension with a high risk of dangerous incidents between Russia and Ukraine. Maintaining an open maritime route through the Kerch Strait between Ukrainian ports on the Black Sea and the Sea of Azov is critical to Ukraine’s security and economic development. Kyiv will be repeatedly tempted to test Russian resolve to defend its interests in waters that Kyiv believes are rightly its own in and around Crimea, as well as to remind the West that Crimea is sovereign Ukrainian territory unlawfully seized by Moscow. Russia will also be just as ardent in defending its claim to Crimea against Ukrainian intrusion and Western objections.

To be sure, there is no easy solution to the Crimea dispute, but creative diplomacy has resolved no less vexing issues in the past, such as the status of Taiwan or Russia’s right of access to Kaliningrad through Lithuanian territory. But what should be clear is that there will be no resolution of the Donbas conflict without progress on Crimea, and both of those matters ultimately need to be discussed in the context of Europe’s future security architecture. In short, the West needs to engage Russian on all three issues simultaneously. That does not mean that all three must be resolved simultaneously. It does mean that none can be resolved in isolation from the others.