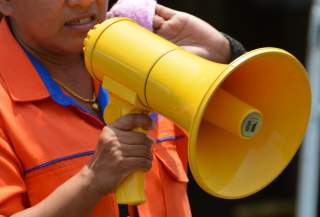 On Tuesday, Bloomberg’s Eli Lake published an article called, “Koch Brothers Give a Megaphone to the Anti-Israel Fringe.” In it, he wrote that an event organized by the Charles Koch Institute featured a number of speakers that he deemed disreputable and unfit for polite society. Although Lake never directly accuses his targets of being anti-Semites, he refers to them as belonging to “the uglier fringes that blame Israel and its supporters for hijacking U.S. foreign policy.” Based on Lake’s description, one would think that the Charles Koch Institute had invited David Duke or someone from the Iranian Revolutionary Guards to headline its conference. However, as Lake later reveals, the supposedly scandalous speakers are scholars John Mearsheimer and Stephen Walt, as well as former U.S. Ambassador to Saudi Arabia Charles Freeman Jr.

As a freshman at Johns Hopkins University, I should state upfront that Walt’s and Mearsheimer’s works have been assigned as essential reading—and that I’ve profited from studying them. I’m not sure that I agree with everything they write, but presumably their books were assigned by my professors, not because the authors are fringe figures, but the reverse: they are prominent academics who have something important to convey.

It is true that these three men, particularly Freeman, have been critical of the U.S.-Israel relationship. However, their criticism has nothing to do with anti-Semitism, and no serious evidence has been provided to suggest that any of them are anti-Semites. Criticism is not synonymous with hostility. Quite the contrary. In fact, all three have consistently stated they believe in Israel’s right to exist and be secure.

Still, reasonable people may disagree about whether they go far enough in supporting the Jewish state. There is also reasonable debate over Walt’s and Mearsheimer’s view on the influence of the Israeli lobby, which some of their critics have suggested displays a less than nuanced view of how decisions in Washington are made. One may not agree with these three men, but to depict them as pernicious extremists cannot be described as anything else than a hatchet job. Furthermore, to suggest that these three peoples, two of which are among America’s leading international relations scholars and the third who is a highly accomplished former diplomat, should be excluded from a conversation about U.S. foreign policy tells less about their views--and more about Lake’s.

What is truly remarkable about this article from Lake is how starkly it differs from one he wrote just last November. The subject at hand then was a statement put out by several staff members of the Center for American Progress, which criticized their organization’s decision to host Israeli Prime Minister Netanyahu. Lake was quick to condemn the dissenters, scornfully denouncing the move as being exemplary of a “cry bully culture” pioneered by college campus radicals, one that calls for “all dissenting views be excised from the discourse for the safety and well-being of the aggrieved.”

Needless to say, this lamentation over the growing prevalence of political correctness seems at odds with his later excoriation of the Charles Koch Institute for hosting Mearsheimer, Freeman Jr, and Walt. In his earlier piece, Lake portrays those who object to Netanyahu being given a platform to speak as timorous and close-minded. That was then. Six months later, Lake is ventilating his outrage at the Charles Koch Institute for inviting distinguished academics and former government to present their views on U.S. foreign policy. In short, his stance can be described as “free speech for me, but not for you.”

There is admittedly a major difference in these two cases, one that is not in Lake’s favor. When it comes to the opposition within the Center for American Progress to Netanyahu’s speech, it was based not just on Netanyahu’s rhetoric, but also his actions as a head of state. In particular, these staff members took issue with Israel’s military operation in the Gaza strip during the summer of 2014. By contrast, Lake’s desire to discredit Mearsheimer, Freeman Jr, and Walt is driven solely by their critical comments on Israel. To the objective bystander, there little room to doubt which of these cases is a better indicator of “cry bully culture.”

While Eli Lake’s double standard on open debate is not newsworthy by itself, it does merit attention because of how it highlights the larger neoconservative hypocrisy on the subject. Although Lake and other neoconservatives are quick to pounce on college kids who demand safe spaces from alternative viewpoints, they are no less petulant when confronted with differing opinions. Like campus radicals, neoconservatives dismiss their opponents as morally and intellectually deficient hacks, unworthy of having their perspectives taken seriously.

From this shaky and self-congratulatory premise, they go on to question the moral motives of any institution trying to foster discourse on pressing difficult and issues. Since they consider certain views self-evidently depraved, a number of neoconservatives reason that the only explanation behind an institution providing a platform for these views is that it implicitly endorses them. That there is value in hearing from leading academics and former government officials about their field of expertise seems not to register with them. Indeed, it seems that neoconservatives are only interested in intellectual discourse when their speakers are the ones whose legitimacy to participate is questioned. With that one exception, neoconservatives are more than content to forgo the virtues of intellectual exchange for Manichean sermonizing.

At some point, neocons should ask themselves whether they are truly committed to promoting freedom at home and abroad. If the answer is a resounding yes, then they can no longer vacillate between lauding free speech one moment and endorsing suppression of it the next. How can anyone take seriously proponents of freedom of speech who seek to rally an online angry mob against organizations that give individuals with different views an opportunity to state their case? At a time when neoconservatism is struggling in the court of public opinion, the last thing it needs is further damage to its credibility.

Dimitri Alexander Simes is a student at Johns Hopkins University.

Image: A man with a megaphone. tarimakasih0/pixabay. Public domain.