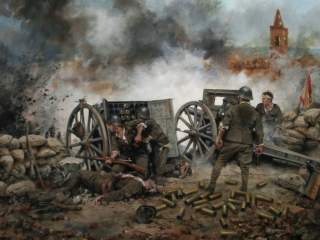 Sometimes when the very old die, it baffles the mind to recall how their lives spanned contrasting ages. Harriet Tubman, whose visage we now know will grace our legal tender, lived until the year after the sinking of the Titanic. Madame Chiang’s life touched three centuries, and that old curmudgeon George Kennan survived long enough to see the advent of the flip phone. So when Del Berg, the last remaining American veteran of the Spanish Civil War’s Abraham Lincoln Brigade, died in March at the age of one hundred, John McCain found cause for graciousness, writing in the New York Times of Berg and his comrades-in-arms, “[They] believed they were freedom fighters first, sacrificing life and limb in a country they knew little about. . . . You might consider them romantics, fighting in a doomed cause for something greater than their self-interest.”

One can almost picture McCain trying to sneak mention of “Iraq” past the Times opinion editor, for there has been a long-standing fascination among neoconservatives with the Spanish Civil War and its bunting of moral absolutism. This, for instance, was not the first time McCain has paid his own version of homage to the Catalonia that Berg knew so well. The title of his book Worth the Fighting For is cribbed from the last words uttered by Robert Jordan, Hemingway’s iron-ribbed protagonist in For Whom the Bell Tolls, and reminiscent of those put to paper by George Orwell after disembarking at Barcelona: “I recognized it immediately as a state of affairs worth fighting for.” His friend and Senate colleague, Joseph Lieberman, went further in remarks at the American Enterprise Institute, telling the neocon mothership in 2007 (while sharing the dais with a nodding McCain) that Zarqawi and Al Qaeda in Mesopotamia should be viewed in the same ominous light as the fascist flare of forewarning sent up from capsizing 1930s Spain.

This cut-and-paste mentality is by no means limited to neocon politicos. Usual suspects like the Weekly Standard and unexpected platforms such as the Atlantic at times featured journalists arguing that the sacrosanct memory of the Jordans and Bergs should have spurred the West to action in Iraq sometime yesterday. Writing on the fifth anniversary of 9/11, Stephen Schwartz headily declared: “In Iraq, unlike in Spain, the United States, almost alone but for Britain, has undertaken the heavy burden of leading the world’s democratic faithful against the acolytes of terror.” From beyond the grave, Christopher Hitchens left us, in one of his many jeremiads against the antiwar movement, a reminder of the past Iberian glories of a more pugilistic left: “This episode of heroism and betrayal is remarkable for one thing above all: it represents the only time in modern history that American radicals were in favor of, or had a direct hand in, any ‘foreign entanglement.’”

Today’s current hang-up takes us across the now nonexistent Sykes-Picot Line to Syria. In a 2012 write-up in the Guardian, British journalist Nick Cohen spoon-fed his readers the usual pablum regarding the culpability of Western powers choosing to sit on their laurels while evil is allowed to fester, clearly denoting a Spanish/Syrian parallel. Michael Petrou of Maclean’s and Barry Rubin of the Jerusalem Post both took the analogy one step further, casting Iran in the role of looming despotic power in the vein of Hitler and Mussolini to play opposite Assad’s Francisco Franco. And just in case ISIS was feeling left out of the comparison game, British shadow foreign secretary Hilary Benn (himself not a neocon, but decidedly a stakeholder in the Blairite interventionist tradition of Labour Party politics), calling in the House of Commons for air strikes against Raqqa in the aftermath of November’s Paris attacks, summoned to mind the image of British internationalists, Orwell among them, rushing to join the Spanish fray.

This sense of moral certainty and high praise for the “Lincolns” and others belies a heavy irony: many, if not most, of the volunteers who enlisted to serve Spain’s Republicans were of a pro-communist persuasion, funded and trained by contacts within the Comintern, and defending a Spanish Republic whose government was comprised of leftists and radicals. Berg himself, as McCain candidly admits in his tribute, eventually went home to a long life of stonemasonry and Marxist politicking. So for modern neoconservatism—born in the Cold War–era Senate office of Scoop Jackson and suckled in the pages of Commentary—to find itself lionizing these earlier Reds is indicative of a sea change away from an instinctive fear of communism to knee-jerk concerns about Islamism.

This much we have known for some time. But, in their typical one-size-fits-all approach to questions of war and peace, neocon politicians and writers have misapplied a possible comparison to be made between pre-Surge Iraq and late 1930s Spain by proceeding to make a hash of it in their ramblings on Syria.

Much like Iraq (and indeed, Syria), Spain on the verge of Franco was not so much a nation-state as a country of many nations. This ramshackle condominium housed disparate peoples whose shared interest remained historical loyalty to the crown, but who chafed as a burgeoning generation of Spanish thinkers and politicians—perhaps wishing to emulate the broad-brushed nationalisms in vogue elsewhere in Europe—sought to make Castilian Spanish language and culture representative of all of Spain. Thus, when the drop curtain of the Bourbon monarchy came crashing down in 1931, Spain could have been rendered effectively balkanized (and indeed, it was for a time: localized governance abounded on Spain’s ethnic periphery for the first few years of the Republic). Yet the overarching threat of El Caudillo was enough to bind Basque, Catalan and anti-fascist Castilian in common cause, at least until the strongman’s victory became inevitable.

Akin to this is the situation in Iraq circa 2007, with a majoritarian Shia government disinclined toward giving greater leeway to wayward Kurds and recently disempowered Sunnis. It took the hard-nosed reality of Zarqawi’s entry onto the Iraqi scene to find Sunni Anbar tribesmen, Kurdish peshmerga, the votaries of Sadr City, and the Shia State of Law government in Baghdad eventually tugging, if only temporarily, on the same end of the rope. Interestingly, it is the very presence of the odious figure—whether in the form of a squalid Catholic fascist or a bomb-happy Islamic extremist—that provides the edifying grounds; once they shuffle off, it is back to the same old story of ethnic centrifuge.

The problem with Syria is that there are two odious figures, Bashar al-Assad and Abu Bakr al-Baghdadi, and modern neoconservatism cannot seem to decide which one to hate more. In the days of the Spanish Civil War, the choice was obvious, and that was not for lack of noticeable shortcomings in the other great totalitarian “-ism” involved in the struggle. As Adam Hochschild explained in his new book on the subject, Americans in the International Brigades were quickly disabused of the notion that fighting for communism and for democracy necessarily dovetailed. Regiments were tracked by commissars. Prominent volunteer leaders were tortured or killed if their sympathies were found to be more Trotskyite than Stalinist. Men such as Hemingway and John Dos Passos developed a lifelong distaste for leftist politics, and Orwell famously took his reservations out to pasture, so to speak.

Yet they also appreciated the folly of fighting both moral contagions simultaneously; one had to be prioritized over the other, and from the vantage point of the 1930s, fascism was the more looming threat than communism. At a precarious time when differences between the factions of the Syrian “mainstream” prevent any semblance of a unified front, and when Western enlistees trailing into Syria are not exactly venturing there to do democracy’s bidding, then perhaps a truer lesson for McCain to have gleaned from Berg was his pragmatism rather than his esprit.