Netanyahu Can't Predict What Trump Will Do Next 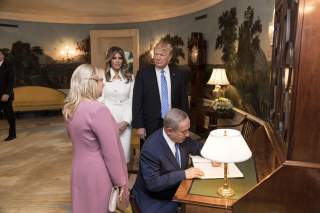 During his campaign for the U.S. presidency, Donald Trump repeatedly stressed that Israel does not have a better friend than himself. So why has the level of anxiety in Jerusalem regarding the president’s visit this week reached such heights? Actually, the anxiety is perfectly understandable given that it is rooted in important recent developments in Washington, Jerusalem and Ramallah. By themselves, these developments are not the cause of Jerusalem’s anxiety. Instead, it is the growing recognition of its failure to anticipate these developments that has shaken Jerusalem’s confidence in its ability to prepare for what is coming next.

President Trump’s Israeli host, Prime Minister Benjamin Netanyahu, has already seen much of his expectations for the new U.S. administration—and the expectations of his part partners and part rivals in Israel’s right-wing governing coalition—shatter. Gone are their earlier hopes for the fading of America’s commitment to the two-state paradigm, for a free hand for West Bank settlement expansion, and for an early move of the U.S. embassy from Tel Aviv to Jerusalem.

Instead, reality seems to have quickly sunk into the White House. The president’s foreign-policy and national-security team now realize that if the Israeli-Palestinian conflict is to be resolved, then there is no alternative to the two-state framework. More surprising, however, is that President Trump has demanded and received a de facto Israeli freeze of settlement construction in the West Bank beyond the large blocks. Also, the moving of the U.S. embassy to Jerusalem has been firmly placed on the back burner, at least for now.

Jerusalem’s failure to anticipate these about-face decisions reflects more than the simple error of taking campaign promises too seriously. Instead, they result from a number of realities, some Israeli and some American. On the Israeli side, strategic intelligence regarding all matters American remains in the hands of the prime minister, not in Israel’s intelligence community. This has been the case for some decades—from Yitzhak Rabin to Ariel Sharon, most recent Israeli prime ministers were also their government’s case officers for Israel-U.S. relations. But this is even more so in the case of Netanyahu, who grew up in Pennsylvania, attended the Massachusetts Institute of Technology as a graduate student, worked at the Boston Consulting Group, served as a top Israeli diplomat in New York and Washington, and has enjoyed a large network of friends and associates among America’s political and financial elites. Netanyahu’s biography has convinced him that no one understands the United States better than he does.

Yet it would be very surprising if some of Netanyahu’s self-confidence in that realm was not beginning to erode. After all, it was only two years ago that he had lost his bet on the ability of the American Israel Public Affairs Committee, the Republican leadership in Congress and the evangelical community to derail the nuclear agreement with Iran. Now, the same Israeli ambassador who ill advised him to circumvent President Obama, by trying to persuade a joint session of Congress to vote against the nuclear deal, has once again bet on the wrong horses. Thus, instead of waiting until the top tier of the president’s professional team was in place, Ambassador Ron Dermer moved early to identify himself—and by association, Israel—with the Steve Bannon–led ideological wing of Trump’s team, whose stock value appears to be diminishing by the day.

Netanyahu’s likely loss of self-confidence regarding the United States is probably compounded by a second development: A president whose skills in communication seem to best even Netanyahu’s. Indeed, it would be surprising if the Israeli prime minister was not amazed by Trump’s gift for manufacturing headlines on an hourly basis and was not mesmerized by Trump’s ability to master super modern social media, turning Twitter feeds into a weapon of mass destruction.

And then came the biggest surprise of all: the rapidly accumulating indications of Trump’s intention to dare the impossible—a breakthrough in Arab-Israeli peacemaking. Like many of the pundits in Washington with whom he has been associated for decades, Netanyahu probably dismissed Trump’s early expressions of his desire to achieve such a breakthrough (“wouldn’t it be nice if Jared could”) as reflecting the rookie president’s lack of experience—if not his ignorance—of the issue’s complexities. Indeed, had Netanyahu adopted Trump’s language he would have probably said: who would believe that a president who needs to tackle the U.S. public-health mess, the complexities of the immigration issue, legal obstacles to travel bans and the difficulties of legislating tax reform—who must attempt to avoid a nuclear war on the Korean Peninsula, with Russia over Ukraine and the Baltic states, as well as in Syria, and with China in the South China Sea—would give priority to resolving the Palestinian-Israeli quarrel?

Jerusalem’s next strategic surprise involved the reaction of key Arab leaders to Trump’s peculiar ambition. Instead of being unhelpful—as Egypt’s then president Hosni Mubarak was to President Bill Clinton’s heroic attempt at Palestinian-Israeli peacemaking in Camp David—current president Abdel Fattah el-Sisi, Jordan’s King Abdullah II and their Saudi counterparts are publicly encouraging Trump to dare the impossible and urge Israel to not miss the opportunity. More quietly, they now use every available channel to communicate to Netanyahu a message he stubbornly refuses to acknowledge: that while there is a new convergence of interests between Israel and important Sunni Arab states, it cannot be translated to a sustainable alliance without addressing the perception of a historical wrong. Worst of all, from Netanyahu’s standpoint, Trump seems to be receptive to the urging of el-Sisi and Abdullah and is further encouraged to pursue the impossible by senior members of his foreign-affairs and national-security policy team.

Then came a tactical surprise by the name of Jason Greenblatt. The Israelis, who anticipated dealing with the president’s son-in-law Jared Kushner, a senior member of the royal family, now found themselves probed by an unknown New York City lawyer. Even more shocking was the discovery that Greenblatt is highly intelligent, open-minded, a listener who does not claim to know everything, a person who seems to believe that there are two sides to every story (even more alarming) and who has, at the very least, some sensitivity and empathy toward the plights and fears of both sides.

Which brings us back to President Trump. For Israeli and Palestinian leaders who have for the last twenty-four years avoided the difficult decisions that could have helped materialize the promises of the 1993 Oslo Accords, the combination of Trump’s character—and his current political predicaments—comprise another source of headaches. Trump’s impatience and inattention to detail means that it would not be possible to derail him by presenting long lists of preconditions for negotiations. Instead, he will likely issue invitations to a summit with a set date and location and will leave the invited to guess the penalty for “no shows.”

Likewise, Trump will quickly recognize attempts to drown his negotiators in endless details and will threaten those attempting such games by shaming them on Twitter. And if anything, his more recent political predicaments—and the investigation that will now be launched by former FBI director Robert Mueller—will only further motivate Trump to attempt to change the conversation in the U.S. media by scoring a “win” that has eluded all his predecessors.

Another truly surprising contribution to Netanyahu’s nightmares is that, so far, the Palestinian side has not made any mistakes. Quite possibly, Palestinian Authority president Mahmoud Abbas is as terrified of Trump as Netanyahu, or he may be listening to advice that he has resisted in the past. Whatever the reason, Abbas expresses hope that Trump will succeed—in sharp contrast to the Palestinians’ own previous nightmare of a pro-settler Trump administration that would be totally deaf to Palestinians’ plights and concerns. The result is that the Palestinian Authority has been careful to refrain from presenting any preconditions for a relaunching of talks. This is extremely challenging for Netanyahu because he now has to tread very carefully, so as not to be blamed for a failure of Trump’s efforts.

The final factor contributing to Netanyahu’s nightmare is the difficulties he can expect should he attempt to repel Trump’s “suggestions.” Israeli leaders could resist Democratic presidents by appealing to the American Jewish community, 70 percent of whom vote for Democratic candidates for the presidency, as well as to senior Democratic legislators in both houses of Congress. Or they could resist the rulings of a Republican president by appealing to Republican leaders in Congress and to their evangelical supporters. But attempting such tactics with Trump would be to no avail as he is neither a Democrat nor a Republican. He owes nothing to the American Jewish community, a vast majority of which voted against him. He has managed to present himself as too wealthy to be pressured by wealthy donors, even those like Sheldon Adelson, who contributed millions of dollars to his campaign. And Republican leaders—those who in 2015 scheduled Netanyahu’s address to a joint session of Congress—would not dare treat Trump in such fashion. So it would not be surprising if Netanyahu’s nightmares include the image of him calling a political 911, only to discover that no one will answer his call.