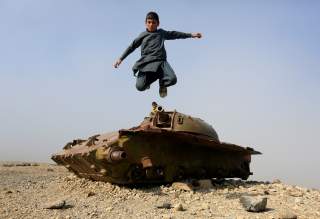 To his credit, U.S. envoy Zalmay Khalilzad has made remarkable progress in recent peace talks with the Taliban. It appears the latter group has now renounced any willingness to tolerate extremists from ISIS or Al Qaeda on Afghan territory under any future government in which it may have a key role. The United States has correspondingly indicated a willingness to downsize its military presence over time, and perhaps ultimately end it altogether, when conditions are right. We hope credible assurances on human rights are addressed, too.

But as Ambassador Khalilzad has himself underscored, there is no deal on anything until everything is agreed—and right now, we are still closer to the starting line than the finish line in negotiations to end this interminable conflict. As we approach the eighteen-year mark, it is already America’s longest war; for Afghans, it arguably dates back to the Soviet invasion of Afghanistan forty years ago. But even if Afghans, Americans, and other NATO/foreign forces are tired of fighting, reaching compromise will be excruciatingly hard. The government of Afghanistan has not even been brought into the peace talks yet, because the Taliban refuse even to properly recognize President Ashraf Ghani, whom they see as a U.S.-installed puppet, or even the Afghan constitution, which they also see as American-imposed. Until negotiations occur Taliban and Ghani, it is hard to get too enthused about the prospects for peace.

If and when such talks do begin, a crucial element will be security—and the future of the nation’s security forces. Indeed, this may be the single hardest and most central issue of all to a durable peace. It is not credulous to believe that either Ghani’s government or the Taliban would trust each other fully even if a peace deal could be written and signed. Both would have to expect ruses and betrayal by the other. Thus, any deal would need to go beyond Ronald Reagan’s famous “trust, but verify” mantra, and be based on the logic of “trust, but verify, and watch your back.” A peace deal would have to allow some elements of protection for key leaders and partisans on both sides of the fight. That in turn requires a realistic way to preserve the military capabilities of the two sides for a time, rather than naively believing they can somehow meld together seamlessly and safely.

Right now, to the extent they even exist, the initial positions of the two sides appear unpromising—which is unsurprising at this point in a peace process. The Taliban, viewing Ghani and everything about his government as illegitimate, would likely demand the dissolution of the Afghan army, police, and intelligence services. At a minimum, the logic of their position would require that they control those security forces in any power-sharing arrangement, including through the positions of minister of interior and minister of defense. But this would allow them to carry out subterfuge, and the systematic dismantlement of existing army and police capabilities from within—a sort of silent, insidious coup. Such a danger must be anticipated, and should not be tolerated, by either Kabul or Washington.

Similarly, the Afghan government’s position is unrealistic. It has made enormous efforts for over a decade to keep Taliban fighters out of its ranks, given their suicidal and murderous tendencies if and when they do infiltrate. As such, Kabul’s likely instinct would be to welcome Taliban fighters into the future army and police—but only one by one, after careful and individual vetting, combined with a renunciation by would-be recruits of any enduring loyalty to the Taliban’s previous agenda. Americans might agree morally with such a stance, but it would not be a serious basis for compromise to end a war in which the Taliban have not been defeated and consider themselves to be negotiating from a position of strength. The other extreme, that both the Afghan government and Taliban would maintain separate armed forces, is a recipe for a new civil war as we see in South Sudan. Building trust and cohesion that leads toward full integration is essential for a durable peace.

What to do, then? The most promising concept is to work toward a ceasefire of some kind, as was witnessed last summer for several days, followed by an agreement to tolerate each other’s forces essentially in the positions they now occupy. They could all begin to report to regional commands that had representation from the Taliban as well as existing Afghan National Defense Security Forces and, perhaps, a third-party. Over time, in fits and starts, the units could begin to consider undertaking joint patrols, but this could proceed at a pace that was gradual and patient.

Today, the Afghan army is organized into seven regional commands; each of those controls several brigades, and each of those consists of several “kandaks” or battalions of almost one thousand soldiers apiece. The kandaks are the chief operational units that conduct offensive operations and also hold territory. Taliban “units,” such as they are, can consist of up to several hundred fighters in any given locality. Given their similar size, this then has the makings of a reasonable balance in numerous parts of the country.

Vulnerabilities would remain on both sides in any such arrangement—for the Afghan security forces, to Taliban raids and suicide attacks or vehicle bombings of the usual sort; for the Taliban, to U.S. airpower and Afghan military operations. So some kind of impartial, third-party monitoring would also be needed to assess and punish any noncompliance.

As for security within cities, where the Afghan police are paramount today, a different approach would be needed. The key idea in the short-term might be be to allow Taliban political leadership some degree of personal protection forces such as larger than normal private security details. There would also need to include some sort of common command-and-control arrangement to avoid surprises, coordinate movements, and defuse any tensions that arise. These should not be Trojan-horse-like militias in waiting, so it would be important to cap their size and ability to concentrate at no more than a few dozen personnel in any neighborhood or location. They would not displace the police in any locations, but in effect provide an overlapping presence—that would again require careful coordination and monitoring to address any spoiler activity and build confidence. Over time, as former Taliban were brought into the national police, and as mutual confidence grew, the need for these personal details would decline accordingly.

Details of any peace accord can and must be left to Afghans, of course. But it is important to begin to think about what kind of basic tradeoffs could satisfy the core demands—and mitigate the central insecurities and worries—of each side. And it is also important for Americans to support the Afghan government and not pressure Ghani to make concessions that could jeopardize the very security of the country. At the same time, Ghani and his government may need some cajoling to think more creatively about joint security arrangements, since without progress past the initial positions of both sides, the chances for peace in Afghanistan remain extremely remote.

Retired Col. Christopher D. Kolenda, Ph.D., a former commander in eastern Afghanistan, served as the secretary of defense’s representative in the 2010–2012 talks with the Taliban.