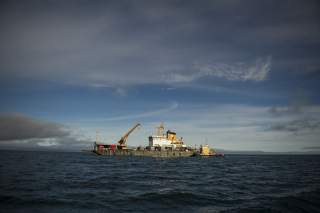 “The Last Frontier” might have just become the newest frontier in America’s emerging energy independence.

The October 4 announcement by Dallas-based Caelus Energy of a “significant light oil discovery” in Alaska’s North Slope has breathed new life into the state’s struggling oil industry, which has suffered from falling prices.

Alaska Gov. Bill Walker welcomed the find, saying, “We look forward to the discovery being turned into oil in the pipeline.”

In a statement, Caelus Energy CEO Jim Musselman said, “This discovery could be really exciting for the state of Alaska. It has the size and scale to play a meaningful role in sustaining the Alaskan oil business over the next three or four decades.”

The privately owned explorer said that based on two wells drilled in 2016 and 126 square miles of existing 3D seismic, the find in its Smith Bay leases may encompass six billion barrels, or up to ten billion barrels including adjoining acreage. The company says it expects to recover around 30 to 40 percent of the find, with the development having the potential to provide two hundred thousand barrels per day of light oil.

Should initial estimates prove accurate, the discovery could boost the state’s oil reserves by as much as 80 percent, and extend the long-term viability of the Trans-Alaska Pipeline System.

The company said it planned to build an $800 million, 125-mile pipeline to connect with the existing Prudhoe Bay pipeline infrastructure, with production forecast to commence as early as 2022.

While Wood Mackenzie analyst Cody Rice told the Wall Street Journal it would be a “massively complex, massively expensive undertaking to get that [oil] to market,” the company expects support from the state of Alaska and could benefit from forecasted higher oil prices.

With Alaskan oil production declining from a peak of two million barrels a day in 1988 to fewer than half a million barrels in 2015, the Smith Bay find is a vital shot in the arm to a state that has seen its contributions dwarfed by output in other parts of the United States.

It is also expected to provide a boost to U.S. crude production, which, according to the U.S. Energy Information Administration’s (EIA) most recent annual outlook report, is expected to resume its upward momentum next year on the back of higher crude prices.

Yet, despite the predicted overall upswing, Alaska’s contribution was forecast to continue to diminish toward daily production of just two hundred thousand barrels by 2040. With Smith Bay forecast to produce that quantity alone, Alaska clearly figures playing a larger role than anticipated in U.S. oil production.

The EIA’s report presented five possible scenarios through to 2040, with the most optimistic seeing daily U.S. oil output increase from 9.4 million barrels in 2015 to 17.7 million in 2040, although its reference case forecasts a more modest increase to 11.3 million.

Nevertheless, should low crude prices persist, U.S. production is forecast to decline through to 2028 and, despite a modest climb until 2040, would still not reach 2015 levels.

Regardless of which scenario ultimately plays out, significantly there is clear potential for U.S. energy independence within the coming decades. In fact, should oil prices rebound, or production efficiencies and reserve discoveries improve, the EIA’s report predicts that the United States will become a net exporter of petroleum and other liquid fuels by as soon as 2022.

Whether the Smith Bay discovery is sufficient to meet this scenario remains to be seen. However, even in its modest reference case scenario, the EIA predicts the net import share of U.S. petroleum and other liquid fuel consumption will fall to 7.4 percent by 2040, compared with 23.8 percent in 2015.

The notion of U.S. energy independence seemed a farfetched dream only a decade ago, with 65 percent of domestic consumption met by imports in 2005. Although the majority of U.S. crude oil and products imports are now sourced from Canada, the remainder is predominantly sourced from the Middle East, Venezuela and Russia, whose persistently tense diplomatic relationships with Washington seem unlikely to improve in the foreseeable future. The lesser the energy reliance the United States has on its less predictable trading partners, the better, in terms of energy security and geopolitical leverage.

But despite the United States’ status as the world’s largest oil producer, and its growing influence as one of the largest exporters, it continues to import oil at a record rate that nearly hit seven hundred thousand barrels per day in late July, despite nearly reaching maximum storage capacity in some areas.

The explanation is in the mismatch between the quality of oil extracted from domestic reserves, and that which is most efficiently processed in U.S. refineries. The sweet light crude extracted from its large shale deposits is processed less efficiently in the United States, particularly in Gulf Coast and Midwest refineries, than the heavy sour varieties imported from Canada, Mexico, Venezuela and Saudi Arabia.

The Caelus light oil discovery will only further widen the divide between what is extracted and what can be economically processed domestically. Until there is more U.S. investment in light crude refineries, it will continue to be more economically sound for producers to import heavier sours, thereby preventing the United States from becoming truly oil independent despite likely becoming a net exporter within the next decade.

Still, striking black gold in Alaska, a state with the highest unemployment rate in the country, is welcome relief regardless of where it is refined. With the United States also expected to become one of the three biggest suppliers of liquefied natural gas by 2020, the nation’s surge toward energy-superpower status has received another welcome boost.

Image: The USCGC Sycamore anchors off the coast of Barrow, Alaska as the crew prepares for a spilled oil recovery system exercise during Arctic Edge 2012. Wikimedia Commons/U.S. Air Force