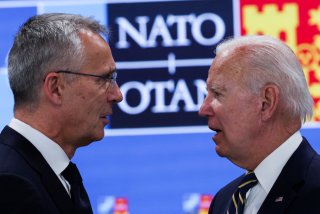 When the year 2022 began, few could have imagined that the West would witness the revival of an ancient vision: The lost territory of Atlantis, that mythical place of legend. Yet that’s what happened, beginning in the first year of the Russo-Ukrainian War: North America and Europe came together in a new, ocean-spanning geopolitical formation, popularly known as New Atlantis. And now that plenty of time has passed, it’s worth recalling how we get here.

As is so often the case with an alliance, New Atlantis emerged from the crucible of conflict: the Russian attack on Ukraine, which came to be seen as Russia’s attack on Europe, indeed, on all of Western civilization. That terrible violence cost tens of thousands of lives, displaced millions, and caused worldwide economic disruption. Yet amidst the tragedy, some notable impacts—which many recall as silver linings—could be seen:

First, it revived liberal nationalism; the West was snapped out of the narcissistic, even neurasthenic, ideologies of wokeism, pacifism, and isolationism. Indeed, Westerners were re-instructed in the enduring value of fortitude, loyalty, and courage. The wisdom of Winston Churchill—to whom Ukrainian president Volodymyr Zelenskyy is now compared—rang loud: “Courage is rightly esteemed the first of human qualities ... because it is the quality which guarantees all others.”

Second, Zelenskyy’s courage revived liberal internationalism. The American president, Joe Biden, eagerly assumed the role, if not the personal energy, of his Democratic predecessor in the White House, Harry Truman. (The greater energy emanated from Biden’s Achesonian secretary of state, Antony Blinken.) Biden and Blinken sure-footedly trod a narrow path, mindful of the difference between aiding and crusading. Indeed, it helped that Biden had lived long enough to know that the United States did best when it was aiding an embattled country (a doctrine associated with Richard Nixon and Ronald Reagan), and worst when it did the crusading itself (the doctrine of Lyndon B. Johnson and George W. Bush).

Meanwhile, other top Democrats, notably House speaker Nancy Pelosi—who had proved her realist credentials by strongly opposing the Iraq War—could also see the distinction between wrong-headed regime change and righteous regime defense. (As an aside, way back when, I, too, opposed the Iraq War.)

In 2022, other nations re-embraced, however fitfully, the liberal idea of collective security. Notably, Germany’s Zeitenwende: In June of that fateful year, Foreign Minister Annalena Baerbock summed it up: “This is the moment in which Germany says, ‘We are there when Europe needs us.’”

Third, 2022 also saw a revival of conservative internationalism, emerging from the ashes of Bush 43’s misadventures, as well as from the Republican Party’s MAGA detour. A key test came early on, in May 2022, when Biden asked Congress to vote for $40 billion in aid to Ukraine; the House voted “aye” 368-57, and the Senate, 86-11. Clear majorities of both parties. In fact, those lopsided vote totals actually exceeded the margins for the fabled Marshall Plan, which had been announced almost exactly seventy-five years prior. In addition, right-of-center governments—including in Poland, Britain, and Italy—rallied around Ukraine.

All that moral and material assistance enabled the Ukrainians to turn back the Russians. In fact, Ukraine was doing so well that cautious heads in the West feared a 1950-type overreach. That’s when American forces, having defeated the communist invaders, shifted from the defense of South Korea to the rollback of the North Korean regime. And so, Americans charged to the Yalu River, the frontier with China, only to find themselves now fighting Chinese “volunteers” —and thus dragging out the Korean War for three more years. With that grim precedent in mind, the imposed settlement on Ukraine was what one shrewd observer had prophesied from the start: a “dirty, contemptible compromise.” (Of course, the overthrow of Vladimir Putin made the deal easier for the Ukrainians to swallow.)

The Western victory strengthened NATO, of course, as well as the European Union, and yet some European leaders had grander ambitions. For instance, Guy Verhofstadt, a former prime minister of Belgium, put his large cards on the table even before the Ukraine War, declaring, “The world is developing into one not of nation states, but of empires. China is an empire. India is an empire. The U.S. is an empire. We need to create a European Union that is capable of defending our interests.” Verhofstadt has since been honored with the coveted annual prize ”for work done in the service of European unification”—and of course, that prize is named for the conqueror Charlemagne. (Across the centuries, Europeans haven’t changed that much.)

In that neo-Carolingian spirit, in 2022, France’s President Emmanuel Macron advanced the idea of an even larger European confederation, beyond the union. This proved attractive to Britain, which was then suffering Brexit Remorse. Yet England’s slow-motion reentry into Europe had a paradoxical effect: English reasserted itself as the preferred language. After all, in European meetings of all kinds, English was the one language that everyone knew—wits called it the lingua anglica.

Even before the Russo-Ukrainian War, democracy-minded internationalism was in retreat. The failure of the United States to establish stable democracies in Afghanistan and Iraq was a lesson; the ability of China to build “Market Leninism” was an even louder lesson.

Indeed, economists, once a mostly free-trading tribe, had come to learn that no-tariff commerce with low-wage, mercantilist countries led to deindustrialization and social disruption at home. Moreover, elites were chagrined to learn that while the nations of the world were economically interacting, they were not politically converging. As Macron said in September 2022, “The pandemic broke apart production chains. It re-regionalized, and sometimes re-nationalized certain production chains ... it de-globalized a significant portion of global production for the long term.”

But the crisis was deeper than just supply chains, which strategists agreed needed be re-shored as a matter of security. The deeper and blunter reality was that many around the world—from terrorists to tribalists, from religious zealots to autocrats in palaces, kremlins, and forbidden cities—emphatically rejected liberalism. Of course, anti-liberalism was hardly a new phenomenon; as George Orwell had written in 1940, totalitarians know that “human beings don’t only want comfort, safety, short working-hours, hygiene, birth-control.” Instead, he continued, they want “struggle and self-sacrifice, not to mention drums, flags and loyalty-parades.” A century later, the mailed fist still possesses its cruel appeal—and probably always will. To put the matter another way, the world really is diverse. Champions of globalism had settled for less than universalism; the most they could hope for was regionalism.

Indeed, given the obvious Otherness of much of the world, another other, the United States, guns and all, didn’t seem so bad. And so, the Eurocentrism of Monnet, Schuman, de Gaulle, and Macron gave way to a larger vision of shared values and interests on both sides of the Atlantic. Hence the revival of the idea of a place in between the two continents—and belonged to both. This was the Atlantis imagined by the ancients, as well as by latter-day figures such as Sir Thomas More and Sir Francis Bacon. The original Atlantis might never have existed in anything more than imagination, and yet now a new Atlantis was becoming tangible, stretching from America to Armenia. Indeed, as Marshall Plan Two led to a surge in the number of cargo ships and airplanes traversing the Atlantic, the ocean seemed sometimes to be almost solid, loaded with people and materiel. (Given the throng, the idea of the “Atlantunnel” took off.)

Yet just as light implies dark, just as positive presupposes a negative, a rival region emerged. The Huntingtonian Clash of Civilizations was real, same as it ever was. For their part, the Russians, even after Putin, hoped that their prison-of-a-nation could exist as an autarkic regime—that was, after all, an idea with deep roots in Russian culture. At the same time, energetic Russian diplomacy had conjured up geopolitical front groups—the Collective Security Treaty Organization, Eurasian Economic Union, and the Eastern Economic Forum—as hoped-for bulwarks for Muscovy.

But most of all, Russia hoped that its “no limits” partnership with China, announced just days before the start of the Ukraine War, would keep Moscow’s place in Eurasia secure. Yet the surprising collapse of Russia led to its subordination to China; it was no longer a partner, it was very much the second of two in this axis of autocrats, even as China took the lead on Russia’s alliances, shifting their focus from Moscow to Beijing.

To be sure, China had its own problems. As de-globalization took hold, other nations concluded that the People’s Republic of China’s (PRC) human rights record, as well as its continued fondness for coal, made it a bad trading partner, and so supply chains were rerouted to less scary partners. Speaking of scary, China’s endless, mindless, campaign against Covid phantoms—summoning up memories of the Cultural Revolution six decades before—caused internal weakening.