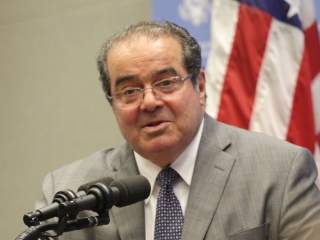 President Obama has less than a year left in office. Then seventy-nine-year-old Justice Antonin Scalia suddenly peacefully dies in his sleep of natural causes at the tony Cibolo Creek ranch in Texas. But was it natural? Or a little too convenient?

It took hours after his death to find a justice of the peace. Presidio County Judge Cinderella Guevara then pronounced Scalia dead without ordering an autopsy or seeing his body. The Washington Post reports, “‘As a former homicide commander, I am stunned that no autopsy was ordered for Justice Scalia,’ William O. Ritchie, former head of criminal investigations for D.C. police, wrote in a post on Facebook on Sunday.” Ritchie added, “my gut tells me there is something fishy going on in Texas.”

The fact is that the questionable actions of Texas authorities, which are probably due more to incompetence than anything else, have created enough doubt to encourage a number of conspiracy theories. A good conspiracy theory is by definition airtight. It explains itself. It’s what political scientists like to call a nonfalsifiable proposition.

Already some on the right are pointing the finger at Obama as the chief culprit. It is Obama, they say, who had the motive to murder the conservative firebrand, to end the 5-4 dominance that the right enjoyed. Now, with a 4-4 split, a number of decisions are likely to support liberal positions, as they will be remanded to the lower courts, which are packed with Obama appointees.

Social media is running wild with the theory. But perhaps the most prominent advocate of a conspiracy is Alex Jones, the popular Infowars radio host. Obama’s next targets, we are told, could include Ron Paul or Donald Trump.  Jones stated, “this is the season of treason, this is the time of betrayal and we would be fools not ask” whether Scalia was assassinated. He added, “Obama is one vote away from being able to ban guns, open the borders and actually have the court engage in its agenda and now Scalia dies. I mean, this is hard core. I wonder if Clarence Thomas will die of a heart attack next week.” Meanwhile, the Drudge Report headline was, “SCALIA FOUND DEAD WITH `PILLOW OVER HEAD.’”

What would it have taken to murder Scalia? The Dallas Observer offers three possible scenarios, then seeks to debunk each of them.  The first is that he was smothered to death—much ado, as the Drudge headlines indicates, centers on the pillow found over Scalia’s head. Usually there is a sign of struggle, but the Observer notes, “sometimes the suffocation triggers a heart attacks, leaving the corpse without many of the signs of a homicide.” Second, he could have been poisoned: “the drug [succinycholine] doesn’t leave any direct traces, but it breaks down and leave[s] metabolites behind that can indicate a poisoning.” The catch? You need to perform an autopsy. Third, Scalia could have been gassed, but “there are usually telltale signs when a person is killed by” carbon monoxide.

Still, other conservatives are rolling their eyes at the brouhaha. At RedState.com, for example. Leon H. Wolf observes, “Generally, when a 79 year old man who was known to be in poor health is found dead in his bed with no signs of a struggle, reasonable people do not immediately include `assassination’ even if the deceased happened to be one of the most venerated figures in conservative politics.”

Still, the flurry of theories has also served as catnip for the liberal media, which has pounced on the story. So the “Scalia was murdered” angle has something in it for everybody. It’s gives the left a chance to tut-tut and for the more outré figures on the right a chance to gin up outrage. It’s revealing but a pity that even Scalia’s death itself is the subject of such sensationalism. It need never have happened if the Texas authorities had not proceeded in such slipshod fashion.