A New Era of Terror Money? 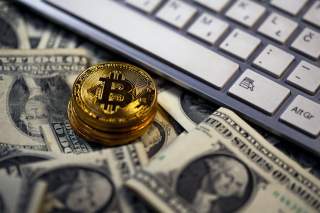 Bitcoin, along with other cryptocurrencies, has attracted considerable scrutiny in the past few months due to a consider run up in prices. While the press devotes a great deal of attention towards the crypto nouveau riche or the usual proclamations that the entire phenomenon is a bubble comparable to the tulip mania policymakers and regulatory authorities are preoccupied with a different set of concerns: the potential for terrorist and criminal organizations to make use of these financial instruments.

These fears are warranted. Bitcoin originally attained infamy as a medium to acquire drugs and other illegal narcotics off of darknet markets such as the Silk Road. To this day, Bitcoin is still used at times when transacting on the Silk Road’s shady successors. In the realm of terrorism, jihadis have gradually developed an understanding of how cryptocurrencies can aid them in their endeavors. In 2014, an article entitled “Bitcoin wa Sadaqat al-Jihad” appeared on an online blog and put forward various reasons for jihadist to embrace Bitcoin, explaining that the existing global banking system has “eliminated [charity] for jihad on a large scale” and presenting Bitcoin is a way to circumvent this system. More recent research has revealed that the Islamic State and other extremist outfits are relying on Bitcoin as a new fundraising mechanism in order to stay afloat.

Today Bitcoin is no longer the cryptocurrency of choice when conducting illicit transactions or attempting to move money undetected. The currency is not completely anonymous; rather, it is pseudonymous. Users are sending Bitcoin from their “address” to another address, with all of this information being recorded on a public ledger. Researchers from Qatar University and Hamad Bin Khalifa University have demonstrated that it is possible to exploit this model, writing that “historical pieces of information could be used to identify a certain user.” If one can tie a user’s Bitcoin address to some identifying piece of information (for example, a user’s Bitcoin address on his/her account on a fiat-to-cryptocurrency exchange), then a user’s identity can be revealed.

Those trying to hide their tracks have migrated to what are known as “privacy coins”: cryptocurrencies that are designed to grant users privacy in their financial dealings, often by obscuring the specific details of cryptocurrency transactions. The most well-known of these is Monero, which encrypts the user’s address and creates fake addresses to hide the original sender. The exact quantity of Monero being transacted is also hidden. The cryptocurrency is so secure that when authorities seized the holdings of Alphabay, a darknet market, they were unable to determine the exact quantity of Monero that it’s operator possessed.

Mercifully, the danger of ISIS and other organizations employing privacy coins is overstated at this time. As explained by a report from the Center for New American Security,

[terrorists] seek to move money from places outside the locations where they operate to the areas in which they plan and from which they launch attacks. Often they use many layers of intermediaries so that donors and ultimate recipients may not be known to one other. […] terrorists use the funds to buy things they need to sustain the group or to conduct attacks. And because they do so from the general economy, they often would need to reconvert the [cryptocurrencies] they receive into fiat currency. This final step introduces both an unnecessary layer of complexity and an increased vulnerability to the disruption of their operations by adding additional actors and entities into the fundraising matrix. […] But the final—and most important—reason that terrorist groups have not adopted [cryptocurrencies] at scale is that these groups, and individual terrorist operatives, have not yet perceived the need to do so. They still find it possible to circumvent global rules governing terrorist financing with sufficient ease and frequency that using [cryptocurrencies] is unnecessary. They exploit incomplete implementation of regulatory requirements and global standards at banks, use unlicensed and undersupervised money services businesses (MSBs), or simply cart around cash. As long as these value transfer methods are readily available, there is no great need to invest in new, complicated techniques to transfer value.

Likewise, a report from the Commission to the European Parliament from last year finds that “the technology is quite recent and in any case requires some knowledge and technical expertise which has a dissuasive effect on terrorist groups. The reliance on [cryptocurrencies] to fund terrorist activities has some costs and is not necessary attractive.”

As such, terrorists still prefer to make use of traditional fiat currency. Jennifer Fowler, the deputy assistant secretary for terrorist financing and financial crimes at the Treasury Department, stated that “although [cryptocurrencies] are used for illicit transactions, the volume is small compared to the volume of illegal activity through traditional financial services.” A recent study by the Foundation for Defense of Democracies and the cryptocurrency analysis firm Elliptic found that “the total percentage of identified ‘dirty bitcoins’ going into conversion services is relatively small. Only 0.61 percent of the money entering conversion services during the four years analyzed were verifiably from illicit sources, with the highest proportion (1.07 percent) seen in 2013.”

Nonetheless, regulators and counterterrorism authorities have begun to plan ahead in anticipation of cryptocurrencies one day gaining traction with terrorists. Speaking at the World Economic Forum in Davos last month, U.S. Treasury Secretary Steven Mnuchin called for other nations to join the United States in pursuing more extensive regulation of cryptocurrencies. He explained that his “number-one focus [is] on cryptocurrencies, whether that be digital currencies or bitcoin or other things, is that we want to make sure that they’re not used for illicit activities.” Under Secretary for Terrorism and Financial Intelligence Sigal Mandelker has urged financial institutions and regulators in Asia to do more in preventing illicit activity fueled by cryptocurrencies.

Policymakers are also keeping an eye on cryptocurrencies and are taking some proactive steps. The most notable action thus far is the introduction of a new bill by Republican Rep. Ted Budd titled the “Financial Technology Innovation and Defense Act.” Budd’s bill seeks to “establish an Independent Financial Technology Task Force” dedicated to “conduct[ing] independent research on terrorist and illicit use of new financial technologies, including digital currencies; and … develop[ing] legislative and regulatory proposals to improve counter-terrorist and counter-illicit financing efforts.” The report to the European Parliament concluded that “the most important element of vulnerability for [cryptocurrencies] is the fact that there are not regulated in the EU.” Both France and Germany intend to make joint proposals on regulating Bitcoin at the next summit of the G20 group.

Regulating cryptocurrencies will be a complicated affair; cryptocurrencies alone represent a new sort of financial asset class which regulators are still developing rules for. However, a few ideas have emerged. Both the reports from the Center for New American Security and the Foundation for Defense of Democracies/Elliptic provide suggestions, such as increased Know Your Customer and Anti-Money Laundering enforcement on businesses that transmit cryptocurrencies (particularly those that are unlicensed), a specialized commission or task force (like the one proposed by Budd), the creation of common compliance architecture, and so forth.

While these efforts may certainly help though, they will likely be unable to prevent every illicit transaction. The market will grow increasingly competitive as newer, more secure privacy coins and services such as decentralized exchanges (exchanges where a third party does not hold a client’s funds, instead facilitating peer-to-peer transactions) are introduced. In the coming years, expect more stories concerning the battles between financial regulators and counterterrorist experts versus terrorists and others that use privacy coins for nefarious purposes.

Carlos Roa is the assistant editor at the National Interest.