New Hampshire, Not Iowa, Is What Counts For Democrats 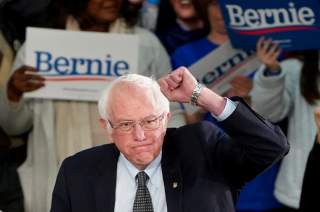 Does Iowa owe Democratic voters an 'app'ology? “This was the first event of 2020,” complained Financial Times columnist Edward Luce, “and is already feeling contaminated.” It appears that the state party was relying on an unreliable app to tabulate the results of the first Democratic primary. The result was chaos.

President Donald Trump, who won the Republican primary with some 97 percent of the vote, was crowing. On Twitter, he declared, “The Democrat Caucus is an unmitigated disaster. Nothing works, just like they ran the Country. Remember the 5 Billion Dollar Obamacare Website, that should have cost 2% of that. The only person that can claim a very big victory in Iowa last night is `Trump’”. Actually, this isn’t quite correct.

The inconclusive nature of the primary may serve to benefit the Democrats. For one thing, it helps Joe Biden, who appears to have scored badly. He’s moving on to New Hampshire, relieved that the uproar in Iowa is occluding attention to his poor showing.  Meanwhile, Bernie Sanders and Pete Buttigieg are saying they were victorious but they definitely were denied a victory lap. With Iowa up in the air, the candidates are rushing to New Hampshire. For all the hand-wringing over the inconclusive results, though, the national media should be celebrating that the brouhaha over Iowa will only serve to heighten interest in the New Hampshire.

Former New York city mayor Michael Bloomberg must also be enjoying the uproar over a primary that he declined to enter. If the candidates remain at a stand-off after New Hampshire, it ups his chance of being able to enter as the Fortinbras, who can survey the carnage to take charge of a battered and listless Democratic party.

This might be the ultimate nightmare scenario for Trump who has been focusing on trying to knock out Biden. His efforts may have been unnecessary. There doesn’t appear to be much of a groundswell for a Biden candidacy, at least so far.

What if it is Bloomberg who ends up capturing the nomination? Trump may end up learning the verity of the old adage of being careful of what you wish for. This is why the fact that the Democrats are in tumult isn’t necessarily to their disadvantage. This race was never going to be settled overnight. Instead, the candidates will have to demonstrate their bona fides over and over again to a skeptical primary electorate. In this regard, Iowa wasn’t an anomaly but symptomatic of the uncertainty that has seized Democrats searching for a savior to unseat Trump.

For Trump, who faces no real opposition in his path toward being renominated by the GOP, the contrast with 2016 could hardly be starker. Back then, he was assailed as an interloper. Senator Ted Cruz even refused to endorse him in a speech at the convention in Cleveland. That was then.

Now Trump has unified the GOP or, to put it more precisely, forced it to surrender to him. When it comes to the GOP, Trump is master of all he surveys. Tonight, as he awaits acquittal from the Senate over impeachment, his State of the Union speech, “the Great American comeback,” as his advisers are titling it, will offer an opportunity to present himself as above the fray, immune to the petty squabbles afflicting Congress while he steers the ship of state into safe waters.