A New Hope for Libya to Unite Against ISIS 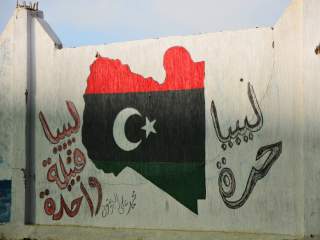 A sign of hope for Libya arrived in the Moroccan town of Skhirat last week when rival political leaders came together to sign a UN-brokered agreement to form a national unity government. UN Secretary-General Ban Ki-moon conveyed congratulations and caution, describing the agreement as “the beginning of a difficult journey.” But for a country abundant with jihadist enclaves, rival governments and 2.4 million people requiring immediate humanitarian assistance, it was the best piece of news in recent memory.

In the years since the NATO-backed ouster of Muammar el-Qaddafi in 2011, Libya devolved into anarchy and then civil war. As the United States and its NATO allies pulled back their presence and eschewed serious involvement in political stabilization efforts, hundreds of private militias emerged to carve out territory for themselves, at times occupying some of the country’s major ports and sources of oil.

By the time the negotiations in Skhirat had begun in earnest, the many factions, fighters and politicians had congealed into two rival Libyan governments: the House of Representatives in eastern Libya, which the international community recognizes; and the General National Congress, in western Libya, which is dominated by Islamists, including the Muslim Brotherhood. Representatives of both governments participated in the UN-brokered negotiations, and hopes are high that under the terms of the agreement, they will indeed unite into a single government.

But one faction with no seat at the table was the so-called Islamic State. Fifteen hundred miles from its heartland in Syria and Iraq, the expansionist caliphate has established a satellite ‘province’ on Libyan coastal territory, roughly 125 square miles and only 100 miles across the Mediterranean from European shores. Though dwarfed by the ISIS ‘mother ship’ to the east, the Libyan enclave is strategically vital to the group, a success story for it to propagate and a major threat to Europe. Like the myriad militias that established themselves in Libya during and after the war, ISIS has joined in the plundering of vast silos of weapons Qaddafi left behind throughout the country. It has won followers inside Libya and recruited thousands from the broader Maghreb, from Mali and Nigeria, and probably from Europe. It poses a special threat to Europe by virtue of its geographic proximity as well as the ease of transit across Libya’s porous borders and onto the Mediterranean. This is the ISIS branch that beheaded twenty-one Egyptian Coptic Christians earlier this year, incurring an Egyptian aerial assault. At the time, the assault appeared to be a one-shot deal.

But with the new UN agreement comes the possibility of a new turn against ISIS as well. It was no accident that the negotiations took place in Morocco, a pivotal member of the alliance against ISIS. Rabat played an important role in coaxing the Libyan parties to an agreement, and its intelligence services, deeply involved in the North African struggle against ISIS, is believed to have been paving the way for a coordinated attack on the organization’s Libyan enclave. Meanwhile, a new UK-sponsored Security Council resolution this week, endorsing the new national unity government, is also expected open the door for the Libyan government to invite outside powers into its borders to fight ISIS. On Tuesday, Ibrahim al-Dabashi, Libya’s ambassador to the UN, told the newspaper Asharq Alawsat that he expected airstrikes would be forthcoming—and named the United States, United Kingdom, France and Italy as likely participants in the assault.

In the months to come, the struggle against ISIS and the challenge to establish a viable Libyan government will be deeply intertwined. Who will pursue the campaign against ISIS on the ground? At this time the government itself is not even capable of securing its own capital—though in a phone call to the incoming Libyan prime minister, French foreign minister Laurent Fabius pledged France would be “at the side of the Libyan people to overcome the challenges confronting the country, starting with the securing of the capital, the return of stability and the fight against terrorism.”

The United Kingdom has meanwhile ruled out the deployment of its own combat troops, but has offered to send as many as 1,000 troops to join an Italian-led venture to help train a new Libyan army. For the time being, however, the strongest fighting force in the country is the anti-Islamist “Karama” movement, led by General Khalifa Haftar—a likely asset to any short-term coordinated push against ISIS.

Libyans understand that the military support they are about to receive from Europe and perhaps the United States will not outlast the West’s worries about ISIS in their midst. The challenge for the country’s politicians will be to take advantage of this rare moment of international focus and support to actualize the unity which the Skhirat agreement calls for. A chance like this may not come around again.