A New Phase in Middle-Power Adjustment to U.S.-China Competition? 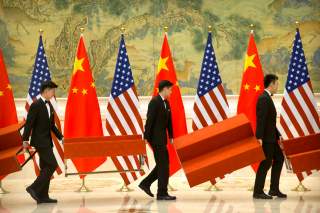 Observers of world order focus inordinately on intensifying strategic competition between the United States and China—with good cause: the two countries collectively accounted for about two-fifths of gross world product and half of global military expenditures last year, and there are few, if any, pressing global challenges that can be met without their sustained cooperation. Less examined, but no less important, is how their competition is affecting geopolitics outside of the “G2” aperture. One of the most crucial questions concerns how so-called “middle powers”—those that Australian National University’s Hugh White classifies as being “able to resist pressure from a major power without the support of another major power”—will undertake to safeguard their national interests if and as relations between Washington and Beijing continue to deteriorate.

White stirred considerable controversy with his 2012 book The China Choice, which called for a “Concert of Asia” that would include the United States and China—both of which would accept strategic parity with one another—as well as India and Japan. It also argued that Canberra would ultimately be compelled to align itself with Washington or Beijing. White’s judgment tapped into a lurking anxiety of other middle powers, especially those that border China, that their days of strategic hedging would, too, be numbered.

One might roughly deconstruct those powers’ approach to U.S.-China relations over the past two decades into three phases.

Between China’s accession to the World Trade Organization, marking its major debut on the global economic stage, and the onset of the global financial crisis, few observers would have argued that Asia-Pacific middle powers would one day be compelled to choose. While Washington exhorted Beijing to contribute more to uphold the postwar order of which it had been such a self-evident beneficiary—hence Robert Zoellick’s 2005 call for China to “become a responsible stakeholder in the international system”—the gap in comprehensive national power between the two was sufficiently pronounced that it felt premature to adduce various flashpoints between them as evidence of systemic bilateral tensions. Countries such as Malaysia, Singapore, and Vietnam did not perceive much, if any, of an intrinsic conflict between the strengthening of diplomatic and military ties with the United States and the concomitant strengthening of trade and investment ties with China.

Between the global financial crisis and the end of the Obama administration, though, China’s gross domestic product grew from being roughly 35 percent as large as America’s to 60 percent. China overtook Japan as the world’s second-largest economy, became the world’s largest exporting country, inaugurated its Belt and Road initiative (BRI), and otherwise established itself as the principal motor of global growth. In addition, especially under Xi Jinping, strategic tensions between the United States and China intensified on a range of issues. While the two countries remained highly economically and technologically interdependent, and while they continued to collaborate on a select number of system-level imperatives—especially countering climate change and maintaining macroeconomic stability—competitive dynamics increasingly crowded out cooperative ones.

Middle powers became increasingly apprehensive about China’s military modernization and strategic ambitions, but they appreciated that they would be remiss to ignore the opportunity-cum-threat of its resurgence: the opportunity to benefit from its rapid expansion; the threat of economic coercion for challenging its foreign policy. They accordingly sought to maximize their freedom of maneuver between a United States in relative decline that was nonetheless essential to their security and a China in relative ascendance that was increasingly vital to their growth.

While that balancing attempt will likely continue to be a core characteristic of middle powers’ behavior, they may increasingly try to play a more proactive role—both in shaping U.S.-China competition and in avoiding its increasingly corrosive impact on the postwar order. Bonnie Bley, a research fellow for the Asian Power and Diplomacy Program at the Lowy Institute, a Sydney-based think tank, observes that Asia-Pacific middle powers are increasingly securing free-trade agreements with one another, conducting joint military exercises, and “banding together with minor and middle powers” on votes at the United Nations General Assembly.

Australia’s emerging sentiment could prove a harbinger of a more autonomous middle power diplomacy. In a major foreign-policy address this June in the run-up to the G20 summit, Prime Minister Scott Morrison exhorted his country not to “just sit back and passively await our fate in the wake of a major power contest.” Instead, he argued, as a responsible middle power globally and a significant power within the Asia-Pacific region, Canberra should strengthen its alliance with Washington, deepen its network of relationships across the region, and continue to develop bilateral and trilateral partnerships aimed at making the Asia-Pacific more stable, more prosperous, and more capable of fostering “collaboration on issues at the frontier of a changing world,” such as cybersecurity and infrastructure development. In brief, to borrow a phrase from Mao Zedong, Morrison wants Australia to “walk on two legs.”

China’s ongoing militarization of the South China Sea, intensifying pressure on Hong Kong and Taiwan, and growing use of economic coercion, among other measures, have only heightened regional anxiety about its strategic intentions. Unfortunately, though, middle powers are also increasingly nervous about America’s vector; with its emphasis on bilateral transactionalism, its skepticism of prominent international fora and institutions, and its tendency to treat friends and competitors similarly, the Trump administration’s foreign policy has compelled even longstanding allies to question the reliability of America’s role in world affairs. Even if the next administration hews to a more traditional course of engagement and works to resuscitate U.S. alliances in the Asia-Pacific region, regional leaders will still likely harbor concerns about the stability of its foreign policy.

While Asia-Pacific middle powers may feel the brunt of worsening U.S.-China relations, they are not the only ones affected. As Huawei expands its reach, for example, middle powers in Europe are increasingly experiencing pressure to “choose” between having their 5G networks developed by China or by U.S.-funded European competitors such as Nokia and Ericsson. The choice may prove to be a false one: Elsa Kania and Lindsey Sheppard, two prominent observers of China’s technological progress, note in the new issue of Foreign Policy that “[a] number of companies based in the United States, European Union, South Korea, Taiwan, and Japan are also industry leaders and major providers throughout the supply chain,” belying Huawei’s suggestion that its “5G technologies [are] the only way for Europe to achieve a smarter future.” Still, Beijing’s coercive economic power looms increasingly large in Brussels: a recent European Council on Foreign Relations survey of fourteen EU member countries found that fewer than 20 percent of respondents in each believe that their economic interests are “well protected vis-à-vis China.”

Washington and Beijing would be remiss to assume that middle powers will be passive spectators to strategic gridlock between the two. At this year’s Shangri-La Dialogue, Singaporean Prime Minister Lee Hsien Loong observed that smaller countries in the region “are not entirely without agency” in managing U.S.-China competition; indeed, he continued, they are equipped to “deepen economic cooperation, strengthen regional integration, and build up multilateral institutions. This way, we can strengthen our influence as a group, and advance a collective position on issues that matter to us, be it trade, security, or technology.” Concerns about Chinese assertiveness do not obviate concerns about U.S. unpredictability; nor does the reverse obtain. If the world’s two giants accord greater priority to competing with one another than to forging more stable geopolitics, they may find that other countries ultimately play a starring role in shaping the postwar order’s laws, norms, and institutions.

That outcome would not necessarily be detrimental to Washington if the protagonists largely embrace its values and priorities—not in the short term, at least. The Trans-Pacific Partnership (TPP) offers a good illustration: while the United States abandoned the accord, the other 11 signatories—with Japan taking the lead—pressed forward and concluded the Comprehensive and Progressive Agreement for Trans-Pacific Partnership last March. It would be risky for the United States to assume, though, that its friends will invariably proceed in ways that comport with its national interests, especially if it is not wanted or present at the table. The more that they exclude Washington from their calculations, after all, whether because they seek to circumvent its reach or because they believe it would prove too distracted to play a sustained role in any deliberations, the more likely it is that incidental misalignments will grow into systemic differences.

Ali Wyne is a policy analyst at the nonprofit, nonpartisan RAND Corporation. Bonnie S. Glaser is a senior adviser for Asia and the director of the China Power Project at the Center for Strategic and International Studies.