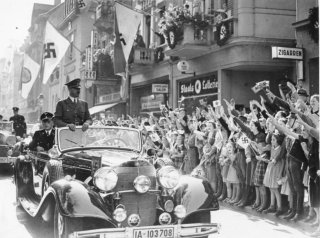 There are countless theories as to why so many Germans joined Hitler’s party, the National Socialist German Workers’ Party (NSDAP), but it is a subject that has seen relatively little empirical research. Jürgen W. Falter, widely regarded as the world’s leading researcher into NSDAP voters and members (he has written two reference works on the subject with a combined total of over 1,000 pages), has now tapped into new historical sources that provide answers to these questions.

In total, there are 10,000 pages of text—some from the time of the Third Reich, others from the period after— that shed light on what motivated people to align themselves with Adolf Hitler and his movement. Falter and his team have systematically analyzed these sources using the latest, computer-aided methods.

Falter’s findings in his new book Wie ich den Weg zum Führer fand (“How I found my way to the Führer”) are sure to surprise some readers. The NSDAP was an anti-Semitic party, but anti-Semitism was irrelevant, or at least not a motive given in the sources, for 60 percent of people who became party members. Even in the case of the 40 percent whose applications indicate they shared the party’s anti-Semitic outlook, this was not necessarily the main motive for joining. I was not surprised by this, because my own research on Hitler had shown that while anti-Semitism was a major feature of his speeches in the early 1920s, it hardly appeared as a motive in speeches during the period of his rise to power (1929–1932). Hitler knew that he could not win over the bulk of Germans with hostility to Jews, and Falter now shows “that anti-Semitism was a primary motive for joining the party only for a minority of NSDAP members.”

By far the majority of the 10 million Germans who joined the NSDAP between 1919 and 1945 did so after 1933. Many of them joined the party out of opportunism and for personal gain rather than for ideological reasons. It was different for those who joined the party before 1933. Among the early members, nationalism and anti-Marxism played a very important role, as did socialist convictions.

What attracted many people was the idea of the Volksgemeinschaft (“national community”), a concept that was often combined with anti-capitalism. Incidentally, this is particularly true of the anti-Semites among the NSDAP’s members, who often shared socialist ideas as well. “It may also seem surprising that the anti-Semites among the party members we studied were often socialist in outlook,” Falter writes. The roots of the links between Volksgemeinschaft, socialism, and hostility toward Jews can be found in anti-capitalism, as Hannah Weber writes in her highly readable chapter on “Anti-Semitism as a Motive for Joining the Party.”

It is interesting to note that quite a few party members came from “Social Democratic or Marxist-oriented families,” as Falter’s analysis confirms. The experience of World War I also shaped many National Socialists. “For propaganda purposes,” Falter explains,

Hitler and the NSDAP, with their promise of a Volksgemeinschaft that would overcome class antagonisms, in combination with the link between nationalism and socialism implied in their party’s name, successfully exploited the longing of many Germans for national harmony and unity that had grown out of people’s experience of the front-line and trench socialism.

Of the motives cited by former party members after 1945, socialism was actually “the most frequently mentioned ideology.” This may also be due to the fact that the denazification proceedings, whose reports Falter and his research team consulted, were about self-justification—and socialism was not initially frowned upon in the postwar period.

Above all, however, Falter shows that there was never a single, overriding motive that explains why people joined the NSDAP. There were a multitude of very different motives and paths to the NSDAP. The great merit of Falter’s study is that these motives and paths are not the subject of speculation, as is so often the case, but that the self-reports of contemporary witnesses are systematically evaluated using modern scientific methods of quantitative text analysis. Falter’s thorough analysis of these original sources ensures that his study avoids the risk of supplying overly simple monocausal explanations.

Rainer Zitelmann is a historian and sociologist and the author of the recently published book Hitler’s National Socialism.