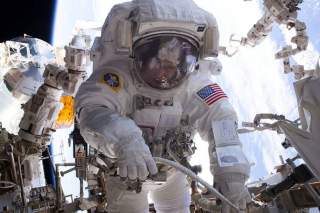 Speaking at the signing ceremony of this this new space policy directive, President Trump said that this policy was the first step taken “to restore American leadership in space.”

While reflecting how long it has been since a U.S. astronaut has been on the moon, Trump thanked his guest Harrison “Jack” Schmitt, one of the last Americans to be on the moon, and announced that he will not be the last one to be there.

The new space directive essentially refocuses America’s space program on human exploration and discovery. “This time, we will not only plant our flag and leave our footprint, we will establish a foundation for an eventual mission to Mars. And perhaps, someday, to many worlds beyond,” the president added. Pointing towards the role played by United States in outer space, Trump emphasized that this new space directive will ensure that “America’s space program once again leads and inspires all of humanity.”

The signing ceremony was attended by members of Congress and pioneers from NASA. Vice President Mike Pence, who is also the chairman of National Space Council, reiterated the point made by Trump about America’s prime position as a leader in outer space exploration. Pence called the new space directive “momentous occasion in the history of American space exploration,” and mentioned that during the National Space Council’s inaugural meeting in October, it was approved a recommendation to NASA to return American astronauts back to the moon.

Why the new space directive?

This new space policy directive raises many pertinent questions about the future of space exploration in general, and why, after thirty-five years since Apollo 17, this announcement has come out. If one tries to read between the lines, one thing that stands out prominently in the remarks by both the president and vice president is the sentiment that the United States will lead again in space.

The United States has always been a pioneer in the space exploration, since the 1960s and even earlier. The Cold War space rivalry between United States and the Soviet Union was one of the most interesting chapters of the modern history, because it not only intensified the rivalry between these two superpowers but, as a result of the rivalry and the zeal to outdo each other, a great deal of scientific and technological innovation considered unthinkable before was achieved. The field of aerospace engineering widened, and a lot of new jobs were created.

Replicating similar results may be part of the motivation driving the current approach. A restart of the space program would create many new jobs, which would come up in need to fulfill this ambitious undertaking by the Trump administration. The acting administrator of the NASA, Robert Lightfoot, said “NASA looks forward to supporting the president’s directive strategically aligning our work to return humans to the Moon, travel to Mars and opening the deeper solar system beyond. This work represents a national effort on many fronts, with America leading the way. We will engage the best and brightest across government and private industry and our partners across the world to reach new milestones in human achievement.”

This new space directive is also being seen as a vital step in achieving the strategic objectives outlined by the National Space Council. As per a report in the NASA’s website, “Work toward the new directive will be reflected in NASA’s Fiscal Year 2019 budget request next year.”

The possibility of a new Space Race?

Space is and has always been seen as a “strategic area,” which directly impacts the national security and defense of a country. With United States trying to enhance its capabilities, other states are observing these events very seriously, especially those with their own space programs.

Right now, one can’t say definitively whether this decision by U.S. government will lead to the reoccurrence of a space race like in the 1960s. A new space rivalry may seem like a distant prospect right now, but this new policy could certainly motivate other countries start refocusing and re-energizing their own space programs.

The “act of balancing” keeps developing in the international system, as smaller states try to build on their capabilities and restore a return to the global norm. At the same time though, the U.S. space program has become so big over the years that it’s highly unlikely that it will face a serious competitor any time in near future.

However, observers of international relations point towards the possibility of a competition between United States and China in future. The Chinese space program, which used to be shrouded in secrecy for a long time, is now coming up as a major player in the arena of space exploration.

Whatever the future holds in its basket, whether the world would indeed see a “Space Race 2.0,” one thing is clear: that after a long time, the issue of outer space affairs is assuming a central position in the discourse of both national and international security.

Image: NASA astronaut Peggy Whitson is seen during a spacewalk during Expedition 50 aboard the International Space Station. Whitson and fellow NASA astronaut Shane Kimbrough successfully installed three new adapter plates and hooked up electrical connections for three of the six new lithium-ion batteries on the International Space Station in this undated photo. NASA/Handout