A New Start for Afghanistan: 3 Massive Challenges That Will Decide Its Future 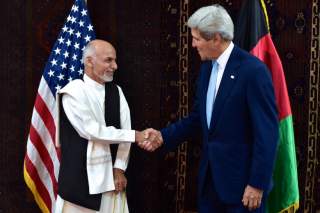 The inauguration of Afghanistan’s unity government two weeks ago was a historic event, marking the country’s first peaceful, democratic transition. It was by no means inevitable. After an election marred by massive fraud and a contentious and protracted postelection struggle, many Afghans were bracing for a return to civil war.

The unity government has had a promising start. Newly elected president Ashraf Ghani delivered a substantive inaugural address, focused on fighting corruption, catalyzing economic development and needed reforms and protecting democratic rights. Ghani’s prompt signing of a bilateral security agreement with the United States is a major step in repairing relations with Washington. And Ghani’s decision to reopen an investigation into the Kabul Bank scandal—in which the bank collapsed after senior Afghan figures stole close to $1 billion—is a signal that he intends to take corruption seriously.

1. Sustaining Political Unity: Unity governments have a sorry history in Afghanistan. A succession of unity governments since 1979, brokered initially by pro-Soviet communist factions and then by anti-Soviet Mujahideen parties, all collapsed.

The current unity government has several advantages over its predecessors. Most important is the fact that its leaders—Ghani and Chief Executive Abdullah Abdullah—are worldly and have internalized lessons of the past three decades. I know them well, and believe that they are committed to strengthening their fragile unity government. The two leaders have agreed to meet three times a week to build trust and tackle key issues together.

Ghani and Abdullah have their differences and there is a significant difference in the relative constitutional authorities of the two. The Afghan constitution has established a presidential system with substantial concentration of power in the presidency. It remains to be seen whether they can manage differences over policy, staffing, relative role decision making and constitutional reform issues. There could be tension between maintaining unity and governing effectively. Their first test is to agree on competent cabinet appointments. Forming a competent cabinet and appointing merit-based cabinet and lower-level officials should be the highest priority of the president, and the chief executive near-term decisions will shape deliberations in the Constitutional Loya Jirga two years from now. The Loya Jirga will consider amendments to establish a prime-minister position and define its authority over the executive branch. The Taliban and its supporters—understanding that influential figures in both the Ghani and Abdullah camps are not personally vested in the unity government’s success—are seeking to promote and exploit internal divisions.

To sustain the unity government, which Secretary of State John Kerry helped broker, the Obama administration will need to break its pattern of catalyzing national compacts, only to celebrate prematurely and disengage in the implementation phase. The chaos in Iraq today, to give a vivid example, has its roots in the Obama administration’s failure to ensure that agreements after the 2010 elections between prime-ministerial candidates Nouri al-Maliki and Ayad Allawi were carried out.

2. Achieving Key Priorities in a Comprehensive Reform Agenda: Ghani and Abdullah have agreed to a comprehensive reform agenda. The practical challenge now is to set priorities that can be addressed in a political culture in which implementation and follow-through remain relative weaknesses.

First, electoral accountability and reforms merit early attention. In the wake of recent elections, the unity government’s legitimacy with the Afghan people will depend, in large part, on how much political will it shows in pursuing political accountability for electoral fraud. Parliamentary elections planned for next year underscore the urgency of consulting with civil society and political groups to establish new, credible election commissions, nationwide implementation of plans for a national registry and electronic ID cards. Also, strengthening the environment for the growth of reform-oriented political parties should be a priority.

Second, it will be important to invest in new infrastructure. President Ghani calculates that China’s interest in Afghanistan’s mineral resources, its broader geopolitical and economic interests in Central Asia, the Middle East and the use of Pakistan Gwadar port will lead Beijing to invest in Afghan roads, railways and pipelines, actualizing the vision of Afghanistan as a regional land-bridge or roundabout. To initiate a discussion of this issue as a high Afghan priority, Ghani’s first state visit will be to China at the end of October. Such a Chinese investment in Afghanistan’s economic progress is consistent with American interest in Afghanistan.

As the new administration works to stimulate economic growth, it should prioritize systems that are not only sustainable, but enable broad, balanced growth. The remarkable success of Afghanistan's mobile telephone networks, which now cover more than 90 percent of Afghan citizens, provides a platform to extend basic financial transactions electronically. The national unity government has a rare and fleeting window of opportunity to promote inclusive, transparent, and financially sustainable national systems that would help the government deliver on its social contract with Afghans and reassure international donors that meaningful change has come to Kabul.

3. Promoting Reconciliation and Peace: Given that the combat role for U.S. and coalition ground forces is ending this year, maintaining security will require progress in reconciliation with the Taliban. The 2016 deadline set by the Obama administration to withdraw international forces is encouraging the opposite. The Taliban calculates that the fragile unity government may not survive the ensuing upheaval.

As with infrastructure investment, Afghanistan is hoping that China will facilitate reconciliation talks between the Afghan government, the Taliban and the insurgency’s backers in Islamabad. Given the strategic nature of Chinese-Pakistani relations, Beijing is in a strong position to influence the policies of the Pakistani security establishment. In the past, Islamabad has played the China card in response to U.S. pressure—a tactic that could be blunted by a U.S.-Chinese understanding on reconciliation.

Continued U.S.-Afghan security cooperation is vital for promoting reconciliation. A visit to Washington by the new Afghan team would advance talks on the post-2016 U.S. and coalition presence in Afghanistan, and thus, undercut the Taliban’s hedging strategy.

Overall, the inauguration of a new government led by two exceptional men represents a hopeful moment for Afghanistan. The formation of a unity government, however, is only the first step in a broader political process—one that requires the Afghans to deliver on reforms, and the United States to sustain its engagement in Afghanistan.

Zalmay Khalilzad was the US Ambassador to Afghanistan, Iraq and the United Nations.