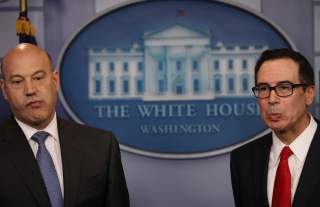 A friend recently recounted a story that’s as instructive as it is alarming. He told me about a conversation with a mutual friend—an older, conservative lady, well-versed in the dollars and cents of the nation’s finances, who let slip that she wasn’t sure she worried about the national debt anymore.

Specifically, my friend had asked her why the rising debt hadn’t tempered her immense optimism about the current administration. The answer? “I’ve been giving money for decades to these groups who say that a debt crisis is right around the corner, and yet, it’s never come.” Instead, she concluded, “things keep going quite well.”

Of late, it’s become fashionable in many circles to blame President Donald Trump or the Republicans for the increasing lack of fiscal sanity in Washington, but there’s a missing piece to the story that might seem counterintuitive coming from a fiscal conservative like myself. And that reason is we talk about the debt too much. My friend’s conversation illustrates the risks of forever crying wolf at the wrong problem.

Don’t get me wrong, I worry about the national debt, too—probably more so than most people. But there are problems with just focusing on the debt.

First, when is a fiscal reckoning supposed to come anyway? No one on either side of the political spectrum knows the answer to this question. Let’s be honest; my friend’s friend is right—many fiscal conservatives have been predicting doom and gloom for decades, only for it not to come. It shouldn’t be a surprise at this point that many have concluded, as Dick Cheney so famously did, that deficits don’t matter.

Economists have tried for years to answer the question of how much debt is too much, but even the most famous attempt—the groundbreaking-then-debunked-then-corrected Reinhart-Rogoff study is better known for its methodological issues than its otherwise reasonable conclusion.

But neither this study nor any other can tell us what level of debt is too much for the United States. If I knew the answer to this question, and indeed if anyone did, I’d be a wealthy man. Whether the level is 90 percent of GDP as in Reinhart-Rogoff or 200 percent and beyond as with Japan, or something entirely different is irrelevant. The question concerned Americans must ask themselves is this—why shift the terms of the public debate about fiscal issues to something we cannot know?

Here’s the God’s honest truth: The United States won’t be Rome or Greece anytime soon, and it probably never will be.

There’s another related point to make too. Why should anyone assume that consequences from too much debt would come all at once anyway? If markets are reasonably efficient at incorporating news and information as it becomes available, shouldn’t Americans expect more of a managed decline than an all-at-once catastrophe?

Of course, we know markets aren’t entirely rational and the efficient-market hypothesis is just that—a theory—but it’s still hard to square gloom and doom with a professed belief in the superiority of markets.

In fact, highlighting the national debt is only one potential way to decry how big government has grown. There are at least three different approaches to assessing the legitimacy of any particular government program:

1.) Is it constitutional? (i.e., is America’s government allowed to do it?)

2.) Will it increase the deficit and debt? (i.e., if the U.S. government is allowed to do it, can Americans afford it?)

3.) Will it increase the size and scope of the U.S. government? (i.e., even if the government is allowed to do it and Americans can afford it, should Americans do it?)

For too long, fiscal conservatives have focused on rationale two at the expense of rationale three. This is due as much to intellectual laziness as it is the genuine problem that it’s much more difficult politically to call for the end of specific programs than it is to rail about the debt generally.

However, talking points about the debt have infected more than just politicians—indeed, many other fiscal commentators and I frequently make this mistake as well. But if Americans want to start holding the debt in check (and taxes, for what it’s worth), then they need to start talking about what really matters—the size of government as measured by how much is spent.

As limited-government believers, we’re supposed to decry the size and scope of government above all else, because it’s the true measure of how much freedom is being limited. What’s more, government spending shows the extent to which resources are being taken out of the private sector (either today or in the future) and transferred to the less-productive public sector. The debt has little to do with this.

Of course, Americans can debate how much of a social safety net is appropriate, but the United States is well past the point where that is the relevant discussion to be having. (If only the programs America had were limited to social safety net programs!)

No, the U.S. government has grown beyond where many Americans would like to see it—so let’s start talking about that again, and the lack of political will to address it, rather than decrying the size of the national debt.

The fact is progressives like New York’s socialist icon Alexandria Ocasio-Cortez don’t have to explain where $40 trillion will come from to pay for policy priorities like Medicare for All because their base doesn’t care. And increasingly, neither does the Republican base—even for policies that were enacted. The immediate benefit of specific programs keeps outweighing wonky warnings about something that might happen at some point in the future.

But consider this—what if Ocasio-Cortez could find a way to pay for her programs? Should Americans support them then? The point about bloated entitlements isn’t just that they’re currently unaffordable—it’s also that they ineffectively provide services and waste society’s valuable resources.

Worrying exclusively about a growing national debt shifts Americans’ attention away from where it should be: on an ever-increasing government and the adverse ways it impacts everyday Americans. It is unhelpful to debate how soon the country will go to hell in a handbasket rather than focusing on real problems like the myriad tiny hells created by big government every day.

It might sound like a paradox, but if Americans truly want to address the national debt, then it’s time to stop talking about it and instead focusing on what really matters—how much America spends.

Jonathan Bydlak is the founder and president of the Coalition to Reduce Spending and the Institute for Spending Reform, the creators of SpendingTracker.org.