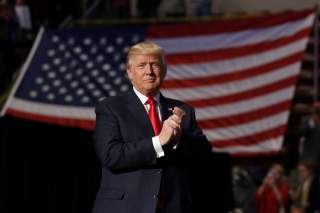 Before there was Kelli Ward, there was Stan Barnes. In 2004, Barnes, a conservative state senator in Arizona, challenged Rep. Jeff Flake in the Republican primary.

Flake, then a freshman congressman, was a staunch conservative in his own right. He was frequently a thorn in the side of leadership when it came to excessive federal spending and would occasionally criticize former President George W. Bush.

But Barnes had identified one issue on which Flake was vulnerable with the conservative grassroots: immigration. Flake, like the state’s senior senator John McCain, was an ardent backer of “comprehensive immigration reform,” a phrase used to describe the legalization of most undocumented immigrants in the United States combined with some conditions and new enforcement measures designed to distinguish the policy from “blanket amnesty.”

To many conservatives who cared about the immigration issue in places like Arizona, it was still seen as amnesty. And to anyone who had been paying attention, the amnesty that was signed into law in 1986—by Ronald Reagan, no less, after passing a Republican-controlled Senate—had demonstrably failed to reduce illegal immigration.

The Barnes campaign, like most immigration-centric Republican primary challenges of the era, failed. Flake was renominated, re-elected and would go on to the U.S. Senate. But Barnes did get more than 40 percent of the vote, at a time when even Republicans as liberal as former Pennsylvania Sen. Arlen Specter frequently survived their primaries.

Thirteen years later, Flake is waving the white flag long before he can face such a primary challenge. “It is clear at this moment that a traditional conservative, who believes in limited government and free markets, who is devoted to free trade, who is pro-immigration, has a narrower and narrower path to nomination in the Republican Party—the party that has so long defined itself by its belief in those things,” Flake said in a dramatic speech on the Senate floor Tuesday.

The Republican Party is still divided between conservatives and moderates, although the latter group keeps getting progressively smaller. The health care debate showed it mattered, in the Senate especially. It was impossible to come up with an Obamacare alternative that simultaneously satisfied the very conservative Sen. Rand Paul and the very moderate Sen. Susan Collins. Any further defections would sink any bill.

Increasingly, however, the most important divisions are between different kinds of conservatives. There were populist and nationalist undercurrents in the Republican base long before Steve Bannon was thrust into the national spotlight. GOP leaders as diverse as Richard Nixon, Ronald Reagan and George W. Bush were able to bond at a visceral level with these voters without sharing much of their ideology.

“Ideology” might not be the right word. What many of these Republicans—and President Trump—share might more accurately be described as a set of impulses: pro-American, patriotic, skeptical of foreign entanglements and supranational institutions, nostalgic for the country where they grew up and tired of hearing that country run down by liberal elites.

Bannon has hardened this into more of an ideology, or at least a political program. So has Attorney General Jeff Sessions, who despite his clashes with the president is arguably more “Trumpist” than Trump himself. And now Bannon is threatening to mount a series of primary challenges against Republicans who disagree.

These Republicans were shut out of the last GOP administration. Under George W. Bush, there was really no one with much power in the White House who favored less immigration or fewer foreign wars. The hallmarks of that administration were expansive immigration policies and a foreign policy defined by the Iraq War. Aside from a hiccup on steel tariffs, the Bushies were also free traders.

Even with Bannon out of the White House, it is clear that these arguments have gotten a hearing in the Trump administration. On foreign policy, they are currently losing. On trade, they are winning, since the president has been a committed protectionist since the 1980s. On immigration, the results are inconclusive, though Trump’s administration has been very different than Bush’s.

These Republicans of different stripes agree on many issues. It’s often pointed out that lawmakers like Flake, Sen. Bob Corker or Sen. Ben Sasse vote with Trump some 90 percent of the time. This is sometimes supposed to demonstrate the futility of Bannon’s primaries project; other times these statistics are brandished to show anti-Trump Republicans really aren’t that independent.

It is actually an exercise in missing the point. These stats reflect how often these lawmakers vote with Trump when the president himself supports a conventional Republican agenda. However much they may all agree on tax cuts or abortion, Sasse and Sessions are animated by different priorities.

This isn’t something particularly new. Robert Taft, Barry Goldwater and Jesse Helms are all rightly considered iconic conservatives. But the issues that drove each of them are all quite different.

The questions Flake raises about Trump’s fitness for office will fade in importance with the end of this presidency, whenever that might be. The debate over what it means to be a conservative won’t.