A New Type of U.S.-Japan Relations 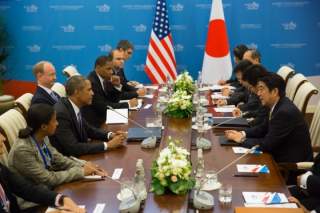 Prime Minister Shinzo Abe’s address to a joint session of Congress on April 29 should go down in history as a day of glory, not of infamy. Some serious critics will remain dissatisfied over perceived historical revisionism. Yet the fact will remain that the biggest antagonists in the Pacific War have forged a prosperous postwar system and a vigorous alliance. When the Prime Minister speaks to a full house of Senators and Representatives, he can be expected to offer humble remorse for the past, quiet pride in Japan’s remarkable seven-decade-long contribution to global order, and a roadmap for how the alliance can perpetuate a rules-based system well into the 21st century.

The latest evolution of the alliance will be encapsulated in new defense guidelines issued on the eve of the oration, which will be delivered in English. To be sure, the guidelines document itself will be unremarkable. Twenty-five pages of prose written by a bureaucratic committee describing allied roles and missions are not meant to be Shakespearean. Those seeking a coherent statement of strategic clarity will also be disappointed. Nonetheless, the guidelines will provide a gateway to an unprecedented degree of alliance capacity, comprehensiveness, and coordination.

In short, the new guidelines will mark a milestone along the path of converting a relationship between a victor and the vanquished into a mature security partnership between the world’s two richest democracies, capable of acting swiftly and in concert to address a full array of contingencies, from humanitarian disaster to war.

Although Japan’s search for an independent identity is longstanding, Prime Minister Abe has reified that identity and accelerated that quest. He has prevailed within his Liberal Democratic Party and seems likely to bring along his pacifist-minded Komeito ruling coalition partner by retaining Japan’s inherent defensive posture while simultaneously putting Japan on an equal footing with other major powers.

Many Japanese reasonably assume their contributions to international security deserve as much respect as those of other powers. When these Japanese reflect on the conceit of some Great Powers who assume that might makes right, and that the rule of law applies only to others, they can see the difference that democratic Japan can make.

Yet many Japanese also sense a perhaps equally gnawing fear that Japan could find itself marginalized on the world stage. It would not have been possible for Abe to advance a “proactive” contribution to peace without a widely shared assessment that the security environment in Northeast Asia is deteriorating, not least because of the uncertainty created by China’s rapid rise and growing assertiveness. Doubling down on the alliance with the United States while building up Japan’s national capabilities are the byproduct of this assessment.

Although Japan surrendered to the United States on September 2, 1945, peace between the former foes did not become official until April 28, 1952, when the San Francisco Peace Treaty signed the previous September took effect. This original alliance agreement was necessarily provisional, recognizing that Japan had been disarmed and was therefore incapable of exercising effective right of self-defense.

Eight years alter, the 1960 U.S.-Japan treaty (formally, the Treaty of Mutual Cooperation and Security between Japan and the United States of America) took into account a more equal partnership, albeit one in which the division of labor was complimentary but utterly different (viz., Japanese bases for American defense).

The 1960 treaty is a model of concision and can be summarized in a single paragraph. The allies pledge to uphold the United Nations Charter, to settle international disputes peacefully, and to refrain from “the use of force against the territorial integrity of political independence of any state.” Both vow to strengthen “free institutions” and promote “stability and well-being.” “By means of continuous and effective self-help and mutual aid [the allies] will maintain and develop…their capacities to resist armed attack.” They will consult regularly “whenever the security of Japan or international peace and security in the Far East is threatened.” The treaty’s famous Article V clause stipulates that each “recognizes that an armed attack…in the territories under the administration of Japan would be dangerous…and declares that it would act to meet the common danger….” Finally, U.S. forces would gain access to land, air, and naval bases, the terms of which would be governed by a separate agreement.

The alliance framework has held up all these decades, but periodic guidelines have been drafted to help define the roles and missions of the two allies.

The first set of guidelines, in 1978, was essential to modify roles in missions in light of a dramatically altered security environment.

In 1969, President Richard Nixon announced a new doctrine in Guam that placed called on allies to shoulder greater responsibility for their own defense; in 1972, Nixon made a surprise opening to China; the next year, an Arab oil embargo created a global shock by putting an end to the era of cheap oil; and in 1975, the Republic of Vietnam collapsed shortly after the last U.S. troops withdrew. Under this degree of change and uncertainty, it was no wonder officials in Japan were debating plans for an independent nuclear deterrent. The 1978 guidelines did not alter the treaty or Japan’s Constitution, but they did reassure Japan about America’s alliance commitments while paving the way for greater Japanese defense capabilities.

By the early 1990s, after the abrupt fall of the Soviet Union and the end of the Cold War, the U.S.-Japan alliance was set adrift. Defending against a Soviet force invasion and tracking ballistic missile submarines quickly lost their urgency. China’s rise remained a work in progress. But Iraq’s invasion of neighboring Kuwait and North Korea’s nuclear program in the hands of an untested second-generation Kim family leader, Kim Jong-il, were stark reminders that international and regional security required constant vigilance and adaptation. Alliance drift was too dangerous to the interests of both countries given the combination of immediate and possible future challenges. As Richard Armitage expressed the challenge on numerous occasions to those of us who had a hand in the process, the alliance would either be ready for a major Korean contingency or it would fail.

Thus in 1997, the 2+2 U.S.-Japan Security Consultative Committee, led by the allies’ defense and foreign policy chiefs, concluded a second set of guidelines. The 1997 revised defense guidelines reaffirmed the alliance’s role in the post-Cold War era, and particularly made it more operational in light of the very real threat emanating from the Korean Peninsula, in the form of potential sudden collapse or North Korea's missile and nuclear programs.

The third set of guidelines, largely driven by Japan this time, empowers the alliance to address emerging “grey zone” challenges of maritime coercion, operations in the relatively new domains of cyber and outer space, and to enact a permanent and flexible bilateral crisis management mechanism that can adapt to all hazards, from natural disaster to conflict.

Likely to remain virtually unspoken (a 2014 interim outline of the forthcoming guidelines mentioned China exactly once) is the readily apparently need to underscore deterrence and strategic alignment over how to deal with a more assertive and growing China. More than two-thirds of Japanese polled see China as a potential threat, and many Japanese are worried that their American friends do not share that assessment.

Yet the guidelines are more about enabling operational capability, not strategy. Even so, it is possible to see both continuity and change in the third set of guidelines to be issued at a 2+2 meeting just before the summit meeting between President Barack Obama and Prime Minister Abe in late April.

The main points of continuity are likely to be that the defense of Japan remains at the core of the alliance. Japan under Abe is not looking for conflict but rather grasping for more security in light of a rapidly changing security environment. The United States, for its part, wants to reassure Japan as to its security, as a means to preserving and adapting a stable and prosperous region. In addition, Japan will remain committed to a basically defensive posture as well as its three non-nuclear principles of not possessing, not producing, and not permitting the introduction of nuclear weapons on its soil.

But while the fundamentals remain unchanged, the scope and depth of the alliance’s operational capacity will enter a new era. A common operational system will be established with new technology backed up by political understanding. The technology involves interoperable and state-of-the-art command, control, communications and computers and intelligence, surveillance, and reconnaissance (C4ISR) systems. The political dimension emerges from the lesson of the 1997 guidelines. A bilateral coordination mechanism to deal with a crisis was never enacted in part because of the potentially escalatory signal it might send to other actors such as North Korea.